As parents of the 43 missing students from Ayotzinapa continue to search for their sons, a new report suggests drugs bound for the U.S. may have motivated the attacks. 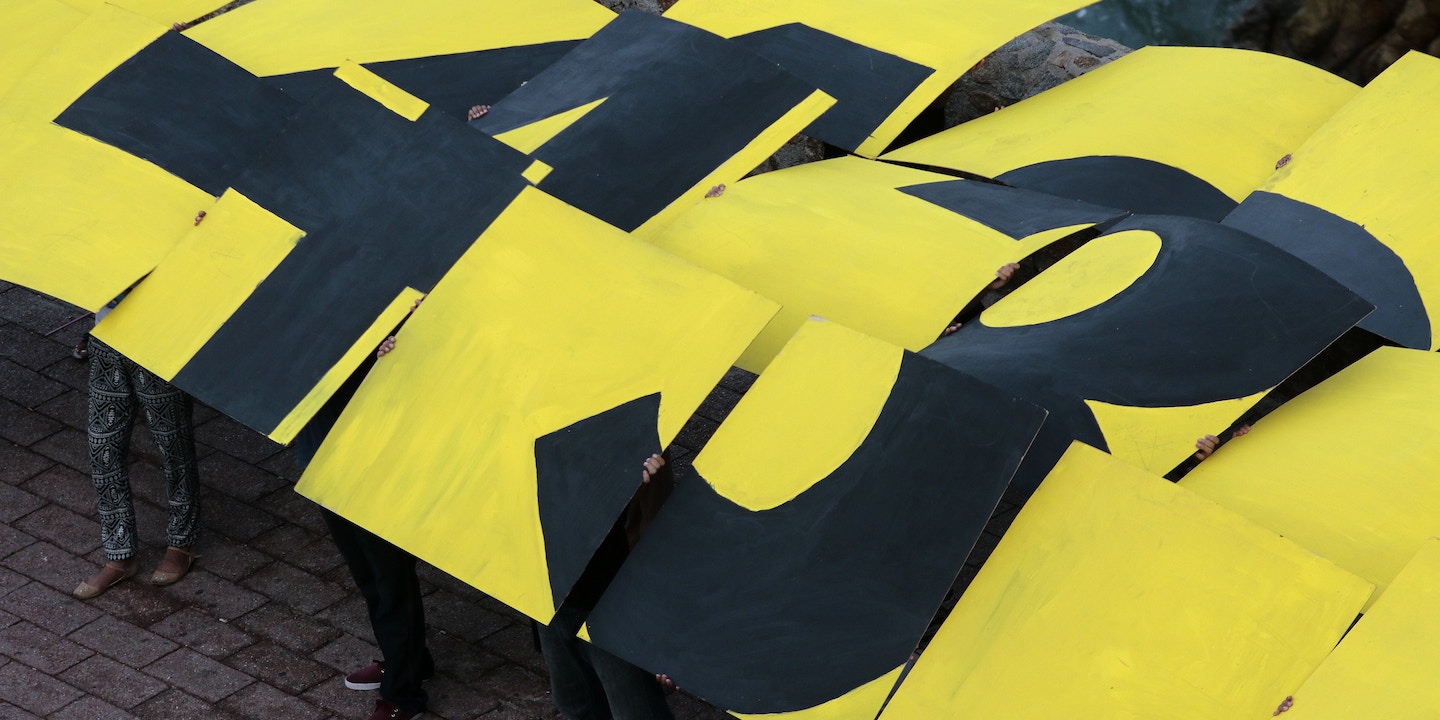 WE WERE GATHERED in his living room when Margarito Guerrero told the story. The 61-year-old, who insists you call him Benito, was dressed in jeans, a powder blue button-down shirt, and worn leather sandals. He sat in a metal chair, his straw cowboy hat alternating from his knee to his silvery head of hair. Generations of family photos hung on the walls of his family’s single-story brick home in Omeapa, a tiny community in the southern Mexican state of Guerrero.

Benito’s 19-year-old son, Jhosivani — Jhosi for short — had disappeared nearly two months before in a night of extreme violence, along with 42 of his college classmates. The country was on edge. Just a few days earlier, Mexico’s attorney general had announced, in a televised address, that the students had been snatched by police, handed over to a local drug gang, murdered, incinerated in a makeshift pyre, reduced to dust, and dumped in a river. For many, the story seemed either too neat, or too horrifying, to be true.

Benito, who rejected the government’s account, was recalling September 27, the morning after the students were attacked. He had found himself in a private room at the medical examiner’s office in Iguala, the city where the students disappeared. On the table before him lay a young man, the skin of his face removed in an act of savage cruelty. With his wife, Martina, outside in the waiting room, Benito was confronted with a terrible question: Was the corpse on the table his son?

The height and skin color seemed right, Benito thought. But there were scars on the hands that looked like cigarette burns. Jhosi didn’t smoke. Then again, there was a mark on one knee that resembled a scrape Jhosi had earned playing soccer, his favorite sport.

At a loss, Benito did the only thing that made sense to him at the time. He lifted the body off the table and hugged it close, attempting to gauge whether it felt like the weight of his child.

“Well?” Martina asked when Benito returned to the waiting room. “Is it my son?”

They would have to keep searching. 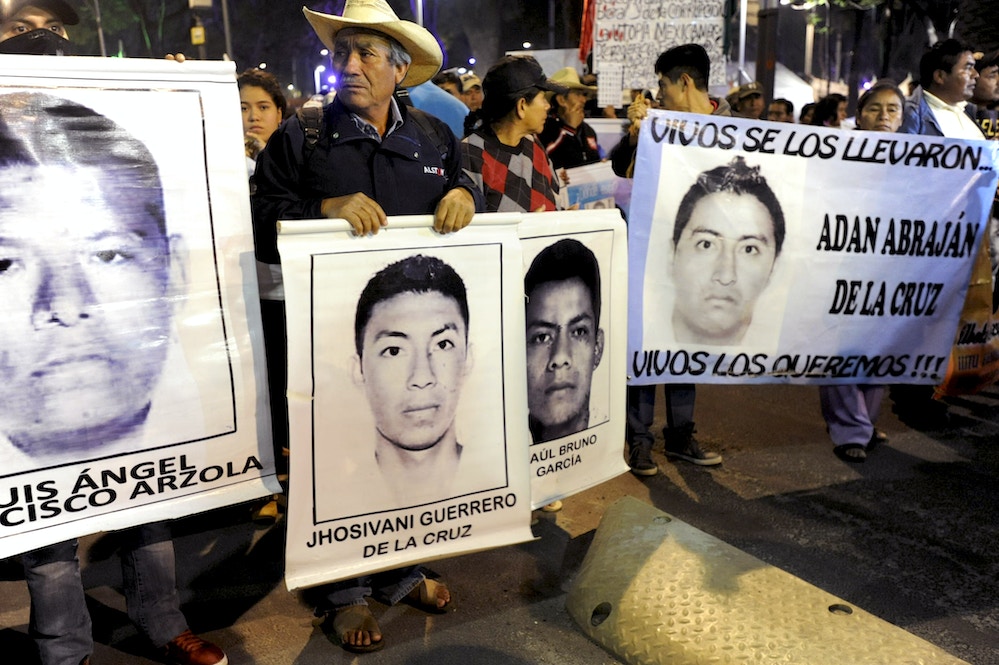 SATURDAY MARKS ONE YEAR since Jhosi and his classmates, so-called normalistas from the rural teaching college known as Ayotzinapa, disappeared. Twelve months, countless protests, and more than a hundred arrests later, the case, described by one former Mexican official as “the single most significant crime of the 21st century in Mexico,” remains as confounding and tragic as ever.

Earlier this month, a committee of independent international experts presented the chilling conclusions of its six-month examination of the Mexican government’s bungled investigation of the crime (confirming, in large part, the findings of a two-part Intercept report published in May). Appointed by the Inter-American Commission for Human Rights, the committee rejected the core conclusion of the “historical truth” offered by the office of Mexico’s attorney general.

“That event, as it has been described, didn’t happen,” Carlos Beristain, a Spanish physician and member of the committee, said at a press conference.

While its dismissal of the grisly incineration scenario generated headlines, the committee’s 560-page report also offered provocative new leads on a potential motive, including a link to drug trafficking to the United States. The committee specifically suggested that the students might have inadvertently commandeered a bus loaded with heroin and bound for the U.S. border.

Central to the committee’s probe was the “coordination” and “chain of command” required to carry out the night’s crimes in just a few short hours. There were nine attacks at multiple crime scenes, the report noted, with six people “extrajudicially executed,” over 40 people injured, and 43 students forcibly disappeared. Municipal police were described as the “direct aggressors,” while state and federal police and Mexican soldiers — at minimum — failed to intervene.

The commandeering of commercial buses — the activity that brought the students and security forces face to face in Iguala — is a long-standing, typically nonviolent practice carried out by students from Mexico’s rural teaching colleges. The vehicles are used to observe schoolteachers in remote areas and participate in protests. While confrontation with law enforcement is not unprecedented, the activity is generally tolerated. As the report noted, a communications system linking local, state and federal police, as well as the army, had monitored the normalistas’ movements in the hours leading up to the attacks, and identified them as students.

Seeking to explain why the students were met with such an uncommon level of violence, the report suggested the attacks were predominantly aimed at preventing any buses from leaving Iguala — which might explain why an unrelated bus carrying a semi-professional soccer team that had just played a match in the city was also attacked with lethal force. Screen grab from security footage of the fifth bus described in the independent expert report.

The report considered the circumstances that might have given rise to what it described as a “high-level objective that justified both any type of violence, however indiscriminate and evident, and the urgency with which it was carried out.” The report went on to cite a 2014 case out of Chicago, involving a defendant who was alleged to have led a Guerreros Unidos cell in the Midwestern city — the same drug gang accused by the Mexican government of bearing responsibility for the students’ deaths. The U.S. case included wiretaps of two cellphones with area codes associated with Iguala and surrounding municipalities, and in recorded conversations, the defendants described commercial buses outfitted with secret compartments used to transport heroin and drug profits across the border.

Was it possible that the students had commandeered a commercial bus that, unknown to them, was loaded with drugs headed to the United States — thus triggering a multi-pronged attack by Iguala’s security establishment, which has long been infiltrated by criminal groups?

Searching for answers, the committee focused on the existence of a fifth bus that exited Iguala that night, which has been described by students on board who survived the violence (one of whom spoke to The Intercept), yet has been consistently omitted in the federal government’s description of the attacks. Pressed by the independent experts to take the testimony of the fifth bus driver, the attorney general’s office elected to do so without members of the committee present; the resulting statement was deeply inconsistent with accounts provided by several normalistas and witnesses present.

When asked to produce the fifth bus for inspection, the attorney general’s office presented investigators with a vehicle bearing features that did not correspond with the recollection of the students. Expert analysis of video surveillance also revealed inconsistencies between the vehicles. Calling for further investigation of the potential trafficking link, the committee wrote, “The business that is carried out in the town of Iguala could explain the extremely violent reaction and the massive character of the attack.”

One of the other enduring mysteries of the Ayotzinapa case is the brutal murder of Julio Cesar Mondragon, the student whose mutilated body Benito held in the office of Iguala’s medical examiner. The Inter-American committee members pointed to the torture of Mondragon, a newly married 22-year-old who had recently become a father, as further evidence of the night’s unparalleled violence — and as one of many questions their report could not answer. The most important question of all — that of the students’ whereabouts — also remains unsolved. As Beristain, the Spanish physician, noted, “We have no evidence to support where the disappeared are.”

WHEN WE MET in November, Benito was still holding on to hope that Jhosi would come home. He described how, in a tragic way, the government’s mismanagement of the case provided cause for optimism. “With so many lies,” he explained, “it’s possible he is alive.”

In the months that followed, Benito, like so many of the school’s grieving and defiant mothers and fathers — some of the 700 indirect victims of the violence of September 26 noted in the Inter-American report — marched through streets across Mexico carrying a poster bearing a photo of his son’s face. “Vivos se los llevaron, vivos los queremos,” they would chant. They were taken alive, we want them alive.

In December, Mexico’s attorney general announced that a severely burned chip of bone reportedly recovered from a trash bag pulled from the river near the alleged burn site was a positive DNA match for 21-year-old Alexander Mora Venancio, one of the disappeared normalistas. The government clung to the link as proof of its “legal certainty” that all of the 43 students had suffered the same fate, even though no other student remains were discovered.

The renowned Argentine Forensic Anthropology Team (EAAF), brought on to conduct an independent evaluation of the investigation, confirmed the match in its own investigation but stressed that it could not confirm the government’s account of where the evidence originated.

Last week, on September 16, the government announced that the remains of another student had been positively identified from the materials reportedly pulled from the river: Jhosivani Guerrero de la Cruz — Benito’s son. The EAAF again reiterated that it could not confirm the provenance of the remains and added that the genetic evidence linking the remains to Jhosi was far less certain than it was in the case of Mora.

“We’re still looking at an open case,” the Argentine forensics team said in a press release. Despite earlier assurances that the families would be the first to know if any remains were identified, the team reported that Benito’s family had “only minutes” to absorb the government’s findings before they were publicly delivered. “No family should learn such sensitive news about the possible fate of their disappeared relative in this way,” the EAAF said.

“This isn’t the first time they tell me he’s dead,” Benito told journalist Melissa del Pozo, minutes after the news broke. “Until I see his body, he is not dead.”

The last time we spoke, Benito, in comments that would foreshadow the conclusions of numerous journalistic investigations and the findings of the Inter-American report, insisted the attacks on Jhosi, his classmates, and the other innocent victims gunned down last year must have been coordinated across multiple levels of Mexican security forces.

Top photo: Activists from the environmental watchdog Greenpeace demonstrate in Acapulco, Mexico, against the disappearance of the 43 Ayotzinapa students, Sept. 6, 2015.