Boehner leaves behind a career that is marked by a particularly extreme coziness with K Street. He once handed out tobacco industry campaign checks on the House floor before a vote on tobacco legislation. 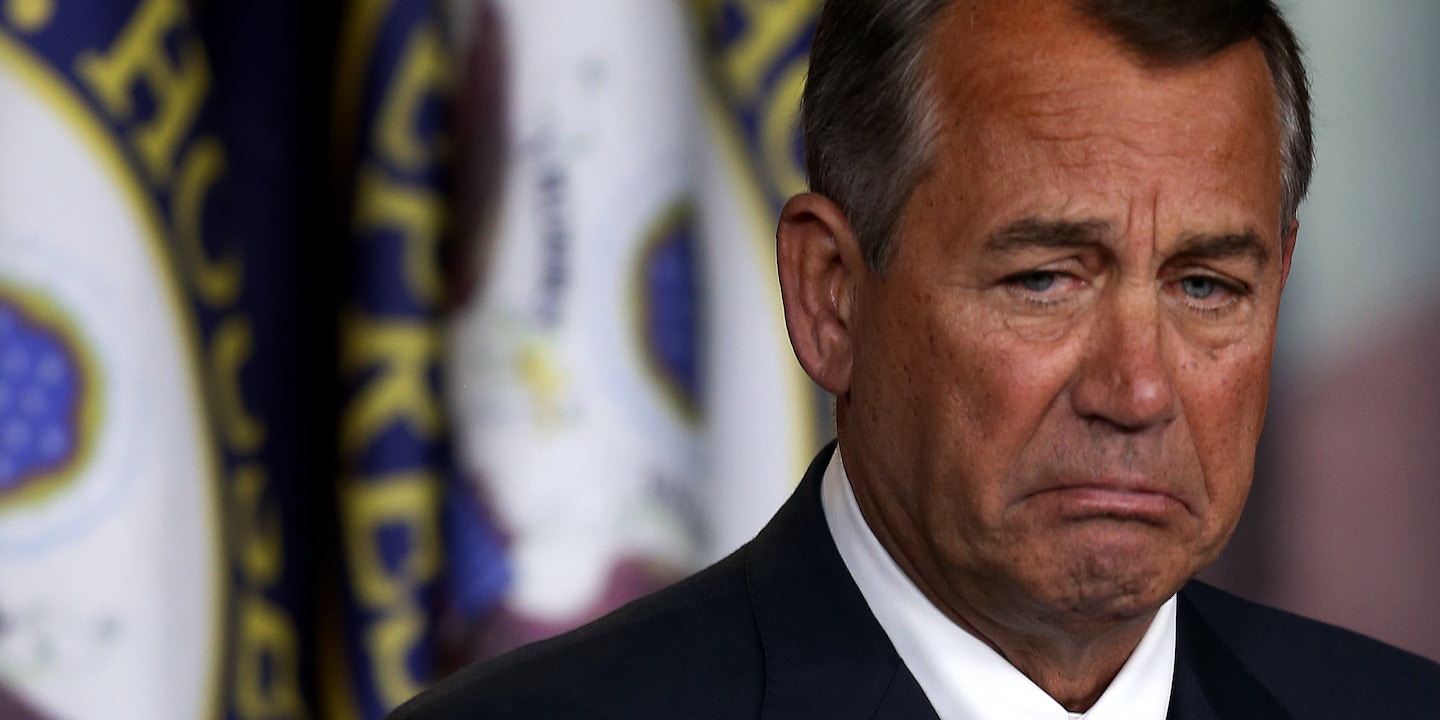 House Speaker John Boehner’s surprise resignation on Friday was reason to celebrate for members of his own caucus who often complained that he let corporate lobbyists exercise undue influence over Congress.

But for lobbyists, Boehner’s announcement was a reason to mourn.

“We are grateful for Speaker Boehner’s leadership in so many areas,” said Chip Bowling, the chief lobbyist for the corn growers industry. “Speaker Boehner’s departure will leave a hole, to be sure,” said John Engler, a lobbyist who represents the chief executive officers of major American corporations.

Other lobbyists used social media to express grief and salute Boehner’s tenure as speaker of the House:

A statement from former Sen. Norm Coleman, R-Minn., who now lobbies on behalf of the Saudi Arabian government, was tweeted by the Congressional Leadership Fund, a Super PAC that works to elect House Republicans:

CLF Chairman @normcoleman: "History will conclude that John Boehner’s leadership as Speaker of the House was an unparalleled success."

Kelly Johnston, a lobbyist for the Campbell Soup Company:

Two thoughts about @SpeakerBoehner's announcement. 1) I will miss him, thank him for his leadership under tough circumstances. (1/2)

David Schnittger, a former Boehner aide who now lobbies on behalf of Goldman Sachs, Medtronic, and Royal Dutch Shell, among others:

John Boehner will hand over the gavel of the speakership the way he accepted it: with humility, gratitude, and a love of God and country.

Gary Shapiro, the president and chief lobbyist for the Consumer Electronics Association:

It has always been pleasure working with Boehner over the years. He will be missed on Capitol Hill. These new... http://t.co/18fzacNbLZ

Lobbyists enjoy access to establishment politicians of both major parties. But Boehner leaves behind a career that is marked by a particularly extreme coziness with K Street.

He was once caught handing out tobacco industry campaign checks on the House floor before a vote on tobacco legislation.

In 2009, Boehner slowed down House proceedings to allegedly attend the “Boehner Beach Party,” an annual event hosted by lobbyists. Before he became speaker, Boehner served as the House GOP contact for regular meetings with lobbyists and convened a weekly meeting with lobbyists called the “Thursday Group.”

And for a period of time, Boehner rented a Capitol Hill apartment from a lobbyist.

As he raised millions from corporate political action committees, Boehner encouraged lobbyists to have a direct influence over the policy process. Under Speaker Boehner, the reverse revolving door became a blur, with more and more corporate lobbyists hired to manage the day-to-day business of key congressional committees and to serve as senior staff.

Boehner at one point called on bank lobbyists to be more aggressive when dealing with congressional staff, declaring: “Don’t let those little punk staffers take advantage of you.”

Even with a Boehner exit, lobbyists probably will not despair. House Majority Leader Rep. Kevin McCarthy, R-Calif., whose chief of staff is a former lobbyist and who is also known for his ties to the lobbying establishment, is expected to replace Boehner.

Speaking to Roll Call, John Feehery, a former GOP aide who now lobbies, was nonchalant about the shift. Boehner “had a very close relationship with K Street — that’s just kind of how it is,” Feehery said, adding, “McCarthy’s got a lot of good contacts on K Street, too.”