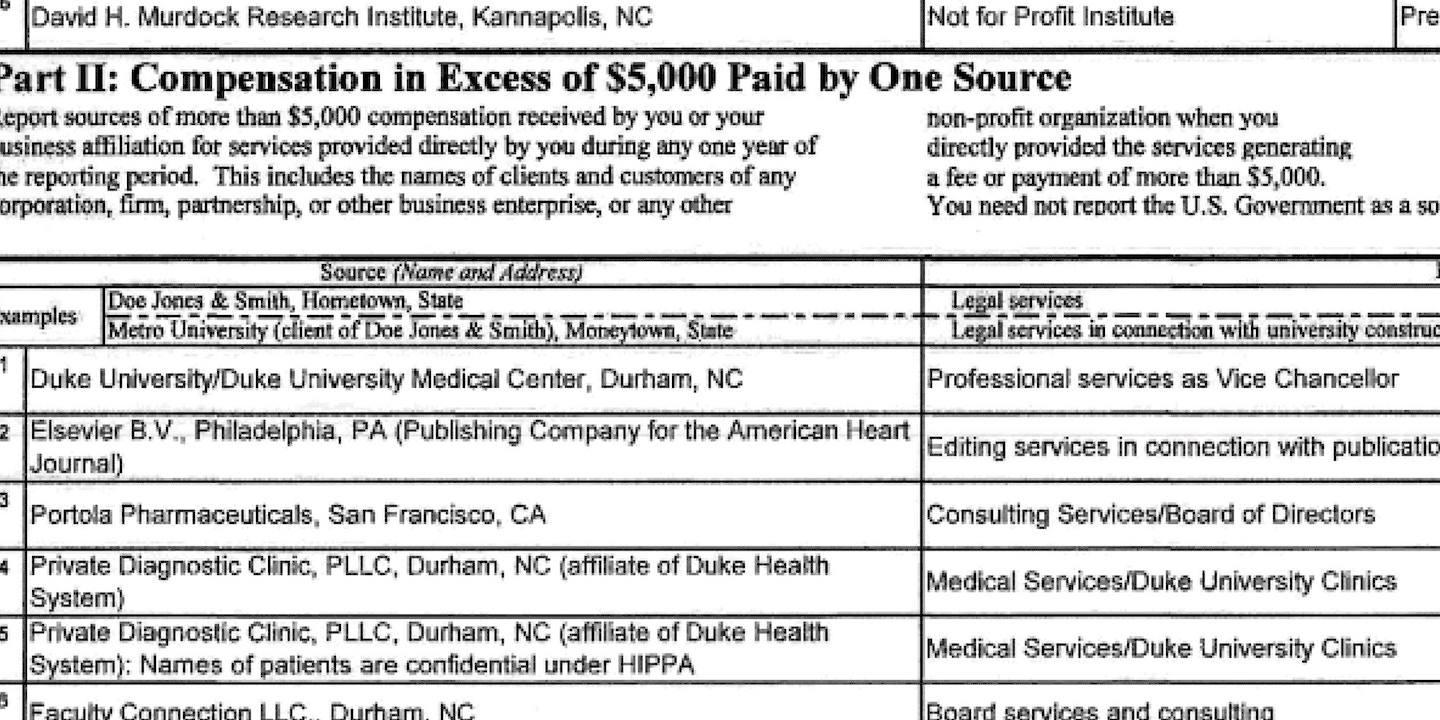 Dr. Robert Califf, whose nomination by President Obama to lead the Food and Drug Administration has come under scrutiny over his extensive ties to the pharmaceutical and medical device industries, previously directed a business that specializes in helping health care companies hire faculty members and other academic researchers to influence regulatory decisions.

Ethics forms and business incorporation documents show that from 2006 through this year, Califf served as a board member and consultant to Faculty Connection LLC. The company boasts that its team of “practicing university-based physicians and researchers” provides “regulatory consulting,” including expertise in FDA briefing reviews and other regulatory submissions to the agency. A promotional video posted by Faculty Connection displays images of Califf and boasts that the firm has “served over 175 different pharma, biotech medical device firms.” The video says the firm helps “faculty who want to work with industry” negotiate with health care industry sponsors, along with providing liability protection and record-keeping services.

Califf has previously come under criticism for his role in helping found the Duke Clinical Research Institute, which relies largely on pharmaceutical-company funding. In addition, he has collected significant consulting fees for work on behalf of a range of drug and medical device companies. A spokesperson from the FDA told the New York Times that Califf has donated all of his private sector consulting fees to nonprofits.

But the relationship with Faculty Connection has gone unreported.

The Faculty Connection website touts the experience of its consultants in influencing the FDA. Dr. Mona Fiuzat, a Faculty Connection consultant, “participated in the preparation for Cardio-renal Advisory Committee presentations to the FDA on behalf of drug sponsors,” according to her biography.

“Though he is attempting to divorce himself from his conflicts of interest with the industry, Dr. Califf’s ties are far too extensive to be manageable as an FDA commissioner,” says Craig Holman, an expert on government ethics at Public Citizen.

“While Dr. Califf’s contributions to the research and clinical science community are well-known and commendable, his cozy relationship with the pharmaceutical industry is simply too close for comfort — especially for those of us who are desiring tougher regulation of the industry and are fighting to keep drug prices down,” said Michael Weinstein, president of the AIDS Healthcare Foundation, in a statement.