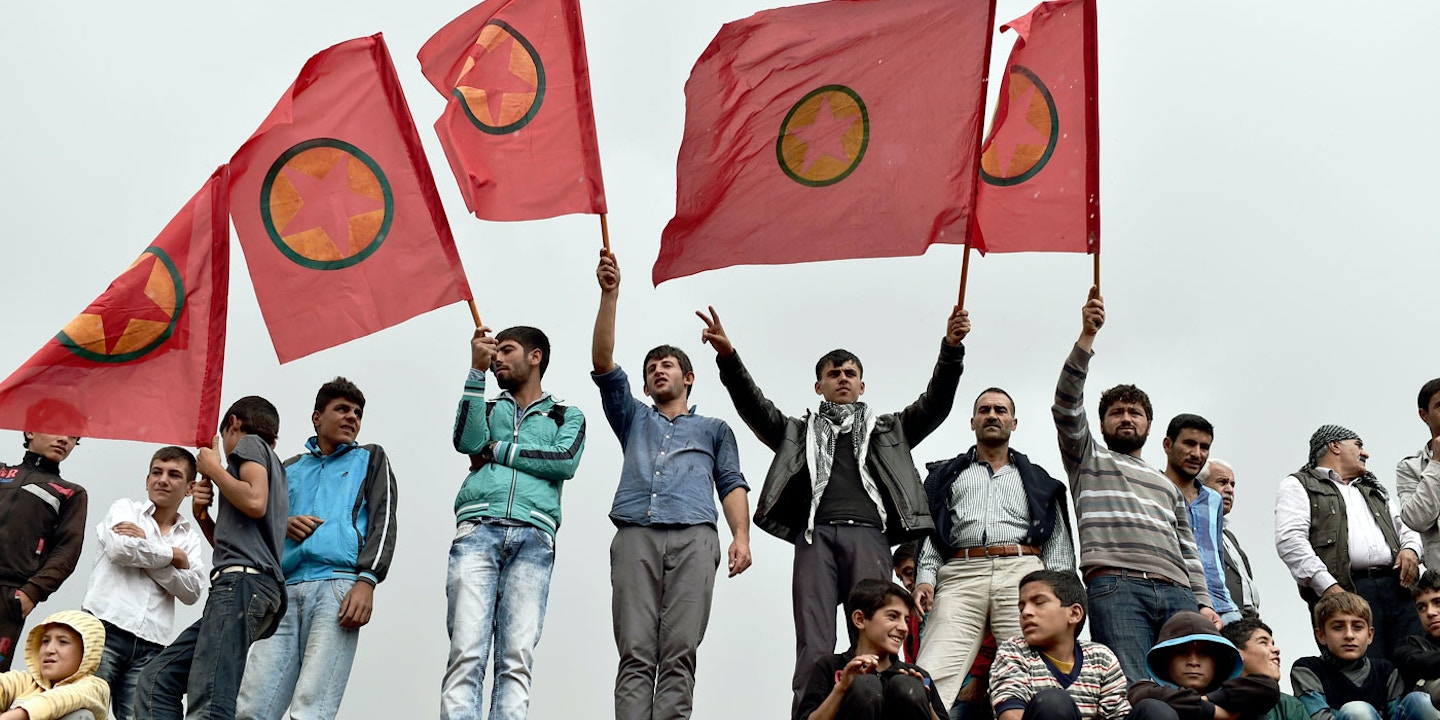 SINCE TURKEY JOINED THE U.S.-LED COALITION to fight ISIS, its military actions have struck far more Kurdish Workers Party (PKK) targets than ISIS targets, leading many to suspect that the government is using ISIS as an excuse to reignite the civil war against the PKK and intimidate the Kurdish population.

Critics argue, further, that Turkey’s failures to combat ISIS are calculated, given the Islamic State’s repeated attacks on Kurdish targets, such as the Suruc bombing last July and the Ankara bombing last month.

Turkish President Recep Tayyip Erdogan escalated his anti-PKK rhetoric last week, saying on Wednesday, “Turkey will continue its fight against Kurdish insurgents until every last militant is liquidated,” in his first major presidential address since his Justice and Development Party (AKP) won reelection on November 1. The announcement led to an almost immediate end to a monthlong ceasefire, igniting deadly clashes that have killed almost 200 since last week alone.

On Monday, clashes broke out in the Turkish city of Cizre when PKK fighters bombed a hospital, heavily damaging the facility and forcing the evacuation of 30 patients during the most recent wave of violence in the southeastern region of the country.

While the AKP won the most recent elections by promising stability — appealing to an electorate traumatized by a summer of ISIS-linked bombings and renewed violence in the south — the ruling party’s actions leading up to and following the elections have yielded greater insecurity and instability. First is the renewal of Turkey’s war against the Kurds in the guise of fighting ISIS.

“I am doubtful over whether AKP is afraid of the radicalization going on in society,” Dogu Eroglu, a locally based investigative journalist with the Daily BirGün told The Intercept. “After finding the best tool to contain Kurds both inside and outside of Turkey,” he continued, “there is no reason that AKP should give up on the opportunities offered by the existence of the Islamic State.”

Turkey has fought an on-and-off war with the PKK since 1984, when, in a bid for an autonomous Kurdish state with greater rights for Kurdish citizens, PKK militants launched their first insurgency against the Turkish government. Over the past three decades, the war has cost more than 40,000 lives, devastating villages in the southeast and forcing thousands to flee. Hundreds of Kurds have been jailed for alleged ties to the PKK, a terrorist organization according to both the Turkish and U.S. governments.

While Erdogan is credited with brokering a truce by instigating peace talks in 2013, the hope of stability was recently destroyed when, following Turkey’s decision to join the U.S.-led coalition to fight the Islamic State, Turkish fighter jets pummeled several PKK bases in northern Iraq — an alleged attempt to create an ISIS-free zone for Syrians fleeing the terrorist group. In reality, these actions — either purposefully or accidentally — caused more destruction to the PKK than ISIS, rendering the peace process meaningless, in the eyes of the rebel group, and catapulting Turkey into a two-front war between ISIS and the PKK.

“Since beginning a ‘two-pronged’ assault on both the Islamic State and Kurdish PKK separatists on July 24, Turkey has fired roughly 100 times more strikes at the PKK than the Islamists,” Metin Gurcan, a military analyst following the developments and former Turkish forces member, stated in a recent report for IRIN news agency.

For many, Turkey’s war on the PKK is also a war on the country’s Kurdish minority. They argue that Erdogan views the Islamic State — which has advanced on heavily Kurdish areas inside of Syria such as Rojava and Kobane — as a tool, rather than a threat, as ISIS continues to focus its attacks on Kurdish targets.

“Every single ISIS attack has targeted Kurdish people — or people showing solidarity with Kurdish people,” Ali Enid Esen, a 20-year-old survivor of both the Suruc and recent Ankara bombings, told The Intercept.

While the Suruc and Ankara bombings are the best-known — and most deadly — recent attacks, the Islamic State first targeted Kurds inside Turkey in the beginning of the summer, when People’s Democratic Party (HDP) offices were targeted in the southern cities of Mersin and Adana. A few weeks later, an HDP rally was bombed in the Kurdish-majority city of Diyarbakir. By the time bombs exploded in Suruc and two months later in Ankara, both times targeting groups of Kurdish and pro-Kurdish activists — and intimidating voters in the weeks leading up to the elections — many HDP supporters began to feel that, in addition to being under attack by the Islamic State, they were also being threatened by the Turkish government.

“Whether or not you believe they are working together, one is helping the other,” Esen continued, voicing his suspicion that Turkey’s negligence toward the Islamic State is actually a calculated foreign policy decision meant to use ISIS to intimidate the country’s Kurdish population.

One of the major causes for suspicion is the existence of intelligence concerning the attackers. The Suruc bomber and one of the suspected Ankara bombers — two brothers — had been under police surveillance since 2013, when their father contacted the authorities out of concern that his sons had joined an extremist group. Although the Turkish police listened to Yunus Emre Alagoz, who later blew himself up in Ankara, wish his brother well before his suicide mission in Suruc, the police neither intervened before the Suruc attack, nor intensified their surveillance to prevent the Ankara bombing.

“This attack was absolutely preventable,” Aaron Stein, a nonresident fellow for the Atlantic Council specializing in Turkey, told The Intercept.

Meanwhile, on the Syrian Border …

For communities living in the southern region bordering Syria, Turkey’s negligence in countering the Islamic State has begun to have serious consequences.

Last month, 22-year-old Syrian media activist Ibrahim Abdel Qader and 20-year-old Fares Hammadi were spending time together in their shared apartment in Sanliurfa, a city in southern Turkey only a few miles away from the Syrian border. The two men were members of Raqqa is Being Silently Slaughtered, a collective of Syrian journalists who travel between Turkey and the de facto capital of the Islamic State to document daily life inside ISIS-controlled areas. Once in Turkey, they upload and anonymously publish the images and videos, protected by the relative sanctuary of being on the Turkish side of the border.

The illusion of a sanctuary was shattered when Abdel Qader and Hammadi were found dead in their Sanliurfa apartment, their throats slit open in a signature ISIS-style execution.

“The apostates of Raqqa is Being Silently Slaughtered have been silently slaughtered,” a masked ISIS fighter sneered in a video, mocking the group’s name while claiming official responsibility for the attack. Although many of Abdel Qader and Hammadi’s colleagues have been similarly targeted — and murdered — for their work, this attack was the first that has been carried out inside Turkey. The killers have not been found.

The news sent shockwaves through the Syrian community, many of whom, even if they do not identify as activists or journalists, either work with Syrian organizations or have used the relatively safe atmosphere of Turkey to publish news or information coming out of Syria. The deaths signaled a change in the landscape — and the crystalizing reality that Turkey is no longer safe.

“I never thought this would happen here,” a Syrian activist who wishes to remain anonymous following the incident told The Intercept. “Who cares about the government,” he continued. “I don’t even feel safe in my own home.”