Tragic Farce of Anti-Refugee Threats: U.S. Was No Sanctuary for Syrians in the First Place

Perhaps the most pernicious effect of the governors’ stance against Syrian refugees is that Obama must defend offering to admit just 10,000 people. The political space to push for more is being foreclosed. 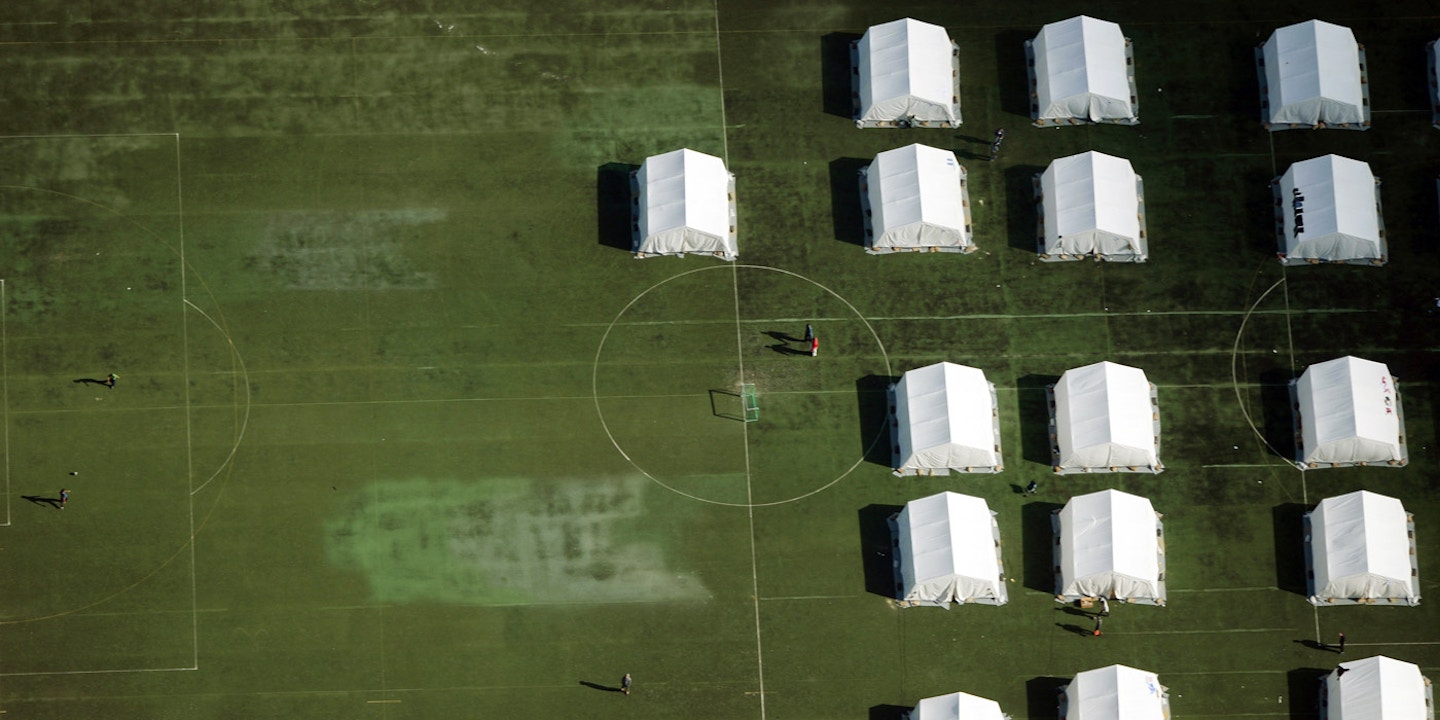 I’M CONCERNED for the education of Reese Kasich. The 15-year-old daughter of the Ohio governor and Republican presidential candidate, John Kasich, has reportedly received some troubling lessons from her father. In a foreign policy address Tuesday, the governor said he’s been explaining to his child why the U.S. should not accept Syrian refugees. “Reesy, you know, we understand these people are in trouble,” Kasich recounted saying. “But think about us putting somebody in our street, in our town, in our country who mean us harm. We can’t do that, can we, Reesy?”

For a teenager living in Westerville, Ohio (population: 36,120), I could imagine that 10,000 might sound like a lot of people. But I am keen to reassure Reese Kasich that she need not fear the U.S. government’s plan to accept 10,000 Syrian refugees over the course of the next fiscal year. This is a very limited number of extensively vetted individuals who go through the slow, staggered, and bureaucratically arduous process of refugee resettlement in the United States. No one is putting harmful people on your street, Reesy. Daddy’s trying to scare you.

Following the attacks in Paris last Friday, for which there is no solid proof of Syrian refugee involvement, more than half of U.S. governors — all Republican but one — and a number of conservative lawmakers stated that they would block the entry of Syrian refugees into their states. House Speaker Paul Ryan and Senate Majority Leader Mitch McConnell on Tuesday called for a “pause” in the program accepting refugees from Syria. Then, on Thursday, the House passed a bill that would see the program suspended until a stricter vetting system is established; the legislation now heads to the Senate.

Governors have no power to exclude refugees — federal agencies alone make those decisions. Their threats should be dismissed as the worst political posturing, but taken seriously as an index of the current atmosphere of ignorance and bigotry. The political will to block all Syrian refugees from this country is troubling, tout court. But it also gives the false impression that the Obama administration had planned to make much space for Syrians at all.

“The U.S. contribution towards resettlement has been really minimal, given the size of the catastrophe, and our capacity,” Eleanor Acer, senior director of refugee protection at Human Rights First, told The Intercept. In September, the president announced that the government would expand its refugee resettlement program to accept at least 10,000 Syrians over the course of the next fiscal year. Since 2012, about 1,800 Syrians have been granted refugee status in the U.S., after a process requiring 18 months to two years of vetting for each individual.

Obama’s announcement was met with little fanfare. David Miliband, president of the International Rescue Committee, called the offering “cold comfort,” while Oxfam’s vice president for police and campaigns, Paul O’Brien, said it “scratche[d] the surface.” Democratic presidential candidates Bernie Sanders and Hillary Clinton have both said that the U.S. should take 65,000 Syrian refugees. “A number of former government officials advised that the U.S. could admit 100,000,” Acer told The Intercept. Currently, there are 4 million Syrian refugees outside the beleaguered nation’s borders, and 7.6 million internally displaced people within.

The vagaries of geography mean that Europe is experiencing the largest movement of displaced people since the Second World War. Germany — which is one-quarter the size of the U.S. — expects to register 800,000 refugees this year alone; more than 100,000 of the refugees already registered for asylum are from Syria. Over half these applications have been granted. Turkey expects 1.7 million refugees to enter from neighboring Syria this year. For Europe, as The Guardian’s migration correspondent Patrick Kingsley wrote, the “passage [of refugees] cannot be avoided; it can only be better managed.”

Kellie Strom of Syria Solidarity U.K. stressed the need for establishing routes to asylum to undo the current and perilous aim of reaching European soil. “If refugees had a regular way of seeking asylum at embassies,” she told The Intercept, “or were able to board planes without airlines risking fines, then lives would be saved; millions of dollars would not be lost to the illegal smuggling market; and security measures could be applied in the same way as for other travelers, something not possible when thousands are landing daily on Mediterranean beaches.” Smuggler boats will not traverse the Atlantic Ocean; refugees from Syria will not simply arrive on American soil en masse. The U.S. has shirked international responsibility in offering so few Syrians sanctuary.

Perhaps the most pernicious effect of the governors’ opposition to any and all Syrian refugees is that — on the basis of what the president rightly has called “hysteria” — his administration must defend offering to admit 10,000 people. The political space to push for more is being foreclosed.

The U.S. admits around 70,000 refugees every year. Because of expansions to the program, the admissions ceiling is now at 85,000. This is no historic height; in 1993, largely as a response to the Balkan wars, the U.S. resettled 142,000 people. Bill Frellick, director of Human Rights Watch’s refugee program, told The Intercept that the U.S. refugee resettlement program is structured as a “durable solution,” which is a problem for those seeking a “tool of protection.” Frelick’s point is that the asylum process in the U.S. is stuck in a backlog, precisely because of the lengthy screening procedures involved and multi-federal agency checks. The procedure’s slow-moving gears partially account for the small offering made by the Obama administration toward Syrian refugees; admitting 10,000 Syrians over the next year actually amounts to working through a backlog of referral candidates already put forward, and vetted, by the UNHCR.

“Syrian refugees are vetted more closely than any other population. There are multiple screening levels, and candidates are interviewed in depth by the Department of Homeland Security while still overseas,” Acer said. She added that Congress is kept abreast of the sort of vetting process involved; lawmakers do not have the reasonable excuse of ignorance regarding the extensive security measures already in place.

Nonetheless, the bill passed in the House yesterday demands that Syrian resettlement be paused until even stricter screening procedures are established. The bill would require the three top U.S. security officials — Homeland Security secretary, FBI director and national intelligence director — to certify to Congress that each Syrian or Iraqi refugee is not a security threat before the refugee can be admitted into the country. The White House swiftly issued a veto threat; such extra vetting is time-consuming overkill, to say the least, when we are already talking about the most extensive, multi-level screening process the U.S. carries out.

“That’s the irony, and the obvious politicization of this issue,” Frelick told The Intercept, “that the focus is on refugee admissions, which are the most screened. The number of Syrians with diversity visas [obtained through a lottery and offered to nations with low immigration rates to the U.S.] far exceeds the number let in as refugees.” Marx, it seems, had a point when he commented that if history repeats itself and “all great world-historic facts and personages appear, so to speak, twice,” then it is “the first time as tragedy, the second time as farce.” If the space offered to Syrian refugees by the U.S. was at first tragically small, it is now being farcically scrutinized for political cachet.

Omar Hossino of the Syrian-American Council told The Intercept that his D.C.-based organization had written to the oppositional governors to invite them to meet with some Syrian refugee families and hear their stories, to convey that “no Syrian wants to be a refugee.” We should not have to implore powerful, elected representatives to look in the face of those few who have been granted asylum for them to understand the hydra-headed horrors of living under Daesh or the Assad regime and the need for refuge. But, then again, nor should we have to explain the foolishness of politicians seeing (or rather evoking) terror in 10,000 of the most screened potential U.S. residents. First as tragedy, then as bitter farce.

Top photo: Aerial view of tents at a camp for asylum seekers on the grounds of the former army barracks Schmidt-Knobelsdorf-Kaserne in Berlin, September 9, 2015.