Donald Trump’s neo-fascist campaign has been facilitated by many quarters of the U.S. media. He’s treated as humorous, but Trump is still standing above the rest of the field. 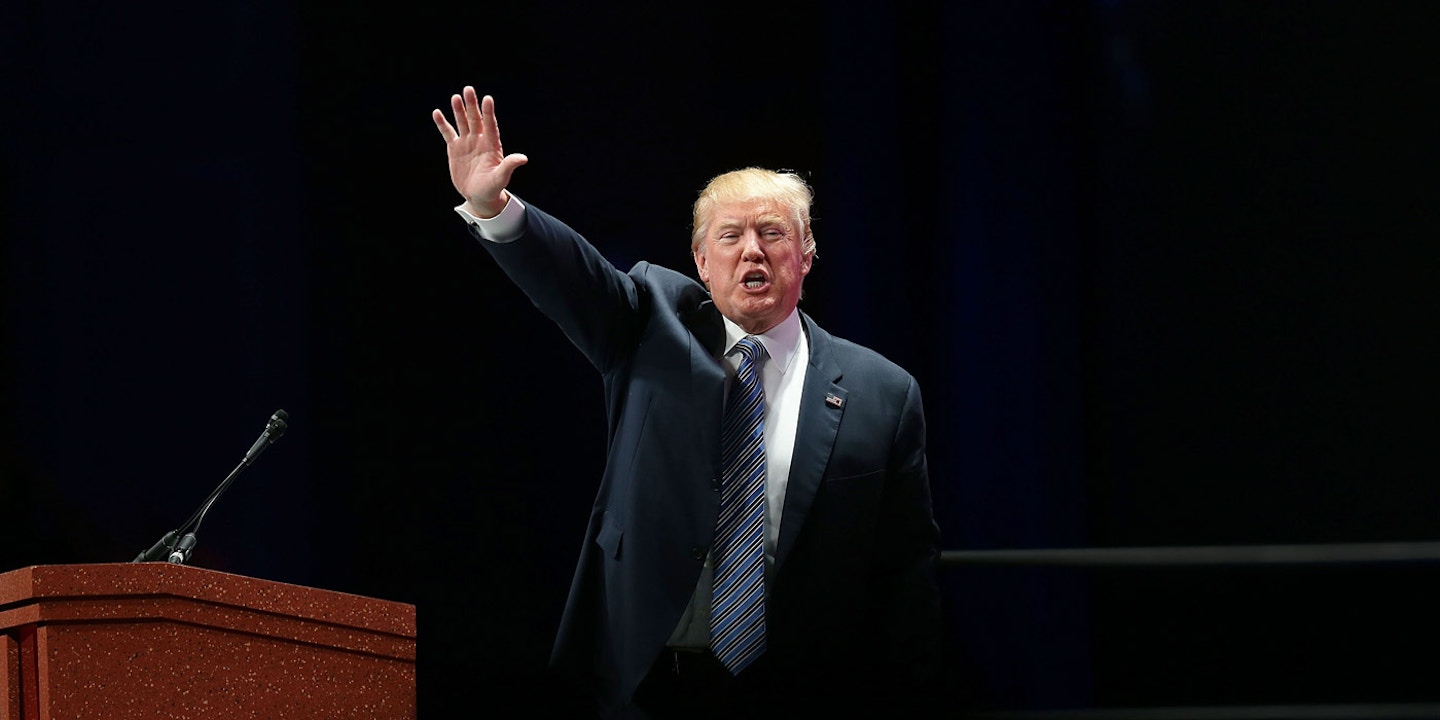 ON SUNDAY, DONALD TRUMP, the Republican presidential candidate who has led the primary polls for months, retweeted a graphic of bogus crime statistics regarding American homicide. The source for the numbers is the Crime Statistics Bureau of San Francisco — an entity that doesn’t exist. The tweet, which features an image of a menacing young black man wielding a gun, claims to break down murders in 2015 based on the race of offenders and victims. While the FBI publishes an annual homicide report that includes this type of data, it hasn’t yet been released — 2015 isn’t over. This logic, unsurprisingly, is lost on the Republican frontrunner. 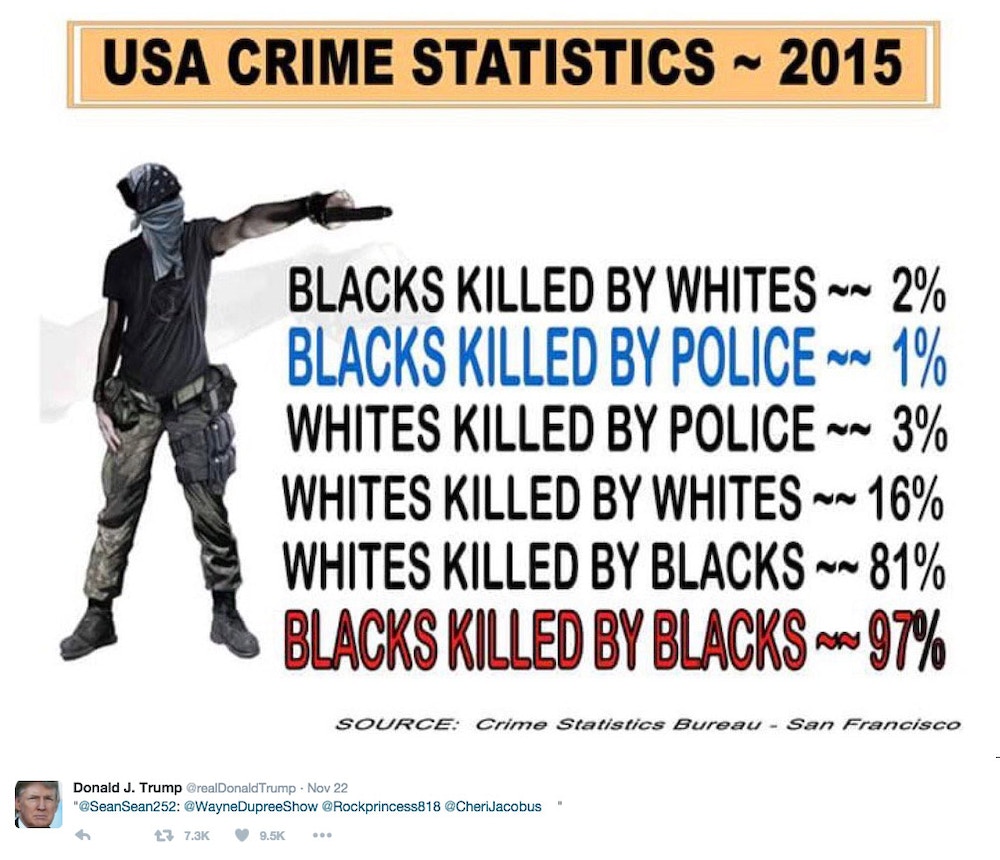 Twenty-five years ago, during the height of gruesome drug war rhetoric, the term “superpredator” was introduced to frighten Americans and provide rationale for harsher sentencing and, ultimately, the construction of the carceral state. In 1996, Hillary Clinton, now the leading Democratic candidate, called children in street organizations superpredators, adding that such youth gangsters have “no conscience, no empathy. We can talk about why they ended up that way, but first we have to bring them to heel.”

This sensationalist, sinister portrayal continues to permeate law enforcement. Darren Wilson, the white police officer who killed Michael Brown, described Brown as demon-like. “When I grabbed him,” Wilson said, “the only way I can describe it is I felt like a 5-year-old holding onto Hulk Hogan.” A law enforcement official in Cleveland thought Tamir Rice — the 12-year-old black boy killed by a white police officer one year ago this week — was a 20-year-old man. “It’s not uncommon,” Vox’s German Lopez wrote, “for police to overestimate the age and size of black boys. Various studies have found that the general public and police tend to see them as less innocent and older.”

That Trump has advanced a dehumanizing view of black Americans on the basis of plainly fraudulent evidence (sourced to a neo-Nazi Twitter user) is startling, but predictable given his torrent of hate this year. He has, after all, called for surveillance of mosques, voiced support for tracking Muslims in a national database, promised to construct a “humane” deportation force to round up undocumented immigrants (a newer version of Operation Wetback), and slandered Mexicans and other Latin Americans as criminals and rapists. Trump also appears to have lied about “personally” seeing Muslims in New Jersey cheering the attacks of September 11.

All of this comes on top of a history of racist behavior, which has gone largely ignored. In 1989, after a white woman jogger was sexually assaulted in Manhattan’s Central Park, Trump ran newspaper ads calling for the execution of five black and brown teenagers who were eventually exonerated of the crime. In 2000, according to the New York Times, Trump, in an effort to shut down a rival casino run by a Native American tribe, sponsored prejudiced ads in upstate New York newspapers:

Under a dark photograph showing hypodermic needles and drug paraphernalia, the newspaper advertisement warned in dire terms that violent criminals were coming to town. “Are these the new neighbors we want?” the paid message asked. “The St. Regis Mohawk Indian record of criminal activity is well documented.”

Just this past weekend, during a Trump rally in Alabama, the candidate’s supporters attacked a Black Lives Matter protester. The man, Mercutio Southall Jr., told an Alabama newspaper that the assailants said, “‘Go home, nigger,’ and somebody punched me.” Southall described being beaten and kicked by multiple white attendees of the rally. Video of the incident shows a group of white people on top of Southall, apparently hitting him. In the background, the vicious voice of Trump eggs them on: “Get him the hell out of here!” Later, appearing on Fox News, Trump defended the blackshirts attack on Southall, saying, “Maybe he should have been roughed up.”

Trump’s neo-fascist campaign has been facilitated, presumably for ratings, by many quarters of the American media. He appears so frequently on ABC’s This Week that the network should consider renaming the show This Week with Donald Trump. And the cable networks love him. When he’s on as a guest the questioning hardly ever dives deep into his scurrilous policy proposals; instead, the exchanges are superficial farces.

Indeed, for a long time Trump’s campaign has been treated as something humorous — political observers doubted his staying power. But despite predictions of his inevitable fall, Trump is still standing above the rest of the field. Meanwhile, there is nothing remotely funny about a leading presidential candidate spreading racist crime propaganda or advocating for rounding up innocent families for deportation.

The New Republic’s Jeet Heer tweeted that mainstream media won’t confront the present voice of white rage because they “can’t deal with Trump’s many lies for same reason they can’t deal with climate denial. Codified nonpartisanship.”

Yet, if more members of the national press don’t drop their ridiculous and dangerous attachment to so-called objectivity and — in the spirit of Ida B. Wells and Edward R. Murrow — start calling out the horror show that is Donald Trump, America will sink giggling into the sea.