Corrupt public officials like Joe Lieberman realized they can abuse their power to pressure corporations to “suffocate” private actors whom they dislike but who are breaking no laws. This new ruling makes that tactic much more difficult.

The 7th Circuit Court of Appeals in Chicago issued an excellent written ruling on Monday that has broad implications for rights of free speech and political activism in the U.S. The court ruled that Cook County Sheriff Tom Dart violated the First Amendment rights of Backpage.com, an online classified ad site, by pressuring Visa and MasterCard to prohibit payments to the site on the ground that the sheriff dislikes some of the site’s “adult” (i.e. sex) ads, which he believes promote prostitution. Writing for the court, Judge Richard Posner explained that Sheriff Dart previously attempted to prosecute Craigslist for such sex ads and failed, and thus decided to destroy Backpage using a different strategy: 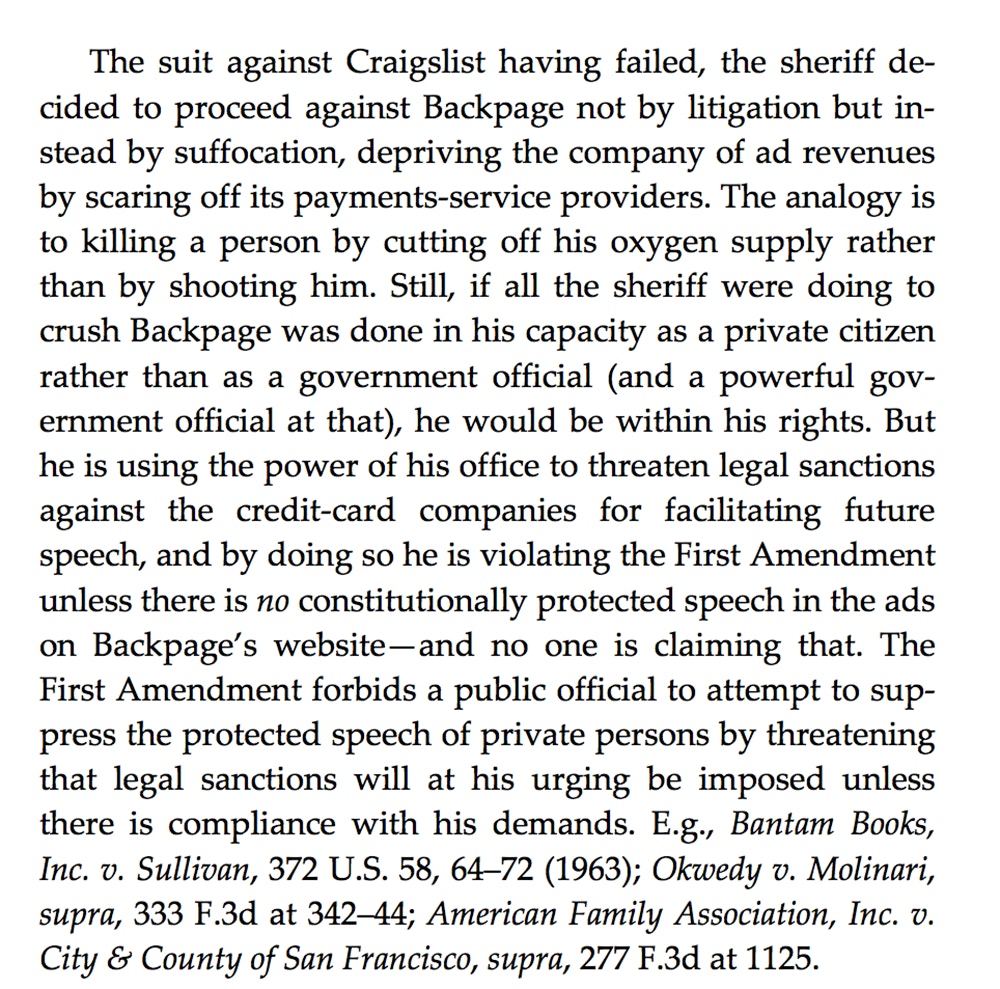 Noting the serious harm to an entity from having a public official suffocate its sources of revenue not through prosecution but extra-judicial coercion, the court ordered the sheriff immediately to cease the threatening behavior and to notify Visa and MasterCard of the ruling, explaining that “the loss of First Amendment freedoms, for even minimal periods of time, unquestionably constitutes irreparable injury.”

Beyond the positive outcome in this specific case — What kind of person would become sheriff of Chicago and then choose to spend his time worrying about adult sex ads? — the 7th Circuit’s ruling is crucial for protecting free speech rights generally. That’s because corrupt public officials have realized that they can abuse their power to pressure corporations to “suffocate” private actors whom they dislike but who are breaking no laws.

The most notorious, most dangerous case was in late 2010, when Joe Lieberman blatantly abused his power as chairman of the Senate Homeland Security Committee to implicitly threaten and coerce companies like Amazon to terminate website hosting and payment processing services to WikiLeaks, which had just published the Afghanistan and Iraq war logs and diplomatic cables. That quickly led other companies, including Visa, MasterCard, Bank of America and PayPal, to terminate credit card processing for the group, driving them close to bankruptcy. In other words, Joe Lieberman almost completely destroyed a media and political organization group he disliked not through prosecution but with nothing more than thuggish threats to the companies that serviced it.

Just as was true of the compliant companies in the WikiLeaks case, Visa and MasterCard denied that they terminated Backpage’s accounts due to government pressure, but the 7th Circuit saw right through that falsehood: “It’s true that Visa filed an affidavit stating that ‘at no point did Visa perceive Sheriff Dart to be threatening Visa.’ But what would one expect an executive of Visa to say? I am afraid of the guy?” The court added that “Visa and MasterCard were victims of government coercion aimed at shutting up or shutting down Backpage’s adult section (more likely aimed at bankrupting Backpage — lest the ads that the sheriff doesn’t like simply migrate to other sections of the website).”

As I wrote at the time of the WikiLeaks blockade, “Any attempt by political officials to start blocking Americans’ access to political content on the internet ought to provoke serious uproar and unrest.” That’s because: “no matter what you think of WikiLeaks, they have never been charged with, let alone convicted of, any crime; Lieberman literally wants to dictate — unilaterally — what you can and cannot read on the internet, to prevent Americans from accessing documents that much of the rest of the world is freely reading.”

As a result of that incident, Daniel Ellsberg, The Intercept’s co-founding editor Laura Poitras, John Cusack, Xeni Jardin, and various EFF personnel such as J.P Barlow, along with myself, created a group — Freedom of the Press Foundation — driven by concern over how dangerous these threat-based blockades can be. The initial goal was to circumvent and destroy the Lieberman-led blockade of WikiLeaks by raising money for the group ourselves (which we did in substantial amounts), but the broader goal “was to block the U.S. government from ever again being able to attack and suffocate an independent journalistic enterprise the way it did with WikiLeaks.”

This new ruling from the 7th Circuit highlights how dangerous such extra-judicial pressure campaigns can be, and makes them much more difficult by clearly ruling them to be unconstitutional. As the court explained:

In his public capacity as a sheriff of a major county (Cook County has a population of more than 5.2 million), Sheriff Dart is not permitted to issue and publicize dire threats against credit card companies that process payments made through Backpage’s website, including threats of prosecution (albeit not by him, but by other enforcement agencies that he urges to proceed against them), in an effort to throttle Backpage. See Bantam Books, Inc. v. Sullivan, supra, 372 U.S. at 67. For where would such official bullying end, were it permitted to begin?

To permit such pressure tactics against organizations disliked by political officials is to endorse “a formula for permitting unauthorized, unregulated, foolproof, lawless government coercion. The formula consists of coupling threats with denunciations of the activity that the official wants stamped out, for the target of the denunciation will be reluctant to acknowledge that he is submitting to threats but will instead ascribe his abandonment of the activity to his having discovered that it offends his moral principles.” Anyone who would approve of such tactics, said the court, is “giving official coercion a free pass because it came clothed in what in the absence of any threatening language would have been a permissible attempt at mere persuasion.”

Very few large media outlets objected to Lieberman’s tyrannical coercion campaign against WikiLeaks, even though it so obviously can threaten them as well, because of competitive and ideological dislike for the group. This new judicial ruling underscores why that campaign was so dangerous, and so clearly illegal. As the court concluded about the sheriff’s threats with reasoning perfectly applicable to Lieberman’s: “Those threats were not protected by the First Amendment; they were violations of the First Amendment. “