In investor transcripts obtained by The Intercept, gunmakers and retailers describe mass shootings — and the resulting political dynamics — as lucrative. 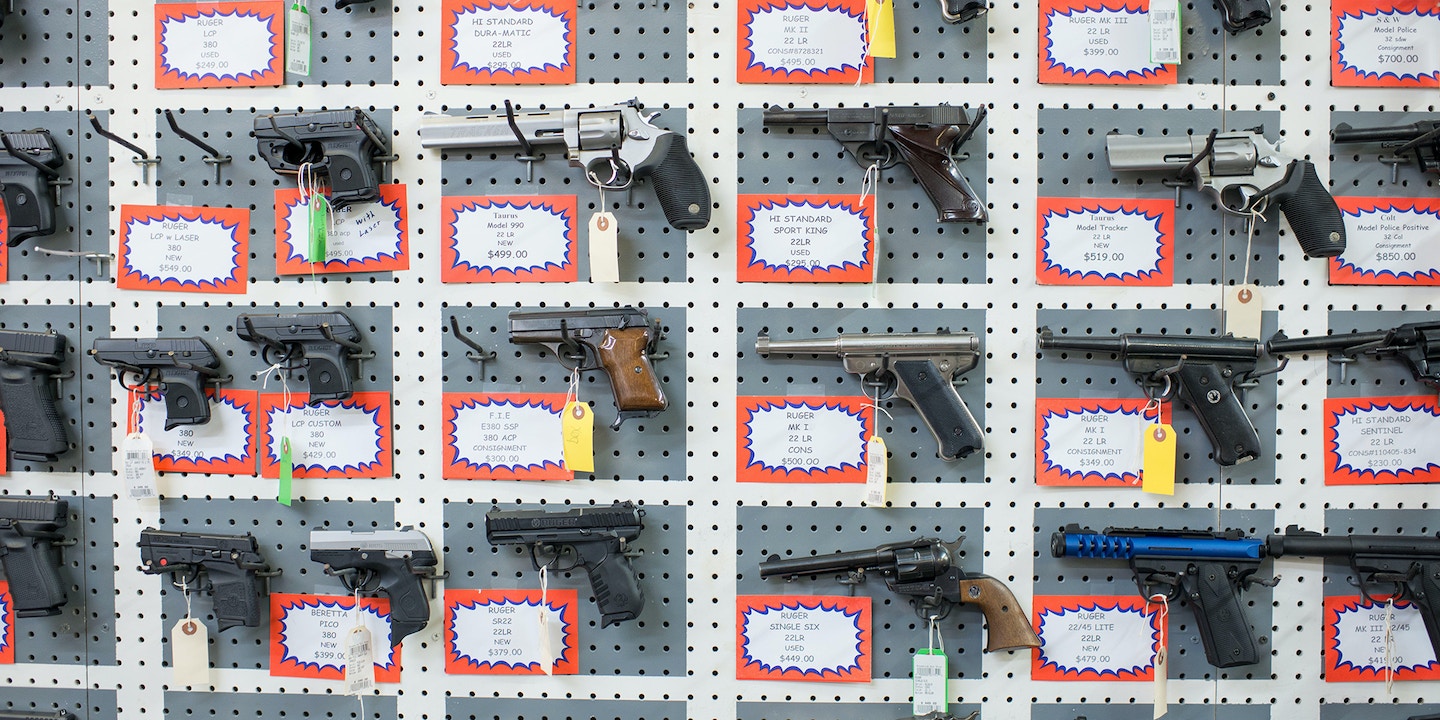 Behind closed doors, speaking with investors and Wall Street analysts, the gun industry views mass shootings as an opportunity to make lots of money.

Ordinary people are despairing about the frequency of tragic events like the murderous rampage in San Bernardino on Wednesday, or the Planned Parenthood massacre last week. And the cycle of mass killing, media frenzy, and political stalemate starts anew each time.

But meanwhile, gun sales continue to break records, a fact that has not gone ignored by financial analysts.

Here’s how it works. Following a mass shooting, there is talk of gun control, which the National Rifle Association and other gun advocates attack as an assault on the Second Amendment. Notably, gun and ammunition manufacturers often donate, either directly or as a portion of each sale, to the NRA. The fear of losing gun rights leads to panic buying, which brings greater profits to gun retailers, gun companies and their investors.

“The gun business was very much accelerated based on what happened after the election and then the tragedy that happened at Sandy Hook,” Ed Stack, the chief executive of Dick’s Sporting Goods, a leading gun and ammunition retailer, said in September 2014 at the Goldman Sachs Global Retailing Conference. Stack noted that the industry saw “panic buying” when customers “thought there were going to be some very meaningful changes in our gun” laws. The new sales “didn’t bring hunters in” but rather “brought shooters into the industry,” he added.

Last year, Tommy Millner, the chief executive of Cabela’s, a retailer that sells guns, boasted at an investor conference in Nebraska that his company made a “conscious decision” to stock additional weapons merchandise before the 2012 election, hoping Obama’s reelection would result in increased sales. After the election, the Newtown mass shooting happened, and “the business went vertical … I meant it just went crazy,” Millner said, according to a transcript of the event. Describing the “tailwinds of profitability,” Millner noted Cabela’s “didn’t blink as others did to stop selling AR-15 platform guns,” and so his company “got a lot of new customers.” The AR-15 is a high-powered assault rifle based on the military’s M-16 model but without the full automatic capacity,

Steven Miller, the chief executive of Big 5 Sporting Goods, another gun retailer, was asked by investor analysts in 2013 to describe the state of the market during a conference call that year. The “real surge” in firearm sales, Miller said, “took place following the tragedy in Sandy Hook.”

Smith & Wesson chief executive James Debney, speaking to the Roth Capital Partners conference in 2013, explained that “the tragedy in Newtown and the legislative landscape” resulted in sales that were “significantly up.” The “fear and uncertainty that there might be increased gun control,” Debney said, “drove many new people to buy firearms for the first time.

“You can see after a tragedy, there’s also a lot of buying,” Jeff Buchanan, the chief financial officer of Smith & Wesson, told investors at the RBC Capital Markets conference in September of this year. Buchanan noted that the political landscape of 2016 is uncertain, but that fear of gun control could be on the horizon.

Michael Fifer, the chief executive of Sturm Ruger, one of the largest gunmakers in America, discussed the role of politics in gun sales during a conference call with investors in 2013. “If you look back at historical patterns back in late ’08, early ’09, you saw a huge spike in accessory sales which then tapered off, and then we saw it again with the really tragic events at Sandy Hook that started again as soon as the politicians started talking about restricting legal gun use,” Fifer said.

Market analysts, including consultants who often hold executives accountable to investors, have been keen to ask gun companies about how they are able to respond to surging sales following mass shootings.

Gautam Khanna, an analyst with Cowen & Co., an investment banking and market research firm, interviewed Mark DeYoung, then the chief executive of ATK, an ammunition manufacturer, at the Cowen Aerospace conference in 2013. Khanna asked DeYoung if he would make pricing decisions based in part by the “Newtown shooting tragedy.”

DeYoung responded that “obviously we are all shocked” by “what happened in Newtown and what happened in Aurora, Colorado, and what happened in Tucson, Arizona, with Gabby Giffords.” But, he added, the company will continue to “respond to market pressures,” including increases in demand. On a separate conference call that year, DeYoung noted that certain “spikes” in demand have driven sales.

James Holmes killed 12 people and injured more than 70 others after opening fire in an Aurora, Colorado, movie theater in 2012.

In 2011, Jim Barrett, a financial analyst, asked Ruger’s Fifer during a call with investors if the “recent shooting incident in Tucson” — referring to the shooting that year of Rep. Gabby Giffords — “has stirred gun owners and prospective gun owners to go visit the stores?”

Bob Sales, another analyst, asked Fifer how his company was preparing for future gun sales, given that “a combination of the election in 2012 and the Sandy Hook incident … spurred a massive binge of gun buying.”

On a conference call with investors, Millner, the chief executive of Cabela’s, fielded a question about the Aurora mass shooting from an analyst with Imperial Capital, who asked him if the incident had “any impact on your business.” Millner responded, “I would say that the trends that you read about in the press, we are experiencing at least thus far since the incident.”

The business rhetoric around mass shootings “doesn’t surprise me at all,” says Ladd Everitt, the director of communications of the Coalition to Stop Gun Violence. Everitt noted that the National Rifle Association, which is funded by gun manufacturers, often uses similar language following mass shootings.

“This just shows the guys in the suits understand this and are utterly cynical about it.”

Top photo: Guns are on display at Roseburg Gun Shop in Roseburg, Oregon, on October 2, 2015.