GOP Candidates Compete on “Toughness” by Pledging to Kill Children

It started with a student asking about Donald Trump’s plan to intentionally kill the families of suspected terrorists. 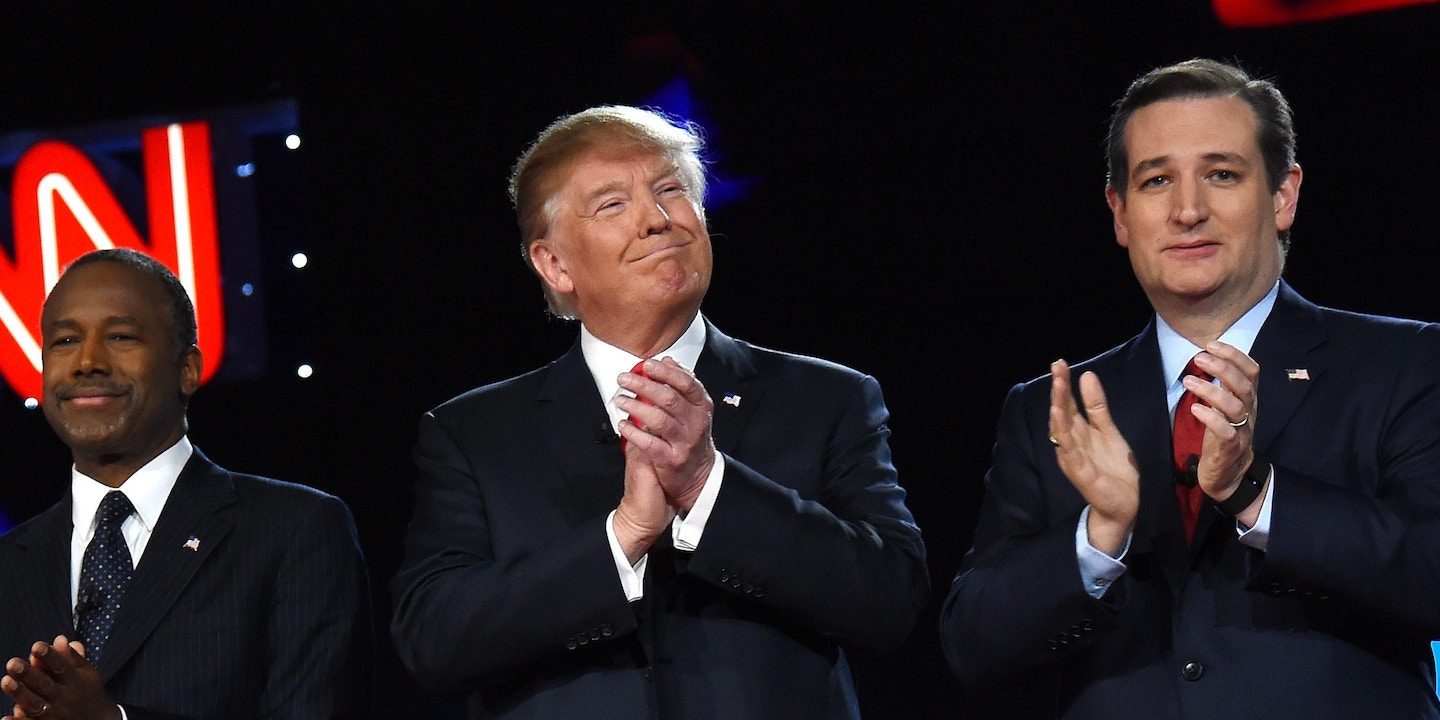 Republican presidential candidates spent much of Wednesday night’s debate trying to out-“tough” each other.

It started with a question submitted by a Georgia Tech student asking how Donald Trump’s plan to intentionally kill the families of suspected terrorists would morally differentiate the United States from ISIS.

Trump replied that the United States has “to be much tougher. We have to be much stronger than we’ve been. … I would be very, very firm with families. Frankly, that will make people think because they may not care much about their lives, but they do care, believe it or not, about their families’ lives.”

When Jeb Bush replied that Trump’s plan showed a “lack of seriousness,” Trump countered that Bush was a “nice person” but “we need tough people. We need toughness.”

Right-wing radio host Hugh Hewitt probed Ben Carson, telling him that we’re talking about “ruthless things tonight — carpet bombing, toughness, war.” He wanted to know whether Carson could “order airstrikes that would kill innocent children not by the scores, but the hundreds and the thousands? Could you wage war as a commander in chief?”

Carson decided to draw an analogy to his surgical work, saying that “you should see the eyes of some of those children when I say to them we’re going to have to open your head up and take out this tumor. They’re not happy about it, believe me. … But later on, they love me.” He said that by “the same token, you have to be able to look at the big picture and understand that it’s actually merciful if you go ahead and finish the job.” It appeared lost on Carson that, unlike his surgical patients, children obliterated by aerial bombing do not come back to consciousness after the procedure.

“Ruthless is not necessarily the word I would use, but tough, resolute, understanding what the problems are, and understanding that the job of the president of the United States is to protect the people of this country and to do what it is necessary in order to get it done,” concluded Carson about his strategy, drawing applause from the audience.

For Ted Cruz, toughness was about the number of bombs dropped. He cited the 1,100 air attacks a day in the Persian Gulf war against Iraq, which had the fourth-largest army in the world at the time, and wondered aloud why the same level of military force was not being used against several thousand ISIS fighters holed up in dense population centers like Raqqa in Syria.

Bush, Carson, and other candidates made pledges to “rebuild” our military and increase our national weapons budget, as if the United States was not the world’s largest military spender by quite a  staggering margin.

What was missing from these exchanges were substantive follow-ups by the moderators. If the moderators had been serious about holding the debaters accountable, they could have asked just how tough it is for the world’s most powerful country to so fear a small band of terrorists with no navy, air force, or WMD that it would abandon its values and spend enormous amounts of resources on unnecessary weapons programs.