During Deborah Feinstein’s tenure there, the Federal Trade Commission has largely abandoned its attempts to block mergers. 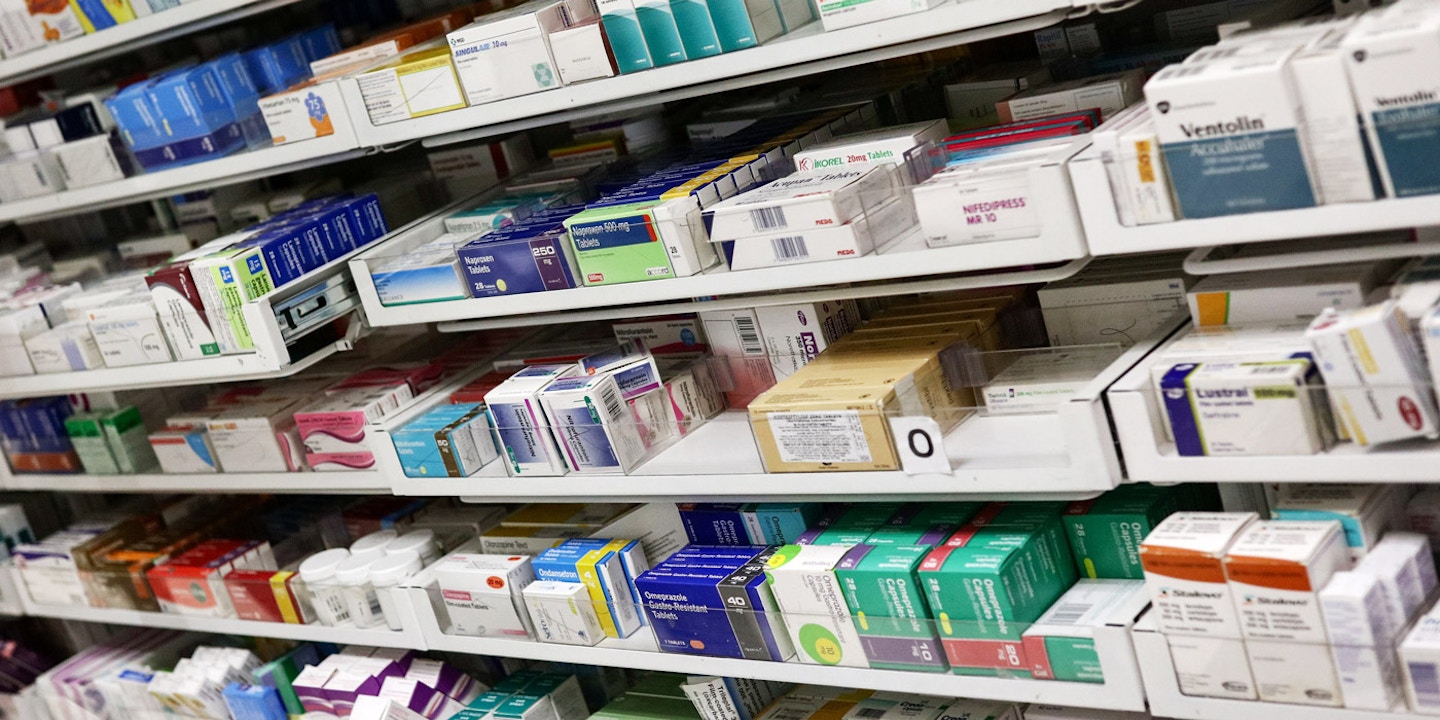 One of the biggest policy debates in America today concerns the unparalleled rise in prescription drug costs. Enormous pharmaceutical industry profit margins; tales of companies like Turing, Valeant, and Gilead Sciences jacking up the price of life-saving medicines; and a spate of industry mergers (the latest being a $150 billion deal between Pfizer and Allergan, designed mostly to lower their tax rates) have lawmakers and presidential candidates scrambling for answers.

But one point has been lost among the various proposals: The U.S. has had antitrust laws on the books for over 100 years to reduce the power of monopolies and restrain consumer costs. They could come in handy in situations like these.

Bernie Sanders recognized this when he urged the Obama administration to block the Pfizer-Allergan merger. Hillary Clinton has promised to “stop corporate concentration” in the pharmaceutical industry.

The problem is that the federal agency responsible for antitrust oversight of drug companies — the Federal Trade Commission — has a terrible track record of supporting the public interest. And the reason why can be seen in the career trajectory of one woman: Deborah Feinstein, director of the FTC’s Bureau of Competition, the agency’s main enforcement entity. During Feinstein’s tenure, the FTC has largely abandoned its attempts to block mergers, instead favoring consent agreements that have a history of failing to achieve their goals.

Feinstein has gone back and forth through the so-called revolving door. From 1989 to 1991, she worked at the FTC as an assistant director in the Bureau of Competition. In 1995, she moved to high-powered corporate law firm Arnold & Porter, becoming a partner and the head of the firm’s antitrust practice. Feinstein “specialized in representing clients before the FTC and Department of Justice,” including General Electric, NBC Universal, Unilever, and Pepsi.

On its website, Arnold & Porter brags about its robust practice in helping pharmaceutical and medical device companies “respond to complex regulatory and compliance changes.”

In 2013, Feinstein returned to the FTC to run the Bureau of Competition, while reportedly speaking fondly about how her private practice experience informed her decisions.

“The elite D.C. antitrust bar is a small, chummy circle whose members spend most, if not all of their time representing corporations,” said Jeff Hauser, who runs the Revolving Door Project at the Center for Effective Government. “Law firms eagerly market their attorneys’ government experience, signaling to clients that their team possesses relationships with current regulators.”

Two federal agencies handle antitrust enforcement: the FTC’s Bureau of Competition and the Department of Justice’s Antitrust Division. They informally split up industries to cover, and the FTC has responsibility over several health care-related industries, including pharmaceuticals, medical devices, and consumer health products. Those happen to be among the fastest-consolidating industries in America.

Earlier this month, the FTC let Dyax’s $6 billion acquisition by Shire Pharmaceuticals go through, choosing to take no action before the antitrust waiting period lapsed. Even Wall Street expected a challenge; when it didn’t transpire, Dyax’s stock jumped 13 percent.

It was the latest in a rush of mergers and acquisitions in the industry. There were $221 billion in pharma mergers in just the first half of 2015, even more than the $162 billion for the entire previous year.

And consider what these giant companies do: Valeant Pharmaceuticals has acquired, licensed, or agreed to co-promote over 140 drugs since 2008, and as part of its strategy it buys the rights to rival drugs and increases the prices overnight by as much as 525 percent.

Horizon, another drugmaker, sells a medication called Duexis, which costs $1,500 a month, even though its component drugs cost no more than $40 a month. In 2013, Horizon acquired Deuxis’ main competitor, called Vimovo, and raised the price 600 percent.

Questcor performed the same trick by buying the main rival to its immune-deficiency drug. The FTC never challenged any of these purchase agreements.

Efforts to reach Feinstein or get a comment from the FTC were unsuccessful. But Feinstein laid out her philosophy in a speech early in her tenure. “In my view … consent orders are as effective in maintaining or restoring competition as going to court,” she said.

She argued that settlements — where the FTC allows the merger to go forward, but with certain conditions — produce faster, smarter resolutions using fewer resources, and are “a remedy that is as good as or better than what could be achieved from litigation.”

This open preference for settlements over admittedly riskier legal challenges comes directly from a career in private practice, where settlements are the end goal. But well-designed studies and recent history show that settlements don’t work.

For example, some settlements result in “conduct remedies” — like adding firewalls between parts of a business, ensuring access by competitors, or other arrangements to preserve competition. But retrospective research of conduct remedies by Northeastern University law professor John Kwoka found them uniquely ineffective in preventing harm to consumers.

Prices rose over double the normal post-merger rate when a conduct remedy was imposed. “I’ve been fairly critical of the inclination to go that route,” Kwoka said. Feinstein has explicitly dismissed Kwoka’s research.

Feinstein has also led an effort to use divestitures to try to rebuild competition. In this case, a merger can go through provided that a certain percentage of the business is sold off to create a new competitor.

The FTC forced Hertz, as a condition for its merger with Dollar Thrifty, to spin off its Advantage Rent a Car brand. Just four months after the deal, Advantage filed for bankruptcy.

The same thing happened to the Haggen grocery chain. As part of the Albertsons merger with Safeway, the FTC required Albertsons to sell 168 stores to competitors. Haggen bought most of them, but lasted only nine months before bankruptcy, unable to bulk up from running 18 stores to 164. Ironically, while liquidating its holdings in the bankruptcy, Haggen sold 33 Oregon stores back to Albertsons, at a fraction of their sales price.

“I’m increasingly critical of divestitures to create a competitor,” said Kwoka. “It seems to be a stretch, and clearly the FTC has gotten their fingers burned.”

Feinstein defended both divestiture disasters after the fact. She insisted that the FTC did its due diligence before Albertsons sold off stores to Haggen. “We’re aware of the concerns about whether Haggen was prepared to take over these stores, but we can’t comment at this time,” Feinstein told a local California business journal.

She has also altered the FTC’s antitrust decision-making process to give herself more power. The FTC’s five commissioners ultimately decide whether to challenge a merger, after seeking recommendations from the Bureau of Competition. But Feinstein makes recommendations to the commission separately from her staff. This leads to situations where the staff wants to be more aggressive, but Feinstein prefers a settlement. Given her stature as an authority figure, Feinstein often wins out.

Feinstein reportedly overruled her staff on the Reynolds/Lorillard tobacco company merger, which the FTC cleared after a divestiture of some brands to a third party. The trade publication Capitol Forum has also cited mergers between Nielsen and Arbitron, as well as Zillow and Trulia, where Feinstein disagreed with staff and her position won out.

The FTC did block a merger between food-service companies Sysco and U.S. Foods, but Feinstein reportedly sought a settlement deal there first.

The commission has been somewhat more aggressive in challenging a spate of recent hospital mergers (at least 95 hospitals have merged each year from 2012 to 2014), but Feinstein had to recuse herself from the most recent challenged merger, of two hospitals in West Virginia.

The FTC has even taken sides with mega-conglomerates like CVS and Wal-Mart against independent pharmacies. The huge pharmacy companies sign deals with pharmacy benefit managers, or PBMs — the middlemen who administer prescription drug programs — to access “preferred pharmacy networks.” Such networks give consumers lower prices if they use certain pharmacies — and the pharmacies give the PBMs a kickback in exchange for use of the network.

States have tried to break this scheme by letting independent pharmacies form their own networks. But the FTC has routinely warned against such proposals, saying they would “impair the ability of prescription drug plans to negotiate the best prices with pharmacies.”

This furthers consolidation, both among pharmacies and PBMs. After CVS Health merged with Omnicare and OptumRx combined with its rival Catamaran — both without FTC resistance — the top three PBMs now handle 75 percent of all U.S. prescriptions.

Intervening on behalf of monopolists is the opposite of the FTC’s ostensible mission. But that’s what comes of installing people in high-level positions just because of their litigation expertise — rather than their support for strong enforcement.

“Senior antitrust positions should more often come from backgrounds other than the corporate bar,” said Hauser, of the Revolving Door Project.

He suggests selecting more candidates from academia or from the career regulatory staff.

“People with those types of backgrounds all tend to have much greater distance from, and fewer entanglements with, the corporations whose behavior they are tasked with regulating.”