Fearmongering Around Muslim Immigrants Echoes Anti-Asian Hysteria of Past

Both groups were linked to a major attack on the U.S. and then labeled as hostile to American values. Will Muslims face similar discriminatory laws? 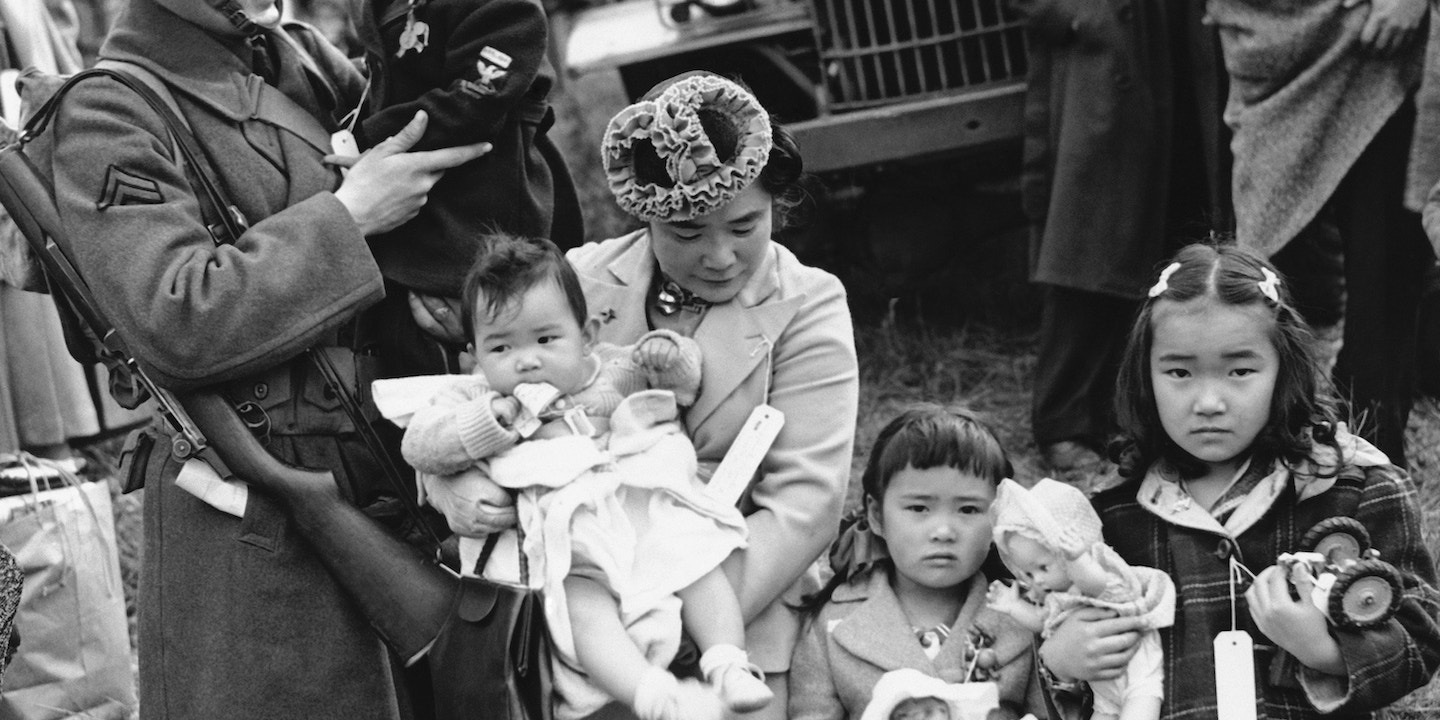 ON MAY 6, 1882, U.S. President Chester Arthur signed into law the Chinese Exclusion Act, the first in a series of discriminatory legal measures aimed at curbing immigration from Asia. Speaking at the time of its passage, California Sen. John F. Miller, a leading proponent of the law, declared that the Chinese were “an inferior sort of men” and that “Chinese civilization in its pure essence appears as a rival to American civilization. It is a product of a people alien in every characteristic to our people, and it has never yet produced and can never evolve any form of government other than an imperial despotism. Free government is incompatible with it, and both cannot exist together.”

There are echoes of Miller’s demagoguery, and of contemporaneous warnings about the supposed “Yellow Peril” posed by East Asians, in the warnings politicians and prominent media figures issue today about allegedly unassimilable immigrants and refugees from Muslim countries.

“The type of rhetoric we’re seeing today about Muslims is both very similar and also slightly different from that which was used to describe Asian immigrants in the past,” said University of Minnesota professor Erika Lee. A specialist in immigration studies, Lee is also author of the 2015 book The Making of Asian America, which chronicles in part the anti-Asian sentiment that new arrivals often had to contend with. “Like Muslims, Asian immigrants were characterized as a slowly creeping civilizational threat to the security and integrity of the United States, but today, with Muslims, there is also the additional allegation that they have a violent intent to overthrow the existing order.”

In recent months, leading Republican presidential candidate Donald Trump has said that all Muslims should be barred from entering the U.S., even for temporary travel, while “establishment” candidates such as Jeb Bush have also made discriminatory proposals, such as forcing refugees from Syria to “prove” that they are in fact Christians before granting them asylum. Louisiana Gov. Bobby Jindal has publicly described the immigration of Muslims to the United States as an “invasion,” while Ben Carson recently accused Muslims attending the State of the Union address of being part of a “civilizational jihad” intended to change the United States from a “Judeo-Christian foundation to a Muslim foundation.”

There has also been the insistence by some, like Florida Sen. Marco Rubio, that the United States is not just engaged in a conflict with an array of terrorist groups but instead a full-blown “clash of civilizations.” Such statements ironically echo the Manichaean narrative of extremist groups like the Islamic State, while further adding to the environment of fear and hostility toward ordinary Muslims in the United States.

The fearmongering around Muslims entering the U.S. resembles not only the earlier panic over East Asian immigrants but around Jewish refugees, as well, as my colleague Lee Fang has written.

Polls have shown that proposed anti-Muslim legal measures enjoy significant popularity in the United States, not only among Republicans but with many Democrats as well. The December passage of bill HR-158, a modification to the Visa Waiver Program that restricts the travel rights of people whose “national origin” is from Iran, Sudan, Iraq, or Syria, has been characterized by some as the first successful attempt to begin to turn these popular sentiments into law. Further measures that would effectively halt refugee applications from Iraq and Syria are also currently under debate.

For many years, Asian-Americans were similarly targeted by politicians and media figures for opprobrium, eventually giving rise to popular support for harsh legislation targeting their community. Following the passage of the 1882 Exclusion Act, further measures like the Asiatic Barred Zone Act of 1917 contributed to even greater restrictions on travel and immigration to the United States from many Asian countries.

Japanese-Americans and Muslims in particular share another touchstone experience: a major attack on U.S. soil to which their community was ascribed collective blame. Following the 1941 bombing of Pearl Harbor and the entry of the United States into World War II, Japanese-Americans were subjected to an unprecedented degree of hostility and scrutiny, particularly by mainstream media figures. “After Pearl Harbor, Japanese-Americans not only saw their travel restricted, but they came to be viewed by many Americans as an advance guard for a hostile power,” Lee said. “There were allegations throughout the media that they represented a fifth column in American society, and that ultimately their allegiance would lie with the Japanese Emperor instead of the United States.” 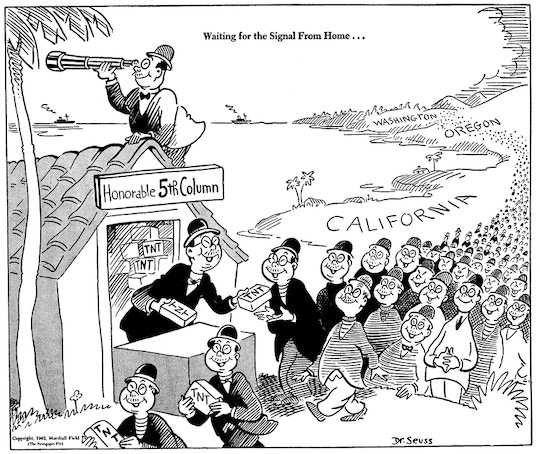 Nationally syndicated newspaper pundits played a key role in the campaign for punitive measures against Japanese-Americans, including internment. In the Washington Post, popular syndicated columnist Westbrook Pegler wrote in favor of mass internment of Japanese-Americans on the West Coast, declaring, “To hell with habeas corpus until the danger is over.” Some were even more frank in their racist attitudes; syndicated columnist Henry Mclemore wrote at the time that “If making one million innocent Japanese uncomfortable would prevent one scheming Japanese from costing the life of one American boy, then let the million innocents suffer.”

Despite government intelligence reports into the Japanese-American community that concluded there was “no Japanese problem,” and that indeed many were “pathetically eager” to show their loyalty to the United States, on February 19, 1942, President Franklin Roosevelt signed Executive Order 9066, the authorization for mass internment. Right up to the time the order was signed, the media campaign against the Japanese community continued, with the Washington Post publishing a now-infamous editorial by columnist Walter Lippmann describing Japanese-Americans as “The Fifth Column on the Coast.”

Decades later, a congressional study commissioned to look into the internment order said that the decision had been undertaken not for legitimate security reasons, but rather as a result of ”racial prejudice, war hysteria and failure of political leadership.” Indeed, a key part of this wartime hysteria was the role media demagogues played in engendering an atmosphere of distrust and hate toward Japanese-Americans, despite government determinations that they were broadly innocent of the dual-loyalty charges leveled against them.

Given the depressingly negative sentiment that exists today in much of the popular discourse against Muslims, many see parallels with the shameful period of anti-Asian bigotry in the United States that culminated in racist policies like the exclusion laws and mass detention. This week, a group of 4,600 educators from across the country published an open letter in the New York Times speaking out against anti-Muslim bigotry. The letter cited the history of racist policies and anti-immigrant policies in the United States, specifically mentioning Japanese internment, while warning that “we could head down a similarly dark path today.”

“There have been similarly xenophobic sentiments in this country in the past, including about Asian and Jewish immigrants, but what is remarkable today is the increasing intensity of it as it focuses upon Muslims as a group,” said Melanie Nezer, vice president of policy and advocacy at HIAS (formerly known as the Hebrew Immigrant Aid Society). “If the goal of this kind of anti-refugee, anti-immigrant, and anti-Muslim rhetoric is to achieve security, it certainly doesn’t accomplish that. What it does is inflame fears, and it has the potential to incite violence against people living peacefully in this country.”

Correction: An earlier version of this story gave an incorrect year for the bombing of Pearl Harbor.