Clinton’s previous comments raise questions about both the motive and the sincerity of her recent assault on Democratic presidential rival Bernie Sanders. Two doctors who met privately with Hillary Clinton during the 1993 health reform debate say she agreed that single-payer health care would be good for Americans. Their recollections raise questions about both the motive and the sincerity of Clinton’s recent assault on Democratic presidential rival Bernie Sanders for supporting such a system.

Until Clinton’s pivot, the accepted Democratic view was that single-payer was the best solution in theory, but that it was politically unrealistic. Clinton’s new critiques, by contrast, are an attempt to make Sanders’ single-payer proposals sound costly and destructive.

Shortly after President Bill Clinton took office, Hillary Clinton was tasked to assemble a health care reform proposal.  As a part of that process, she met with advocates of different approaches, including two physicians who advocated for a single-payer system, in which the government, rather than private insurers, pays for all health care costs. 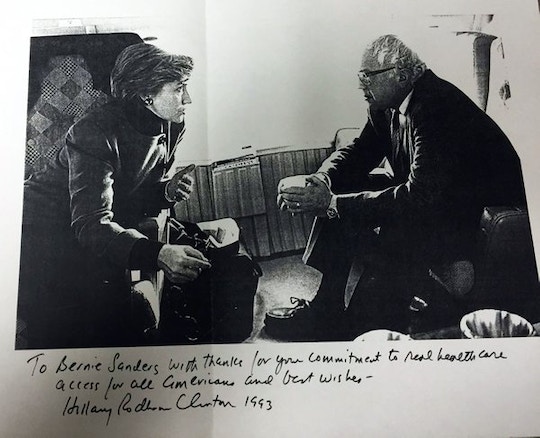 “I’m not sure who arranged the meeting to be honest — I think there was pressure to have the meeting from Sanders [then a member of Congress] but also from [civil rights leader] Jesse Jackson,” David Himmelstein, who today is a lecturer at Harvard Medical School, told The Intercept. “What I know is we got a call from Ira Magaziner’s office. Ira Magaziner was Hillary’s right-hand man [in the health reform debate].” Magaziner wanted the single-payer advocates to have their say with the first lady.

Himmelstein described an intimate meeting with Clinton that also included fellow single-payer advocate Steffie Woolhandler and only “one or two aides” in the White House executive office building. The meeting went on for several hours, with Clinton asking both doctors a flurry of questions.

“We had very substantial time to make that case and it was a very friendly conversation. It was not an antagonistic conversation in any way,” said Himmelstein. “Towards the end of the session after we had gone back and forth with Mrs. Clinton about the details and the advantages and some of the questions she had about it, she said, ‘You make a very convincing case that single-payer would be a good reform, but is there any force on the face of the earth that would counter the money the insurance industry would spend to defeat it?’ ”

Himmelstein said he replied that the presidential bully pulpit would be the counterweight — an argument that did not end up convincing Clinton of the political feasibility.

“She was definitely implying that — that she would endorse it but that it was unrealistic,” added Woolhandler.

But both Himmelstein and Woolhandler did note that Clinton was clearly impressed by the data presented to her, and said she used it to decry the administrative costs of private health insurance at a speech at the Institute of Medicine a few months later.

In that speech, as documented in the book The Unique Voice of Hillary Clinton: A Portrait in Her Own Words, Clinton called for the need to “achieve savings and eliminate inefficiencies.” In a speech a month later at Marshall University on November 4, 1993, she went further. “If we had done what Harry Truman wanted us to do back then, we would be a lot better off, both financially and in our ability to provide every American with health care,” she said. Truman proposed a single-payer universal health care program financed by taxes on all working Americans.

Since then, of course, the Affordable Care Act passed, shepherded by President Barack Obama, who shifted from his initial advocacy for a single-payer plan to saying he would favor one if we were “starting from scratch,” but did not believe the program was feasible in the circumstances.

Clinton’s campaign is now accusing Sanders of wanting to “dismantle Obamacare” as well as Medicare, Medicaid, and the Children’s Health Insurance Program. During an appearance on The Rachel Maddow Show, the candidate claimed the Sanders single-payer plan would “end all the kinds of health care we know.”

These claims drew a “mostly false” from Politifact; the Sanders program wouldn’t eliminate these programs so much as expand and consolidate them. Just as the merger of two companies does not abolish or dismantle either company, consolidating Medicaid and Medicare while expanding them to all Americans would not eliminate them.

Another thing that has changed since 1993 is that the health care industry has lavished both Clintons with money. That includes $2.8 million in fees from paid speeches Hillary Clinton gave since stepping down from the State Department in 2013. Her husband continues to give paid speeches, including one to the health insurance lobby this past summer.

The Intercept asked both Himmelstein and Woolhandler what they thought about Clinton’s newfound opposition to the substance of a single-payer program.

“It’s disingenuous,” replied Woolhandler. “She ought to know better. In fact, I think she does know better. What this is is a political ploy that she thinks she can score some points from, apparently.”

The Sanders campaign responded to her attacks on his health policy this week by releasing a photo from a meeting between Sanders and Clinton from around the same time she met with the two doctors. Underneath the photograph, Clinton wrote: “To Bernie Sanders with thanks for your commitment to real healthcare access for all Americans and best wishes — Hillary Rodham Clinton, 1993.”