The script used by U.K. and U.S. elites to demonize both Jeremy Corbyn and Bernie Sanders is remarkably similar.

The British political and media establishment incrementally lost its collective mind over the election of Jeremy Corbyn as leader of the country’s Labour Party, and its unraveling and implosion show no signs of receding yet. Bernie Sanders is nowhere near as radical as Corbyn; they are not even in the same universe. But, especially on economic issues, Sanders is a more fundamental, systemic critic than the oligarchical power centers are willing to tolerate, and his rejection of corporate dominance over politics, and corporate support for his campaigns, is particularly menacing. He is thus regarded as America’s version of a far-left extremist, threatening establishment power. 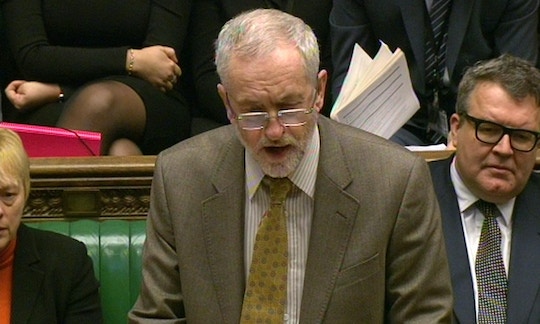 For those who observed the unfolding of the British reaction to Corbyn’s victory, it’s been fascinating to watch the D.C./Democratic establishment’s reaction to Sanders’ emergence replicate that, reading from the same script. I personally think Clinton’s nomination is extremely likely, but evidence of a growing Sanders movement is unmistakable. Because of the broader trends driving it, this is clearly unsettling to establishment Democrats — as it should be.

A poll last week found that Sanders has a large lead with millennial voters, including young women; as Rolling Stone put it: “Young female voters support Bernie Sanders by an expansive margin.” The New York Times yesterday trumpeted that, in New Hampshire, Sanders “has jumped out to a 27 percentage point lead,” which is “stunning by New Hampshire standards.” The Wall Street Journal yesterday, in an editorial titled “Taking Sanders Seriously,” declared it is “no longer impossible to imagine the 74-year-old socialist as the Democratic nominee.”

Just as was true for Corbyn, there is a direct correlation between the strength of Sanders and the intensity of the bitter and ugly attacks unleashed at him by the D.C. and Democratic political and media establishment. There were, roughly speaking, seven stages to this establishment revolt in the U.K. against Corbyn, and the U.S. reaction to Sanders is closely following the same script:

STAGE 1: Polite condescension toward what is perceived to be harmless (we think it’s really wonderful that your views are being aired).

STAGE 2: Light, casual mockery as the self-belief among supporters grows (no, dears, a left-wing extremist will not win, but it’s nice to see you excited).

STAGE 3: Self-pity and angry etiquette lectures directed at supporters upon realization that they are not performing their duty of meek surrender, flavored with heavy doses of concern trolling (nobody but nobody is as rude and gauche online to journalists as these crusaders, and it’s unfortunately hurting their candidate’s cause!). STAGE 4: Smear the candidate and his supporters with innuendos of sexism and racism by falsely claiming only white men support them (you like this candidate because he’s white and male like you, not because of ideology or policy or contempt for the party establishment’s corporatist, pro-war approach).

STAGE 5: Brazen invocation of right-wing attacks to marginalize and demonize, as polls prove the candidate is a credible threat (he’s weak on terrorism, will surrender to ISIS, has crazy associations, and is a clone of Mao and Stalin).

STAGE 6: Issuance of grave and hysterical warnings about the pending apocalypse if the establishment candidate is rejected, as the possibility of losing becomes imminent (you are destined for decades, perhaps even generations, of powerlessness if you disobey our decrees about who to select).

STAGE 7: Full-scale and unrestrained meltdown, panic, lashing-out, threats, recriminations, self-important foot-stomping, overt union with the Right, complete fury (I can no longer in good conscience support this party of misfits, terrorist-lovers, communists, and heathens).

Britain is well into Stage 7, and may even invent a whole new level (anonymous British military officials expressly threatened a “mutiny” if Corbyn were democratically elected as prime minister). The Democratic media and political establishment has been in the heart of Stage 5 for weeks and is now entering Stage 6. The arrival of Stage 7 is guaranteed if Sanders wins Iowa. It’s both expected and legitimate in elections for the campaigns to harshly criticize one another. There’s nothing wrong with that; we should all want contrasts drawn, and it’s hardly surprising that this will be done with aggression and acrimony. People go to extremes to acquire power: That’s just human nature. But that doesn’t mean one can’t find meaning in the specific attacks that are chosen, nor does it mean that the attacks invoked are immune from critique (the crass, cynical exploitation of gender issues by Clinton supporters to imply Sanders support is grounded in sexism was particularly slimy and dishonest given that the same left-wing factions that support Sanders spent months literally pleading with Elizabeth Warren to challenge Clinton, to say nothing of the large numbers of female Sanders supporters whose existence was nullified by those attacks).

People in both parties, and across the political spectrum, are disgusted by the bipartisan D.C. establishment. It’s hardly mysterious why large numbers of adults in the U.S. want to find an alternative to a candidate like Clinton who is drowning both politically and personally in Wall Street money, who seems unable to find a war she dislikes, and whose only political conviction seems to be that anything is justifiably said or done to secure her empowerment — just as it was hardly a mystery why adults in the U.K. were desperate to find an alternative to the craven, war-loving, left-hating Blairites who have enormous amounts of blood stained indelibly on their hands.

But the nature of “establishments” is that they cling desperately to power, and will attack anyone who defies or challenges that power with unrestrained fervor. That’s what we saw in the U.K. with the emergence of Corbyn, and what we’re seeing now with the threat posed by Sanders. It’s not surprising that the attacks in both cases are similar — the dynamic of establishment prerogative is the same — but it’s nonetheless striking how identical is the script used in both cases.