British and American spies collected live video from Israeli drones as part of a classified program code-named “Anarchist,” which operated from a mountaintop listening post on the Mediterranean island of Cyprus. Among the files provided by former National Security Agency contractor Edward Snowden are a series of “snapshots” from Israeli drone feeds, which offer a rare glimpse at the closely guarded secret of Israel’s drone fleet.

The images presented here show several different types of unmanned planes, including what appear to be rare public images of Israeli drones carrying missiles. Although Israeli drone strikes have been widely reported, officially the government refuses to confirm the use of armed drones. (Neither NSA, GCHQ, nor the Israel Defense Forces provided comment for this story.)

These and other images from Anarchist will be on view as part of Intercept co-founder Laura Poitras’ solo exhibition at the Whitney Museum of American Art in New York. The exhibition, Astro Noise, opens February 5. On January 28, 2010, GCHQ analysts on Cyprus captured six minutes of video from what appears to be a Heron TP, a giant drone manufactured by the state-owned Israel Aerospace Industries (IAI).

In this snapshot still from the video, a large missile-shaped object is clearly visible on the left side. A GCHQ report mentions “regular collects of Heron TP carrying weapons” in 2009. A very similar image, likely from the same intercept, is named “Heron_TP_Payload.” The video is shot from the right-hand rear vertical stabilizer of the TP (this open-source video offers a similar viewpoint).

Drone experts consulted by The Intercept confirmed that the image shows a Heron TP.

“It certainly looks like the missile-shaped objects are weapons,” said Bill Sweetman, an editor at Aviation Week. “The bodies appear to have cruciform tail fins. The distortion makes it a bit hard to tell size, but — assuming they are bombs — these are definitely less than 500-pound class.” He added that because the Heron-TP is an Israeli strategic intelligence system, the objects could be decoys, used to “force a response from Iran’s air defenses, while the UAV orbits and hoovers up signals.” 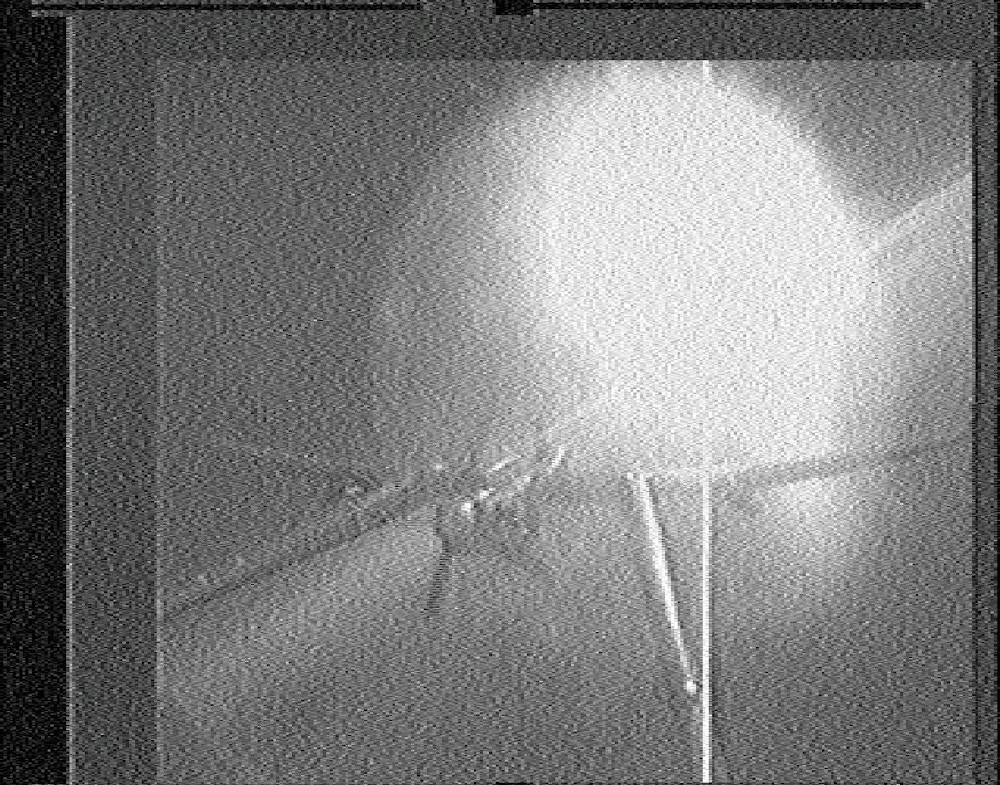 This is another image taken from a Heron TP, intercepted on February 9, 2010. The Heron TP or Eitan (meaning “strong” or “steadfast”) has an 85-foot wingspan, can carry a 1-ton load, and can stay aloft for up to 36 hours. It has been described in the press as “the drone that can reach Iran.”

The image is blurred, but objects appear to be mounted under the wings. The GCHQ file notes that the signal was “too poor to process” further. Here is an IAI Heron, intercepted on April 26, 2009. “This is the standard IAI Heron, which can be recognized by the shape of the satellite communications radome,” said Sweetman.

Former U.S. drone pilots interviewed for this story told The Intercept that this view, showing the body of the aircraft, was a way of checking for ice or other problems.

This particular Heron seems to be modified to carry arms or other wing-mounted equipment such as sensors, but given the quality of the image, it is not entirely clear. This is an IAI Searcher MK III, according to Sweetman. The Searcher was developed in the 1980s, but is still used by the Israel Defense Forces and by a number of other countries. This image was intercepted early on the morning of January 7, 2010. Based on the display markings, like the dial in the upper right-hand corner, it appears to be from a drone made by the company Aeronautics. (This video from the manufacturer shows a similar view.) The image indicates that this model was equipped with Forward-Looking Infrared (FLIR) camera.

Unlike other Anarchist snapshots identified by The Intercept, the video angles downward and appears to show a view of buildings below.

A GCHQ document from 2010 reported that analysts on Cyprus had collected signals from Aeronautics’ Aerostar Tactical, a medium-sized drone that has been used by the Israeli military since 2000, and sold to countries from Poland to Thailand. This blurred image was recorded on August 25, 2009, the same day that news agencies reported that the IDF bombed a smuggler tunnel in Gaza, killing three Palestinians inside. According to an Anarchist document, the signal was “too poor to process” further. This image is from a March 2008 internal NSA newsletter celebrating the successful capture of video from the cockpit of an Israeli F-16 during unrest in the Gaza Strip. The newsletter describes a “14-second-long video” captured on January 3, 2008, which “showed an ‘unbroken line’ running through the targeting display, indicating that the target being tracked was on the ground.” On that same day, Israeli airstrikes and shelling from tanks reportedly killed nine people in Gaza.

The F-16 display was captured by operators of satellite surveillance systems at Menwith Hill, an important NSA site in England, working “closely with a GCHQ site in Cyprus for tip-offs.” This image comes from a PowerPoint presentation and shows a video still from an Iranian-made Ababil III drone flying out of western Syria. The signal was captured by Anarchist analysts and recorded on March 11, 2012.

“MHS [Menwith Hill Station] reacted and made a collect on both the video and telemetry signals and were able to derive a couple of minutes of clear video,” a GCHQ report notes. This was “a bit of a result” for the Anarchist team, not least because the captured video resulted in “presidential interest” — presumably a reference to U.S. President Barack Obama — “in further samples of the Regime launching attacks upon the general populous [sic].”

The image offers rare evidence of Iranian drones operated by Syrian President Bashar al-Assad’s military, although their use has been reported based on testimony from unnamed officials and on videos filmed by eyewitnesses on the ground.

A 2009 GCHQ report notes that “Iran also has an effective UAV industry and their technology has been exported to a number of terrorist organisations.” Two intercepts at different times on July 20, 2009, show how the quality of the images Anarchist grabbed could vary. Analysts would have to reprocess the feeds and clean up images to get an idea of what they were looking at.

A training manual for Anarchist explains how analysts decoded video feeds that were encrypted. Publicly available, open-source tools — such as AntiSky and ImageMagick — were used to decrypt and further process the video frames.

“The computing power needed to descramble the images in near real time is considerable,” the manual notes, but “it is still possible to descramble individual frames to determine the image content without too much effort.” Anarchist also tracked the location of drones. This map shows movement data collected on June 24, 2009, from an Israeli drone of an unspecified type. Several locations are recorded, including one north of Nablus, a city in the West Bank, and another further southwest in the West Bank. 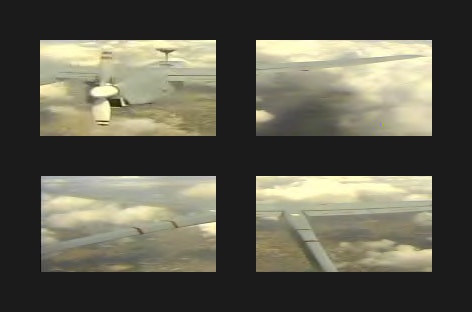 A 2010 GCHQ report includes stills from a video captured by Anarchist that “revealed multiple video streams from different cameras.” The report explains that “this is potentially a significant upgrade to the normal analogue video we see, this new system adds the capability to see a number of video feeds simultaneously.” It concludes that “we currently have no collection system capable of processing this signal due to the high data rate and complexity of the underlying data,” and suggests expanding capabilities in order to capture such videos.

The recording, from April 12, 2010, also contained the drone’s location data, near the Palestinian town of Attil. This is another ground-track showing a map of location data from an Israeli drone, intercepted on June 25, 2009. This two-second recording seems to have been made while the drone was stationary. The map has three locations marked: Tel Nof and Palmachim, both Israeli air force bases home to drone squadrons, and Ein Shemer, which houses an anti-ballistic missile battery, and where the IDF conducts drone-training flights. Another snapshot shows what appears to be the landing gear of a drone. Sweetman, of Aviation Week, suggested that it was an Aerostar Tactical UAV. This snapshot from a 14-second-long video dated July 13, 2009, was recorded at 4:51 in the morning, and shows what appears to be an Aerostar Tactical UAV flying at low altitude. 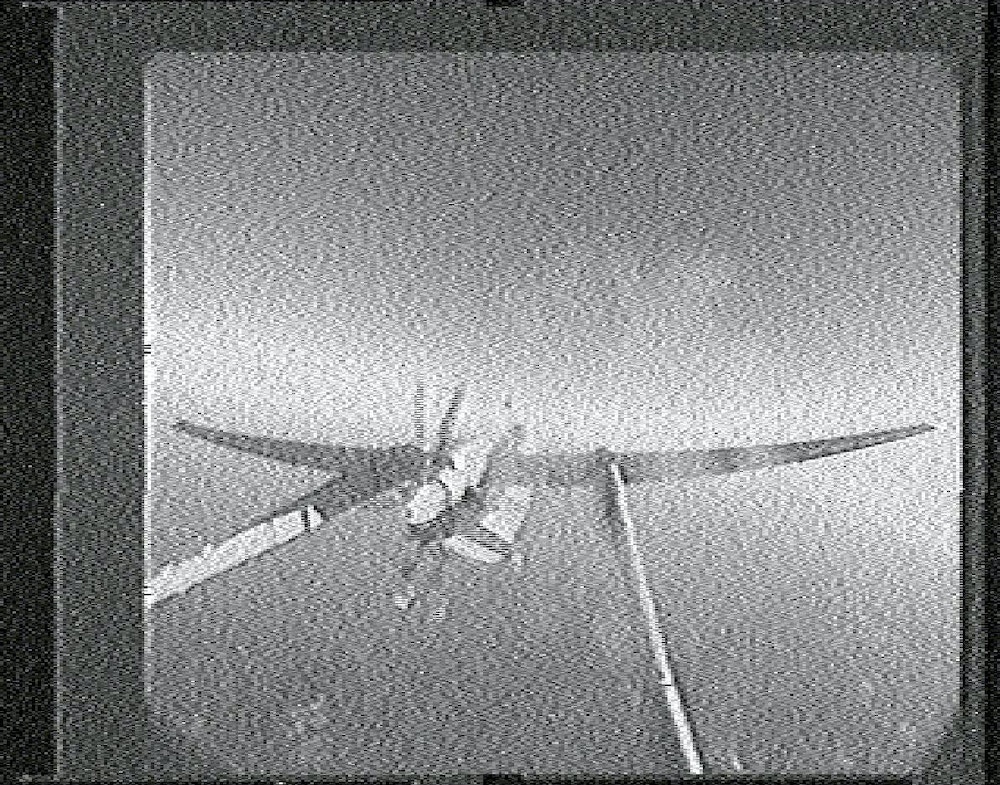 This is another shot of a Heron TP, taken almost six minutes into a recording captured on June 9, 2010. There is no visible missile mount or payload, but the drone appears to be carrying a modification, which Sweetman called a “ventral pannier.” Publicly available photos show similar storage compartments under the main hull.