These Quakers Are Asking Tougher Questions Than Many in the Press

A Quaker group has trained hundreds of activists to stalk the candidates in early primary states and ask them tough questions about social justice and other issues. 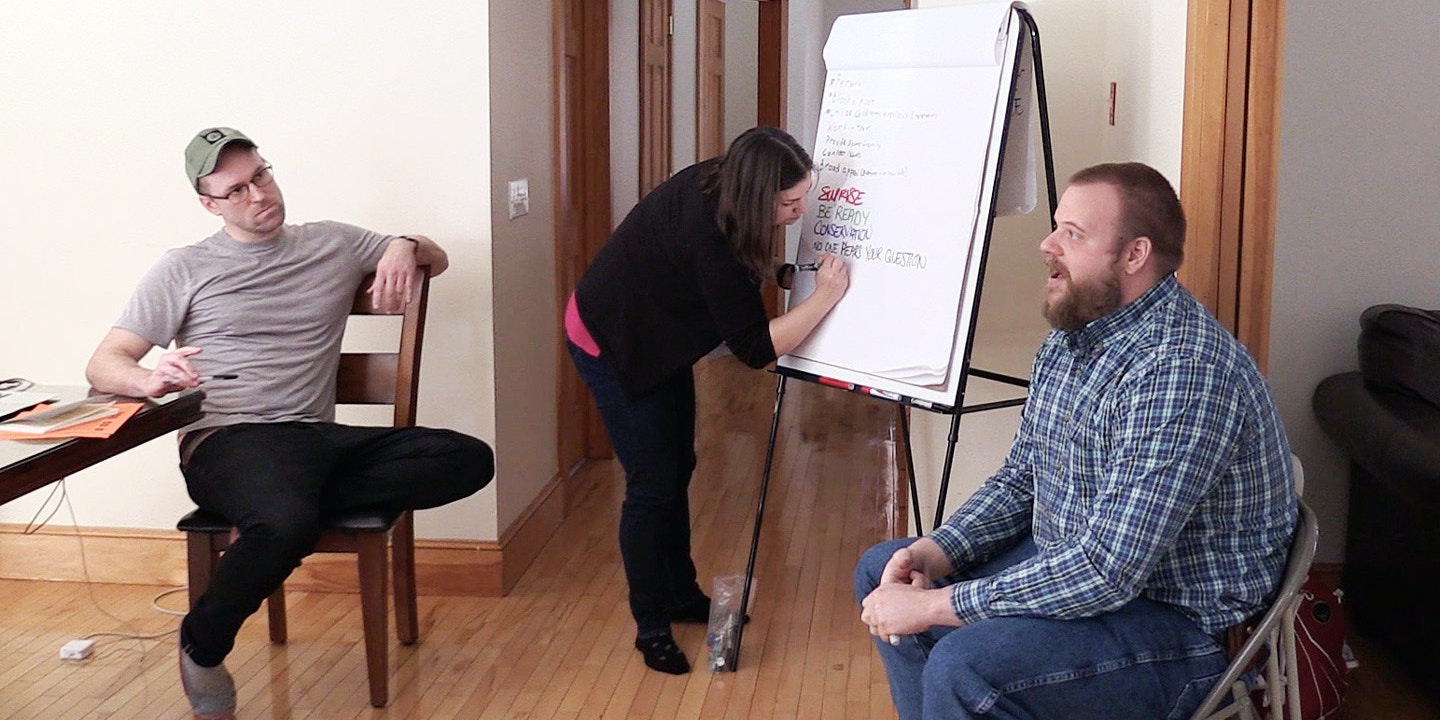 Presidential candidates these days are accustomed to mainstream reporters quizzing them on process and politics, with a typical media scrum filled with questions about the latest polls, repeated demands for a response to the most recent attack from rival campaigns, and sometimes even vapid inquiries about workout routines or favorite foods.

So a group of Quakers has been trying to fill the substance vacuum — by training hundreds of activists to stalk the candidates in early primary states and ask them tough questions on issues ranging from immigrant detention to nuclear weapons to the role of money in politics.

The American Friends Service Committee, a Quaker organization that works to promote social justice, trained over 1,100 activists in Iowa and New Hampshire. Students, veterans, climate activists, and others learned how to formulate the right question, approach a candidate at an event, and record the interaction so it can be shared through social media.

They’ve asked over 250 questions so far, many of them available on their website as “Bird Dog Reports.”

“It might be at a cafe like this,” explains Arnie Alpert, co-director of the effort in New Hampshire, as we sit together in a booth at the Red Arrow Diner in Manchester. “We find out a candidate will be there and we have a volunteer and he says, ‘I’ll go and have coffee.’”

Hillary Clinton, Jeb Bush, Marco Rubio, John Kasich, Bernie Sanders, Carly Fiorina, Ted Cruz, and Chris Christie have all been confronted by staff and volunteers associated with the project. Several of the questions have gone viral online, with some making news: Iraq war veteran Will Hopkins, a volunteer with the AFSC group and the director of NH Peace Action, was able to ask Clinton a question about the influence of military contractors at a town hall that was broadcast on NBC’s Today Show.

For all the talk about this election revolving around national security and government spending, the AFSC group is among a select few dedicated to asking candidates about President Barack Obama’s planned $1 trillion nuclear arms program, bloated military programs such as the Pentagon’s F-35, and how to diminish the influence of lobbying by military contractors. Activists trained with the group have also asked about fracking, ethanol subsidies, and other issues they say are clouded by the pervasive role of money in politics.

Sometimes the benefit is getting the candidate on record. Other times, Alpert says, there is an educational component, because the candidates are forced to think about policy matters that are all too often ignored on the trail.

He recalls the very first campaign event in the state hosted by Lindsey Graham. Every reporter asked horserace questions or encouraged Graham to say something about Hillary Clinton. Alpert says he used the opportunity to talk about private prisons and immigration, specifically federal laws concerning the so called detention quota.

“He looked at me and said, ‘Wow, I thought I knew everything about immigration but I didn’t know about the detention quota!'” Alpert’s eyes light up as he tells the story, adding that Graham seemed to appreciate the exchange of ideas.

“The voters by and large want to talk about the issues. So what we’re doing through this training is helping make it possible for voters who want to talk about issues that matter to get into these forums and actually do that,” Alpert says.

Alpert traces the strategy back to anti-nuclear weapons campaigns organized by the AFSC in the 1980s, when volunteers used to work to educate candidates about nonproliferation. In 2004, the effort gained steam as AFSC was able to encourage Howard Dean to start talking about the dangers of free trade policies by constantly showing up at his campaign events to talk about the issue. In 2008, volunteers peppered candidates of both parties with questions about foreign policy, with John McCain memorably responding to a question about how many years U.S. forces should remain in Iraq by saying “maybe 100.”

To get a better sense of how the process works, I traveled to New Ipswich, where a group of military veterans was in the process of being trained by the AFSC to talk to candidates. Down a rural road dotted mostly with Rand Paul and Bernie Sanders signs, the activists gathered in a small house rented by the organizers.

The veterans lined up along the living room wall as organizers Will Hopkins and Olivia Zink pretended to be presidential candidates, shaking hands and dispensing the usual platitudes. The challenge for the veterans was to use the grip-and-grin as an opportunity to ask tough questions.

As they practiced, the organizers would stop intermittently and query the room for critiques. After a quick exercise, they chatted about best practices: Make eye contact, remember to introduce yourself as a veteran. The former soldiers in the room nodded and took notes.

Though they were coached on delivery, the veterans came up with their own questions. Iraq Veterans Against the War’s Jose Vasquez, who drove up from the Bronx to attend the training, wanted to talk to candidates about undocumented immigrants serving in the military who face the threat of deportation. Julio Torres, an Iraq war veteran who attends a seminary in New York, wanted to speak about the growth of the military budget at the expense of social programs.

The next day, at the Nashua Radisson Hotel, the veterans showed up early to attend a town hall where a number of the Republican candidates were scheduled to speak.

After Carly Fiorina gave her stump speech, she said she would take a few questions. Jason Hurd, a veteran who participated in the training, shot his hand up and was called on first.

“As an Army combat medic — and I spent a year in Baghdad, policing Iraqis with sometimes brutal tactics — now I see police here at home using the same tactics, with the same weapons, and the same equipment that I used, on black communities,” he said. “What would your presidency do to end the militarization of police and stop cops from killing everyday Americans?”

“Thank you for your service, first of all,” Fiorina responded. Then she ignored the question, choosing instead to tear into Hillary Clinton and Barack Obama for withdrawing troops too quickly from Iraq.

Another opportunity came up with Rand Paul. Kelly Dougherty, who served as a military police office during the Iraq War, told the Kentucky senator about the excesses of private military contractors, and asked what he would do to restrain the political influence of such companies. Paul responded directly, saying any company that receives taxpayer money should be limited “in what they can do to lobby.”

I stood on the sidelines, mostly watching the interactions as they happened. As Fiorina left the stage, she was mobbed by reporters, all of whom were demanding that she respond to a rumor that morning that billionaire Michael Bloomberg might make an independent run for the presidency. She declined to answer the first question, turning to another reporter, who asked the same question again. Flustered, Fiorina ended the impromptu press availability and left.

I spoke to some of the veterans after the event and they said they felt empowered by finally getting up close and personal with the candidates.

And all that when there were so many important things to be asking about.

“I’m concerned with the way a lot of these candidates are talking about Muslims,” said Perry O’Brien, an Afghanistan War veteran who helped out in the training, and who has done his own share of questioning the candidates on the trail. “It’s just absolutely egregious and horribly disrespectful that some of these folks running for office would try to rally their base by trying to demonize an entire faith.”

“I mean, I think its troubling, especially what several of them mentioned, how religious they were,” said Torres, the Iraq War veteran. He added that the event in Nashua was his first time attending such a partisan event. “Being in the seminary, it threw me for a loop,” he said, shaking his head. “I figured they would talk more about helping the poor, the needy — versus trying to spread war like Rome.”

Top photo: Perry O’Brien, Will Hopkins, and Olivia Zink at a training in New Ipswich.