Apple attorney Marc Zwillinger listed the requests in a newly unsealed response to an order from a magistrate judge in a Brooklyn federal court.

Apple has objected to or otherwise challenged at least 12 government requests to help extract data from locked iPhones since September, bolstering its argument that its current battle about a terrorist’s phone is not as unique as the Justice Department has maintained.

The other requests are listed in a newly unsealed court brief filed by Apple attorney Marc Zwillinger in response to an order from a magistrate judge in a Brooklyn federal court. That case involves a government request to search an Apple iPhone 5s for evidence about a suspect’s possession or sale of methamphetamine.

Apple has refused to extract data from the phone, even though it could (because the phone was running on an older operating system), arguing in court that it was “being forced to become an agent of law enforcement.”

Several of the newly disclosed government requests to Apple are like the one at issue in the Brooklyn case — calling on the company to use its existing capabilities to extract data like contacts, photos and calls from locked iPhones running on operating systems iOS7 and older. But a few requests involve phones with more extensive encryption, which Apple cannot break. To comply in those cases, Apple would presumably be ordered to do something very much like what it’s being asked to do in the San Bernardino case: design new software to let the government circumvent the device’s security protocols and unlock the phone.

The Brooklyn magistrate judge, James Orenstein, appears sympathetic to Apple’s position. He asked Apple for more details “regarding other requests it has received during the pendency of this matter that are of a similar nature to the one at issue in the instant case.”

In his response, Zwillinger included a chart of nine different requests Apple has received under the All Writs Act while the Brooklyn case was ongoing. The act dates back to 1789, and directs companies to assist the government in order to carry out legal requests such as search warrants, as long as doing so doesn’t cause undue burden. That goes well beyond ordinary warrants for information that Apple can easily access. 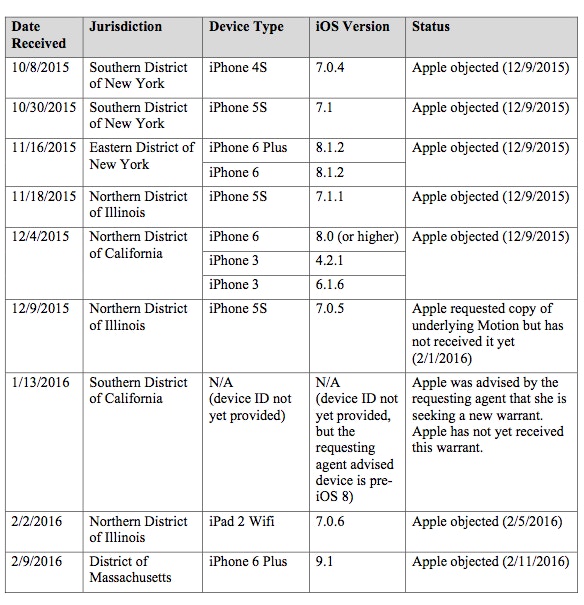 A list of other All Writs Act orders Apple has received, showing the jurisdiction in which the request was made, the type of device at issue, the version of iOS used on the device, and the status. The list does not include the San Bernardino order, or the request beforebefore Magistrate Judge James Orenstein in the Eastern District of New York.

Not included in the chart, according to a footnote, are additional All Writs Act requests filed by the government shortly preceding the pending case in Brooklyn — two in the Southern District of Ohio and one in the Northern District of Illinois. Apple objected to those orders and hasn’t yet received a response.

The requests listed on the chart were filed in New York, Illinois, California, Massachusetts, and Ohio, in multiple different districts.

The device models ranged from an iPhone 3 to an iPhone 6 Plus, as well as an iPad 2 with Wifi capabilities — and one phone whose model hasn’t been identified yet.

They were running operating systems ranging from iOS4.2 to iOS9.1 —  iOS8 being the level at which Apple says it cannot retrieve the data on the phone because it is encrypted, and only the user can unlock it.

Apple objected to all but two of the requests — one where it has not yet received the government’s underlying motion, and another where the agent who filed the request says “she is seeking a new warrant” — which hasn’t surfaced yet.

“Apple has not agreed to perform any services on the devices to which those requests are directed,” Zwillinger wrote.

FBI Director James Comey wrote in a letter on Sunday that “the San Bernardino litigation isn’t about trying to set a precedent or send any kind of message. It is about the victims and justice.”

But the other government requests — especially in cases where Apple would have to develop new software to undermine the security on the device — add to the already considerable evidence that the government is not only trying to get into one terrorist’s phone.

In October, Orenstein directed Apple to challenge the government’s request — asking to hear more on “whether the assistance the government seeks is technically feasible and, if so, whether compliance with the proposed order would be unduly burdensome.” In his memorandum, he explored the many ways Apple might not actually be legally required to help the government under the All Writs Act.

“The question becomes,” Orenstein wrote, “whether the government seeks to fill in a statutory gap that Congress has failed to consider, or instead seeks to have the court give it authority that Congress chose not to confer.”

Read the rest of the brief: