A court in Bahrain sentenced a prominent opposition leader to one year in jail on Wednesday for the crime of “inciting hatred” — hatred, that is, of the Persian Gulf monarchy’s repressive government. A court in Bahrain sentenced a prominent opposition leader to one year in jail on Wednesday for the crime of “inciting hatred” — hatred, that is, of the Persian Gulf monarchy’s repressive government.

Writing on Instagram, Bahrain’s public prosecutor expressed disappointment that the veteran political activist, Ibrahim Sharif, was not also convicted of plotting to overthrow the island nation’s government by calling for democracy and full civil rights for all citizens in a speech last year.

There is little dispute about exactly what Sharif said, since his speech was recorded on video and posted online with English subtitles by Bahrain’s main liberal party, the National Democratic Action Society, which he once led. It is not clear if the court screened the video, but Sharif’s remarks, at a memorial for a 16-year-old protester who was shot and killed by the security forces in 2012, will strike anyone from a free society as nothing more than a calm, determined call for the country’s disenfranchised majority to persevere in their struggle for democracy and justice.

Sharif began his remarks, last July 10, by explaining that although he was in prison in 2012 — along with a dozen other leaders of Bahrain’s political opposition jailed the year before as the monarchy tried to suppress a movement for democracy inspired by the Arab Spring — he had heard about the killing of a young protester, Hussam al-Haddad. After his release, just a few weeks before the memorial, Sharif said that he had been horrified to see disturbing, graphic images of young Hussam’s body, “punctured by bullets.”

He went on to quote statements from Victor Hugo, Spinoza, and José Rizal, a hero of resistance to Spanish colonization in the Philippines, on the need for steadfastness in any struggle for freedom. Rizal, he noted, had explained that “the tyranny of some is made possible only by the cowardice of others.”

“In our case,” Sharif said, “there is no going back to building a wall of fear. The government is only strong when we are cowards and is weak when we are courageous.”

Later in the speech, he said that he understood that people were tired of protesting after more than four years of repression, but “let nobody fool you and say that the fire was extinguished, the revolution died, the people’s determination has softened.”

“The coal under the ashes,” he added, “needs two or three strong gusts of wind to reignite.”

He finished by suggesting that the government had attempted to create the impression of reform without making any real changes, invoking an old saying about the folly of “covering a cheap item with valuable wrapping.”

“The government is cheap, bankrupt and a failure. Whether you put it in the most beautiful box or wrap it with the prettiest cover, you’re wasting your money, because this government cannot be beautified.” 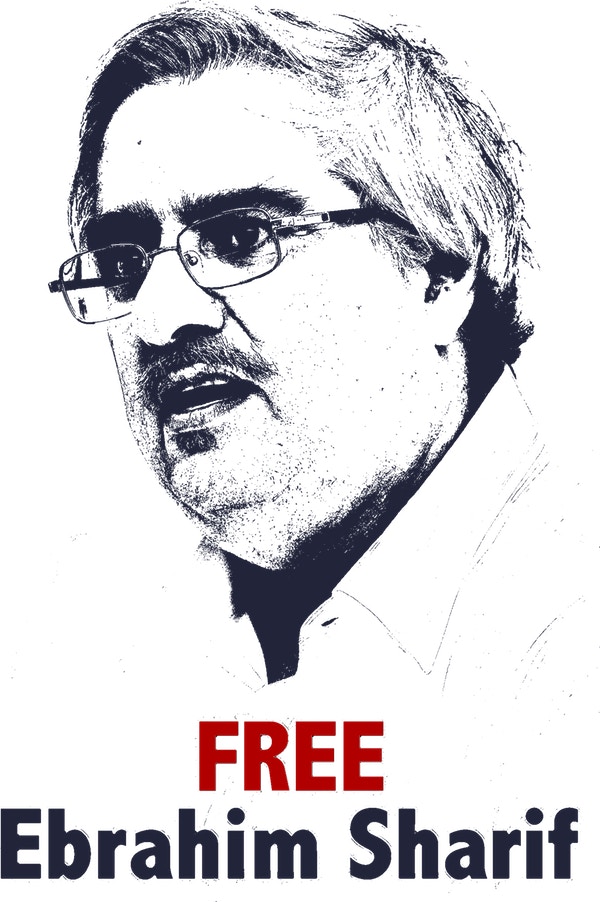 A poster calling for the release of Ibrahim Sharif, one of Bahrain’s jailed opposition leaders.

One night after his speech, Sharif was dragged from his bed at 2:30 in the morning, arrested and sent back to prison, where he has been ever since.

While Article 165 of Bahrain’s penal code does indeed mandate a prison term for anyone who “incites others to develop hatred or hostility towards the system of government,” the jailing of a secular activist for a political speech seems to expose the monarchy’s repeated claims that it is on the path to reform as nothing more than spin.

As the Bahrain Center for Human Rights noted on Tuesday, the State Department “cited Sharif’s early release in June 2015 by royal pardon, after serving four years and three months, as a key example of Bahrain’s ‘meaningful progress’ on human rights reform that led to the partial resumption of arms sales that same month.”

After Sharif was re-arrested, less than two weeks later, the State expressed its “concern,” but made no mention of any concrete action against the gulf kingdom where the United States Navy’s Fifth Fleet is based.

Like the royal family that rules Bahrain, Sharif is a member of the country’s Sunni Muslim minority.

When pro-democracy protesters filled the streets of Bahrain in early 2011, the veteran campaigner against government corruption warned journalists not to fall for the monarchy’s attempts to discredit the peaceful movement as a violent sectarian uprising.

The religion of the protesters “does not matter,” Sharif said in a conversation with a reporter caught on video on February 17 of that year.

A good cause is a good cause — whether it’s a Shia, it’s a Christian, it’s a Jew, it’s a Hindu or whoever has the cause; people should support the cause. The fact of the matter that we have more Shiites supporting the cause does not make the cause any weaker. People with more grievances in any place in the world will take to the streets first; others will follow. I don’t think we should insult the movement because there are a lot of Shiites and very few Sunnis, it does not matter. I am a Sunni, my wife is a Shiite, we are a society where Shia and Sunni live together. The government divided the society. And therefore somebody has to start something. If it is going to be the Shiites from the villages who start, so be it, the people will follow.

One day after this video was recorded, several protesters, marching with their hands in the air and chanting “Peaceful! Peaceful!” were gunned down by members of Bahrain’s security forces.