Hillary Clinton is relying on support from black voters in South Carolina, but at a fundraiser in Charleston, she found herself confronted by a young black activist demanding an apology. 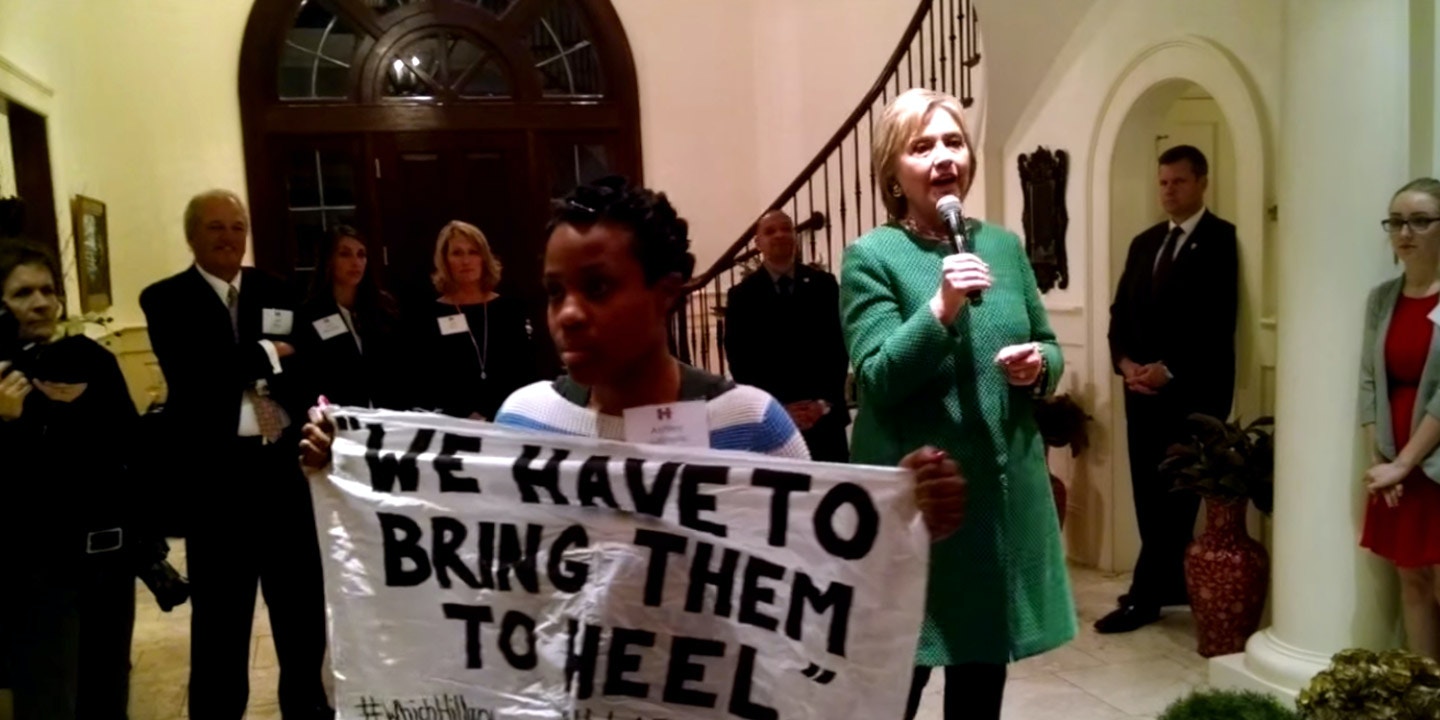 Hillary Clinton is relying on support from black voters to help her carry South Carolina in the Democratic primary on Saturday, but at a fundraiser in Charleston on Wednesday night, she found herself confronted by a young black activist demanding an apology.

As video of the protest shows, the activist, Ashley Williams, interrupted Clinton’s remarks about criminal justice at the private event by unfurling a banner with the phrase “we have to bring them to heel.” Those words — language that has been taken as an offensive and racist characterization of young black teens as unruly animals — were used by the former first lady at a campaign rally for Bill Clinton in New Hampshire in January 1996.

Williams demanded that Clinton apologize for those words and for using racially charged language suggesting that the nation was threatened by a generation of young “superpredators.”

After Clinton took note of the banner, Williams said, “I’m not a superpredator, Hillary Clinton. Will you apologize to black people for mass incarceration?”

As the small, mainly white crowd of donors hissed, and a man tried to get the activist to put her banner away, Clinton responded by referring to a speech she gave last April in which she deplored the killing of unarmed black men and boys by police officers and called for an “end to the era of mass incarceration.” Williams, however, pressed her demand for an apology, saying, “You called black people predators.”

As Williams was led away, Clinton claimed that this was the first time she had been asked to explain her 1996 comments, which have been widely shared online in recent months. “You know what, nobody’s ever asked me before, you’re the first person that’s ever asked me, and I’m happy to address it,” she said.

But just seconds later, as the activist was bundled out the door, Clinton brushed off the exchange, saying, “OK, back to the issues.”

Video of the exchange, posted on a YouTube channel called #NotASuperpredator and featured on the Huffington Post, was viewed more than 100,000 times by Thursday afternoon, prompting the Clinton campaign to tell reporters that her words had been taken out of context, and referred not to at-risk, black teens, but to drug gangs exploiting kids.

C-Span video of her speech on January 28, 1996, reveals that Clinton was indeed talking about the need to tackle gangs, but it is not hard to understand why activists like Williams might agree with Michelle Alexander, the author of The New Jim Crow: Mass Incarceration in the Age of Colorblindness, who called her language “racially coded rhetoric” in a widely read article in The Nation.

Touting the success of the 1994 crime bill signed into law by her husband, Clinton said in the speech that in addition to putting more police officers on the streets:

We also have to have an organized effort against gangs, just as in a previous generation we had an organized effort against the mob. We need to take these people on, they are often connected to big drug cartels, they are not just gangs of kids anymore. They are often the kinds of kids who are called superpredators. No conscience. No empathy. We can talk about why they ended up that way but first we have to bring them to heel. And the president has asked the FBI to launch a very concerted effort against gangs everywhere. In addition to that, he has appointed a new drug czar.

In those remarks, Clinton appeared to endorse the subsequently discredited theory that American cities were threatened by a swelling wave of violent crime from a new generation of young “superpredators.”

That theory, as a New York Times video report shows, was eventually described as wrongheaded and destructive even by the political scientist most associated with the term, John J. DiIulio Jr. — but not before it helped justify a wave of harsh sentencing guidelines for juveniles across the country.

Looking back at the superpredator panic of the 1990s two years ago in the Times, Clyde Haberman explained that it was based on flawed demographic research:

What happened with the superpredator jeremiads is that they proved to be nonsense. They were based on a notion that there would be hordes upon hordes of depraved teenagers resorting to unspeakable brutality, not tethered by conscience. No one in the mid-1990s promoted this theory with greater zeal, or with broader acceptance, than John J. DiIulio Jr., then a political scientist at Princeton. Chaos was upon us, Mr. DiIulio proclaimed back then in scholarly articles and television interviews. The demographics, he said, were inexorable. Politicians from both major parties, though more so on the right, picked up the cry. Many news organizations pounced on these sensational predictions and ran with them like a punt returner finding daylight.

But a funny thing happened on the way to the apocalypse. Instead of exploding, violence by children sharply declined.

On Thursday, Clinton told Jonathan Capehart of the Washington Post that, on reflection, she does now regret her choice of language. “In that speech, I was talking about the impact violent crime and vicious drug cartels were having on communities across the country and the particular danger they posed to children and families,” she said in a statement. “Looking back, I shouldn’t have used those words, and I wouldn’t use them today.”

As our colleague Liliana Segura reported last year, the impact of the criminal justice legislation enacted during Bill Clinton’s time in office is still being felt today by current and former juvenile inmates and their families.

Xavier McElrath-Bey, who grew up amid extreme poverty, abuse, and neglect, and was sentenced to 25 years in prison at the age of 13 for a gang-related murder on Chicago’s South Side, told a conference in Dallas that children like him had been pathologized as intrinsically bad. “We’ve come from a generation that they were saying were ‘superpredators,’” he said. “They said that we were incorrigible, that we were beyond repair. They stated that we were godless, fatherless, heartless monsters. These were professors and researchers who fed the media the hype of an impending flood of juvenile crime that never actually occurred.”

Late Thursday, the activist who confronted Clinton posted a statement on Twitter rejecting the candidate’s apology as insufficient.

In a video interview with USUncut, Williams told Nathan Wellman and Winnie Wong, a co-founder of People For Bernie, “I wanted her to apologize to black people and other people of color who have been affected by mass incarceration in a very real material way. And I also wanted her to take responsibility for the ways in which she was complicit in those things.”

Williams added that her doubts about Clinton were also motivated by “inappropriate comments” about President Obama “being a black person running for President,” during their battle for the 2008 Democratic nomination.