Donald Trump has a loyal following among white nationalists and the Ku Klux Klan. 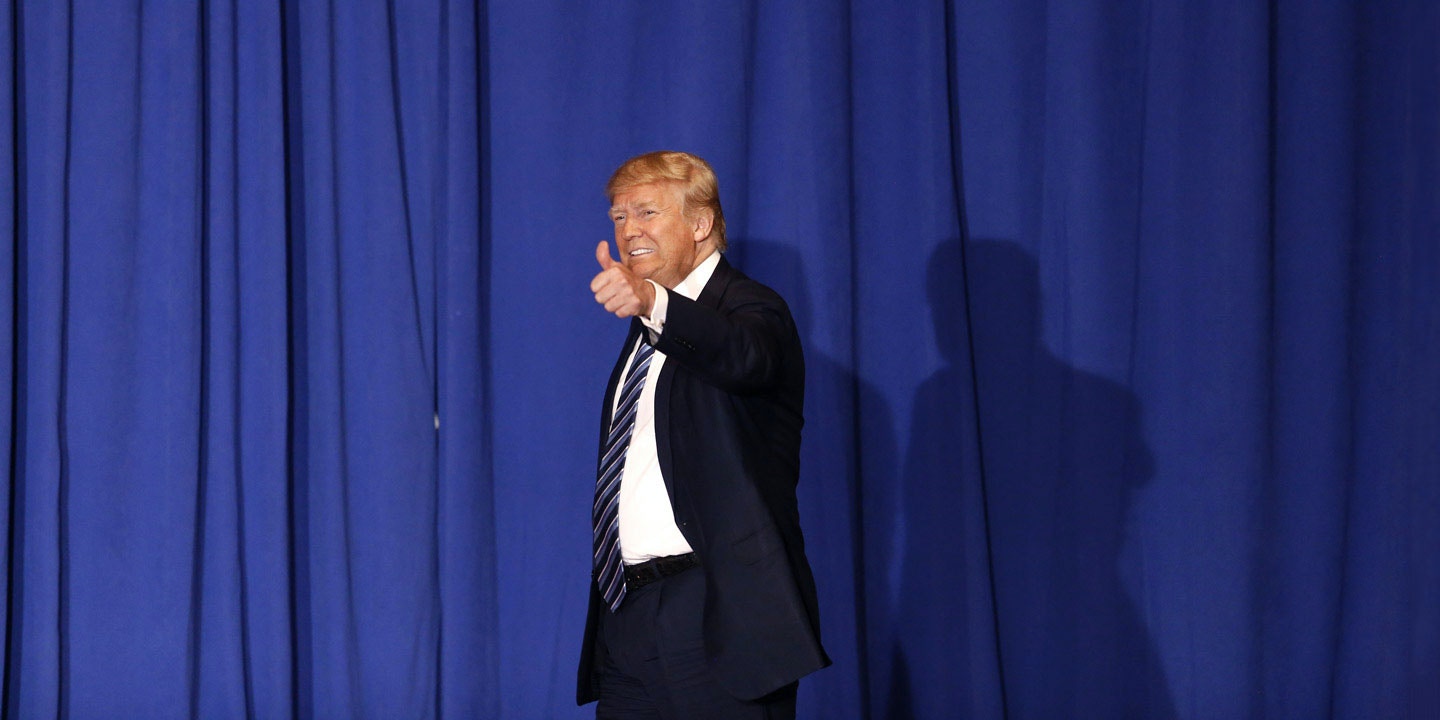 AFTER TWO DECADES of studying the inner workings of extremist groups in the United States, Brian Levin, a professor at California State University in San Bernardino, has developed a routine for attending Ku Klux Klan rallies. He’ll tape an interview or two, collect whatever literature is available, see if he can spot any notable figures, and make a count of the demographics on hand. The aim, Levin says, is to maintain a degree of anonymity. That was the plan Saturday afternoon when he showed up to Pearson Park in Anaheim, California, for a demonstration by the local chapter of a Klan faction known as the Loyal White Knights.

At around 12:08 p.m., a black SUV carrying several Klansmen arrived at the park. It soon became clear that Levin’s hope for a quiet afternoon of anonymous research was shot. There were a few dozen counterprotestors waiting for the Klan. “Fuck Racism — Love Is The Answer,” said one demonstrator’s sign. “Save a cross, burn a racist,” said another. The Klansmen stepped out of their vehicle. They wore black uniforms with confederate flags on their shoulders and patches that said “The original boys in the hood.” Levin said the confrontation — both verbal and physical — between the two sides was instantaneous.

“It was immediate,” Levin recalled in an interview with The Intercept.

The professor found himself on the driver’s side of the Klan’s SUV as a fight was breaking out on the other side. Images from the melee, including video Levin shot on his phone and photos from photographers on the scene, depict a chaotic situation. Two counterprotestors are seen punching a Klansman holding a small knife on a blood-splattered sidewalk.

“The best chance that whites have”

After police arrived on the scene in Anaheim, Levin asked some of the Klansmen about the motivations for their demonstration. They explained that the theme of the day was “White Lives Matter” and that their primary focus was immigration and a fear of school children being indoctrinated into Islam. One of the Klansmen told Levin he was a Donald Trump supporter. When asked if that was common among the groups he studies, Levin told The Intercept, “Oh, gosh yeah.” He added, “Many of the groups that I monitor are explicit for Mr. Trump. … They think that he’s the best chance that whites have.”

The violence in California erupted two days after David Duke, arguably the most recognizable name in the white nationalist movement and an ideological forefather of the Loyal White Knights, called on white people to support Trump, the Republican frontrunner, arguing that failing to do so would amount to “treason to your heritage.” When asked about Duke’s support on CNN Sunday, Trump said, “Well, just so you understand, I don’t know anything about David Duke.” He added: “I don’t know anything about what you’re even talking about with white supremacy or white supremacists.”

Trump’s failure to immediately repudiate Duke’s endorsement triggered a political firestorm, with condemnations coming from both sides of the aisle. (Trump appears to have first been asked about Duke on the campaign in August, when he told Bloomberg TV he would “certainly repudiate” the racist leader “if that would make you feel better.”) His claim to ignorance appeared patently disingenuous, particularly given that in 2000, in his decision not to run for president on the Reform Party ticket, he explicitly distanced himself from Duke. Amid the pushback on Sunday, Trump later tweeted a clip from a press conference on Friday in which he disavowed Duke’s support.

Trump’s appeal to the white supremacist community has been documented before. In June, less than two weeks after he announced his candidacy, Trump received an endorsement from the nation’s most popular neo-Nazi website, the Daily Stormer (the site often refers to Trump as “Glorious Leader” and features his face on the top of its homepage). In an August article for the New Yorker, Jared Taylor, the former editor of the defunct white nationalist magazine American Renaissance, said, “I’m sure he would repudiate any association with people like me, but his support comes from people who are more like me than he might like to admit.” Taylor has since spearheaded an unauthorized robo-calling campaign on behalf of Trump, dubbed “Great White Hope,” telling potential voters, “We don’t need Muslims. We need smart, well-educated white people who will assimilate to our culture. Vote Trump.”

For his part, Trump has also reflected white supremacist talking points online. In November, he tweeted a bogus statistic, popular among hate groups and peddled by the Council of Conservative Citizens, the modern extension of the White Citizens Councils of the 1950s and ’60s, claiming that 81 percent of white homicide victims were killed by African-Americans. Taylor, the robocaller, serves as spokesperson for the CCC. Trump’s troubling retweets continued Sunday, when he shared a quote by the Italian fascist dictator Benito Mussolini. “It is better to live one day as a lion than 100 years as a sheep,” the tweet read.

"@ilduce2016: “It is better to live one day as a lion than 100 years as a sheep.” – @realDonaldTrump #MakeAmericaGreatAgain"

The account, which features a portrait of Mussolini wearing a Trump-style blond toupee, was a bot, created by the news website Gawker with the deliberate intent of luring Trump into a retweet.

“I haven’t seen this kind of support for a mainstream candidate since, perhaps, Pat Buchanan and George Wallace,” Levin said. “We’re seeing amped-up prejudices that previously were really confined to the extremist world just permeating over like ocean waves over a sand castle into the mainstream.”

Heidi Beirich, head of the Intelligence Project at the Southern Poverty Law Center, echoed Levin’s concerns, saying that in her 17 years at the extremist watchdog organization she has never seen anything quite like Trump’s appeal within the white nationalist community. While she acknowledged that Trump’s supporters should not be painted with a broad brush, she cautioned that “We need to remember this country has a constituency of people who aren’t in hate groups but hold very racist beliefs. That’s not all Trump supporters, but that’s certainly more than the bona fide white supremacists.”

“It’s unbelievable to have this kind of hate in the mainstream,” Beirich said. “This is a country that’s incredibly diverse and what he is appealing to are people who would like to ethnically cleanse the United States and, in the case of David Duke, exterminate Jews. I don’t know what to say.” Beirich said both the Republican establishment and the media have largely failed to hold Trump accountable for his rhetoric on race and the policies he proposes. “He really needs to be held accountable for this,” Beirich said. “This is the worst of American society. It cannot be condoned.”