The killing of student Giulio Regeni, widely blamed on Egyptian security forces, leads to harsh condemnation in a European resolution. 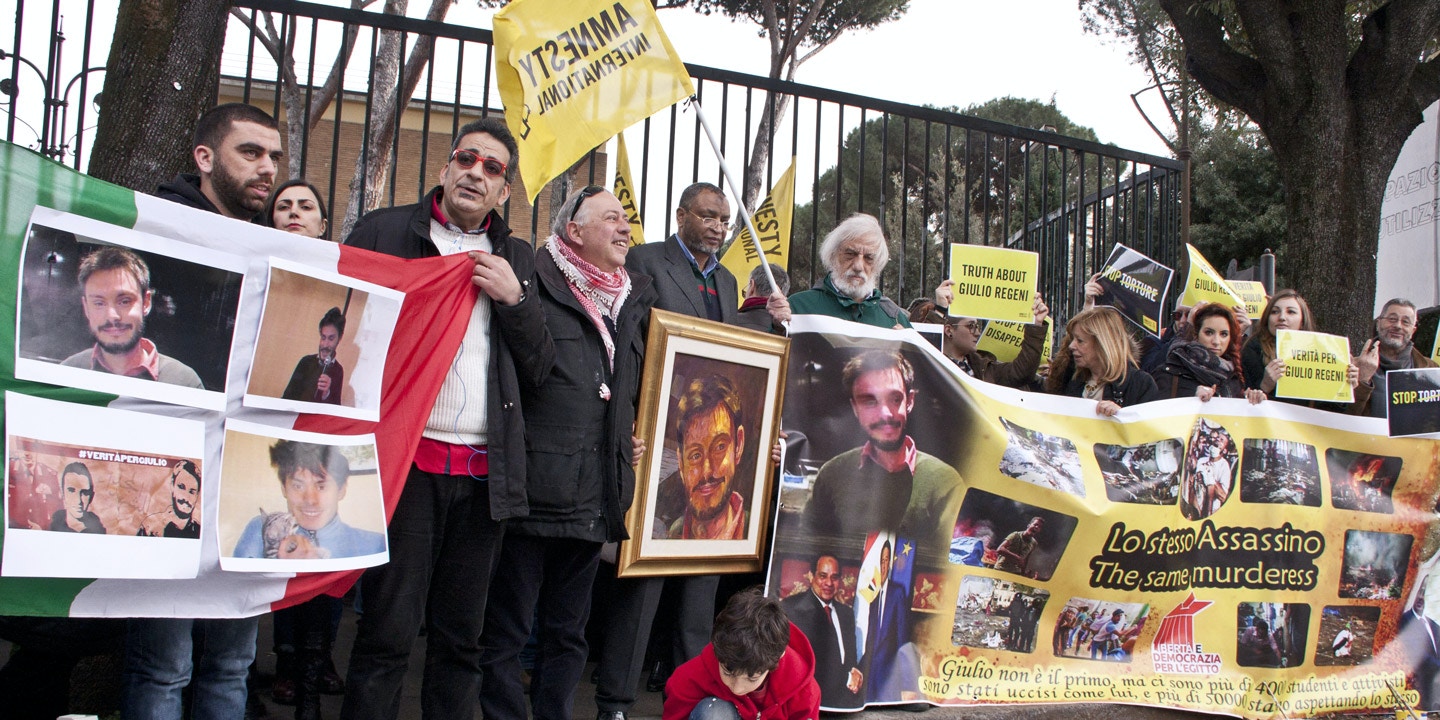 THE EUROPEAN PARLIAMENT is scheduled to vote tomorrow on a resolution that strongly condemns “the torture and assassination” of Italian student Giulio Regeni in what the resolution describes as a pattern of “torture, death in custody, and enforced disappearances across Egypt.”

Regeni, a 28-year-old Italian researcher, disappeared in Cairo on January 25, the fifth anniversary of the uprising that ousted former President Hosni Mubarak. Regeni’s body was found last month on a highway on the outskirts of Cairo bearing signs of torture. Italy’s interior minister said Regeni had suffered “inhuman, animal-like” violence. Egypt’s security forces, notorious for arbitrary arrests and abuse of detainees, are widely suspected of being involved in his death, though the government has denied any involvement.

The resolution describes Regeni’s murder as “not an isolated incident.” The resolution’s language — a draft was posted online today — marks the harshest rebuke of Egypt’s human rights record by European lawmakers since 2013, when the Egyptian military ousted democratically elected President Mohamed Morsi following mass protests against his rule.

The resolution calls for the release of unjustly detained journalists and human rights activists, and it urges the Egyptian government to guarantee that civil society organizations and independent trade unions — the groups that Regeni was researching in Egypt — can operate freely. It specifically criticizes a government order from last month for the closure of the Nadeem Center for the Rehabilitation of Victims of Violence, a prominent human rights group, as well as the ongoing harassment of the Egyptian Commission for Rights and Freedoms, another local advocacy group.

The resolution also urges EU member states to adhere to past commitments restricting the sale of military equipment and technology that could be used in human rights violations.

“There are strong pressures by France and the United Kingdom to lift the European Union Council position calling on states not to export weapons [to Egypt] that can be used for internal repression,” said a political staffer at the European Parliament who asked to remain anonymous because he was not authorized to discuss the issue. “There has been almost no EU voice against the degrading human rights situation in Egypt because of U.K. and French pressure.”

France has emerged as one of Egypt’s key military partners. Last year, the French government signed a $5.6 billion military deal with Egypt that includes the sale of 24 Rafale fighter jets, a naval frigate, and missiles. Meanwhile, the United Kingdom has ramped up its arms sales to Egypt, authorizing over $70 million worth of military sales in the first three months of 2015, a 3,000 percent increase over the previous year.

Additionally, in a report last month, Privacy International, a London-based watchdog organization, revealed that European companies — including German, Finnish, and Italian firms — have been selling powerful surveillance technology to a secretive intelligence agency in Egypt.

“There’s many issues with regard to repression and rule of law that have to be addressed, but there are a lot of members that want to look at security cooperation instead,” said Marietje Schaake, a European member of parliament from the Netherlands, in an interview with The Intercept. “We have to address human rights violations in Egypt. I think it is a mistake to treat Egypt as a partner that will help us fight terrorism and create stability when in fact internal repression will achieve exactly the opposite. … We have to learn from the past.” Schaake, who has lobbied for the resolution, said it is widely expected to pass.

The resolution comes as the Obama administration is looking to roll back restrictions Congress has placed on foreign aid to Egypt, which is the second largest recipient of U.S. military aid after Israel. Under current law, 15 percent of aid to Egypt is subject to being withheld based on human rights conditions — although even that can be waived if it is deemed to be in the national security interest of the U.S., as it was last year.

Secretary of State John Kerry defended the administration’s stance in congressional budget hearings last month. “We’ve got a huge interest in making sure that Egypt doesn’t go down into a more difficult status than it is,” he said.

Top photo: Hundreds of people, including activists with Amnesty International, have demonstrated peacefully in front of the Egyptian Embassy to ask for clarity and justice in the death of Giulio Regeni.