Don’t save your money, he says; spend it! In fact, live above your means — it will fill you with confidence. Getting a job is for losers; the key is to get other people to work for you. 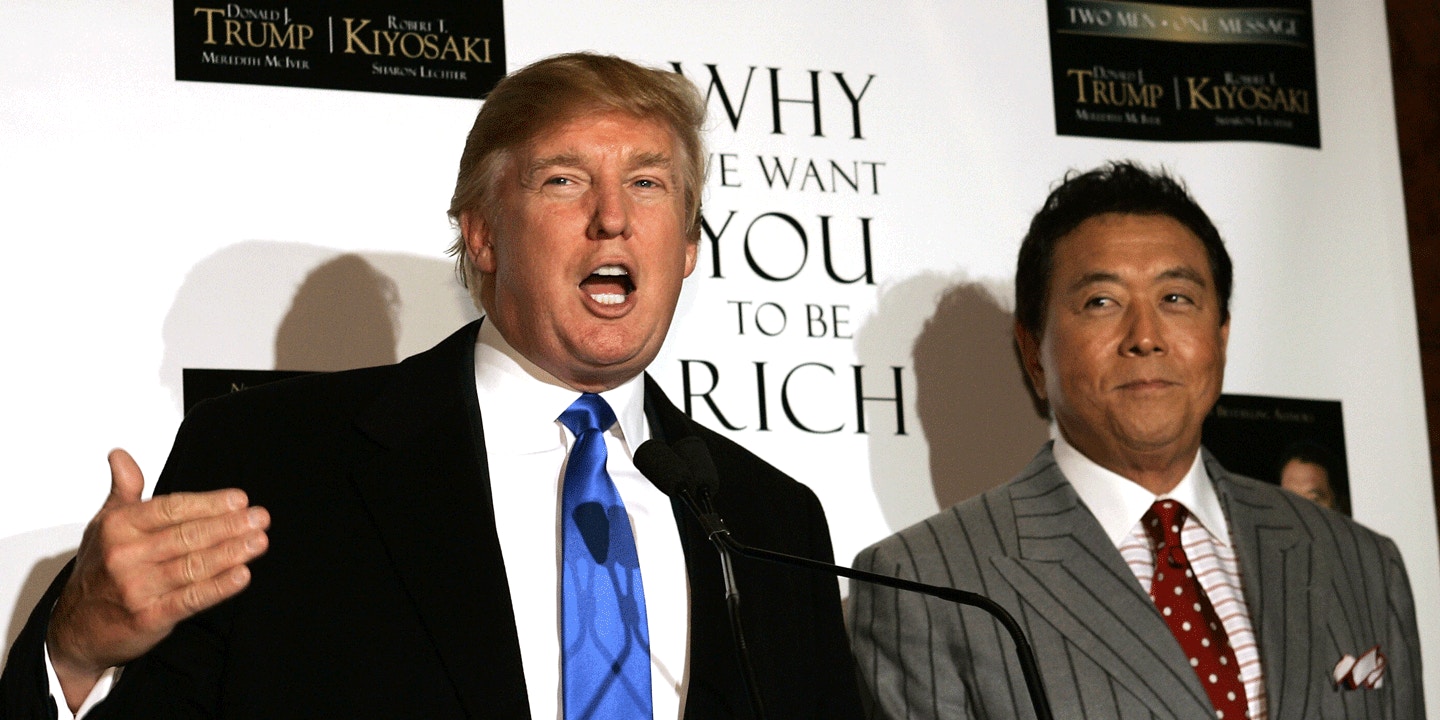 Donald Trump wants YOU to be rich!

But he has some pretty disturbing advice on how exactly you should do that: Don’t save your money, he says; spend it! In fact, live above your means — it will fill you with confidence. Getting a job is for losers; the key is to get other people to work for you. And spend other people’s money, too. Above all, market yourself aggressively and enthusiastically.

And, of course, buy more of his books and take classes through his now-disgraced Trump University.

Trump’s get-rich schemes are described in two books co-authored with the controversial wealth guru Robert Kiyosaki: Why We Want You to Be Rich (2006) and Midas Touch (2011).

In their books, Trump and Kiyosaki — the author of the Rich Dad Poor Dad business book series (guess which one Trump had) — discourage readers from orthodox financial practices such as thrift, or making safe investments in low-risk mutual funds.

The authors instead recommend that readers get involved with network marketing companies — the kinds of businesses that can often be nothing but pyramid schemes. (In a pyramid scheme, the original creators use money coming in from new recruits to enrich themselves and pay off early-stage investors until eventually the pyramid collapses.) Both books by Trump and Kiyosaki repeatedly stress investing in “financial literacy” — by shelling out for their various educational products and seminars. These promotions include an advertisement in Why We Want You to Be Rich for Trump University, the now-defunct real estate training company over which Trump is currently facing three massive fraud lawsuits.

Trump and Kiyosaki frame their advice around the premise that the American middle class is disappearing — in that way, mirroring the rhetoric Trump uses on the stump. Why We Want You to Be Rich describes how “America and many other countries are becoming two-class societies — rich or poor, classes or masses.”

But here, Trump’s goal is not broadening the middle class. It’s getting you to pick your side.

“The rich will spot the opportunities,” Trump writes in Why We Want You to Be Rich, “while the poor will hide their heads and pretend it isn’t happening.”

Explaining why he and Trump got together for their first book, Kiyosaki writes in Midas Touch that “as the middle class disappears, there’s only one of two ways you can go: rich or poor. We want you to be rich.”

Trump and Kiyosaki are big fans of network marketing companies, where compensation is based on recruiting more members into the company. The two authors devote an entire chapter to network marketing in Why We Want You to Be Rich and write positively of the business model in Midas Touch.

Rebuffing claims that network marketing is a pyramid scheme, Kiyosaki writes that “corporations are really pyramid schemes. A corporation has only one person at the top, generally the CEO, and everyone else below.”

“A network marketing business,” Kiyosaki later adds, “is designed to bring you up to the top, not keep you down at the bottom.” 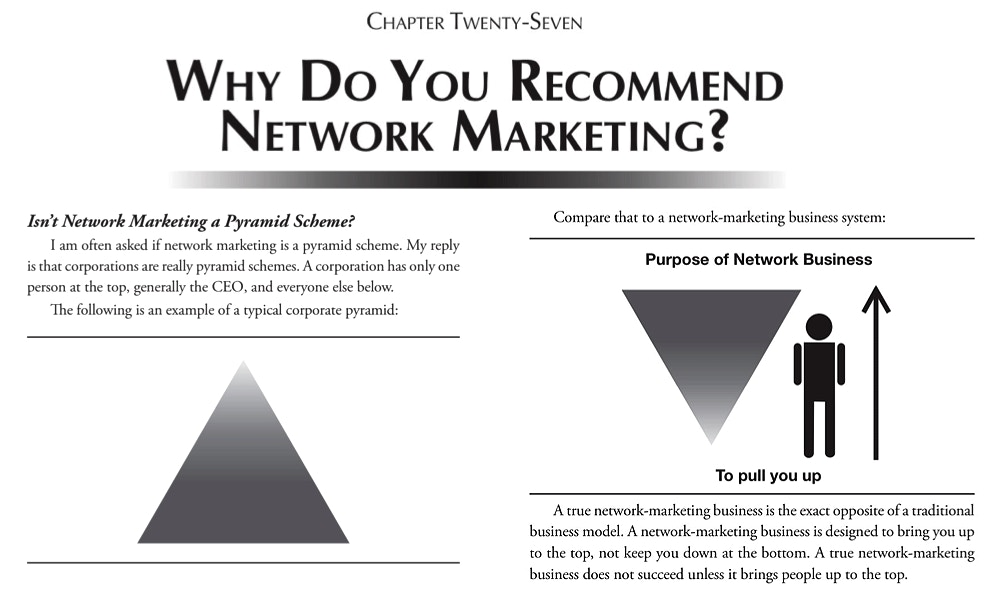 Trump gives a more measured endorsement of network marketing, writing positively of the opportunity to learn sales and advertising techniques. “My nutshell advice about network marketing is to do your research and then put everything you’ve got into your product. Genuine enthusiasm is hard to beat, and the odds will be with you,” Trump writes.

As it happens, Trump has some personal experience in that realm. He licensed the Trump Network in 2009, a venture that peddled health supplements through a network marketing business scheme. The supplements had little science behind them, and when Trump’s licensing agreement ended in 2012, the company was unable to pay its lab, vendors, or marketers.

In both Why We Want You to Be Rich and Midas Touch, Trump and Kiyosaki discourage their readers from taking jobs and “working hard” for money when they can become entrepreneurs and investors.

“When Donald and I think about working hard,” Kiyosaki writes in Why We Want You to Be Rich, “while we both work hard individually, we mostly think about other people working hard for us to help make us rich.”

Kiyosaki uses the acronym “OPT,” or “other people’s time,” to describe this method of getting rich. Likewise, Kiyosaki and Trump employ “OPM,” or “other people’s money,” in reference to taking out loans for investments, recommending their readers take on “good debt” in pursuit of becoming rich. They encourage readers to invest in real estate, oil companies, and gold and silver mines, while discouraging investment in any and all mutual funds.

“Given the choice between buying mutual funds or a fake Rolex,” Kiyosaki writes in Midas Touch, “I would take the fake Rolex.”

Trump and Kiyosaki also dismiss saving money or living frugally as antithetical to the entrepreneurial mindset. In Why We Want You to Be Rich, Trump writes, “So many people think cheap and buy cheap. You can get rich by being cheap, but who wants to be a rich cheap person?”

Likewise, in an infomercial with Kiyosaki, Trump discusses an unnamed friend who would only fly first class even when he was in financial trouble because “he needed it mentally. … He wanted to fly first class because mentally, he wanted to think he was the best. … It put him in a good state of mind and he became a very, very successful guy.”

The notion of “living below your means” actually cracks Kiyosaki up on camera. “When you say to somebody ‘live below your means’ you wipe their spirit out,” Kiyosaki says. He later describes instructing people to pinch pennies as “almost inhumane.”

On the campaign trail, Trump calls for tariffs and retaliation against trading partners and assures Americans that he would keep them safe, but the introduction to Why We Want You to Be Rich explains that “governments, even the U.S. government, cannot protect their people as they once could” from threats like globalization, terrorism, and the collapse of the middle class. 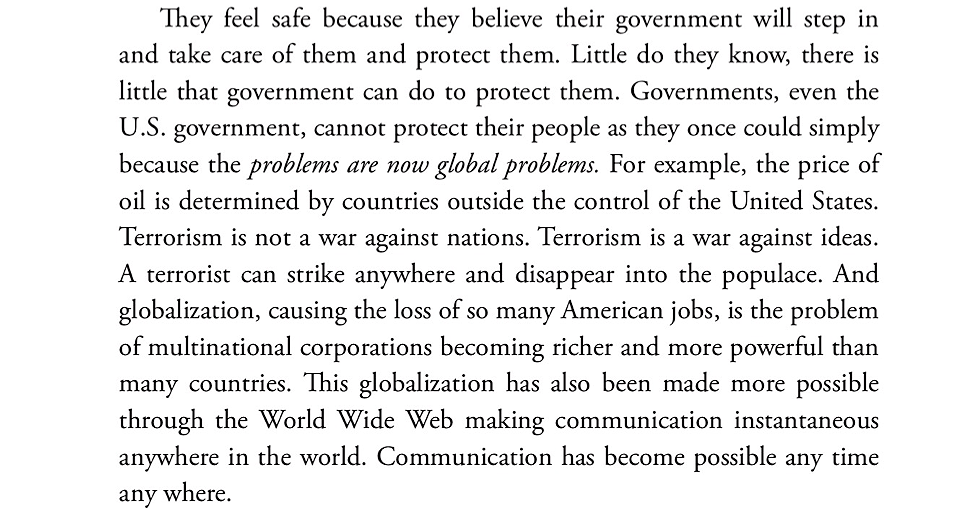 Trump and Kiyosaki’s books assert that “no government, neither ours nor theirs, can create real jobs.” Job creation, they argue, can only be done by entrepreneurs. But both books contain little to no discussion of management or hiring practices, for instance.

By contrast, during his campaign, Trump has promised college students that they will all have jobs when they graduate because he will be “the greatest jobs president that God ever created.”

Top photo: Donald Trump and author Robert Kiyosaki hold a 2006 press conference at Trump Tower to promote Why We Want You to Be Rich: Two Men, One Message. 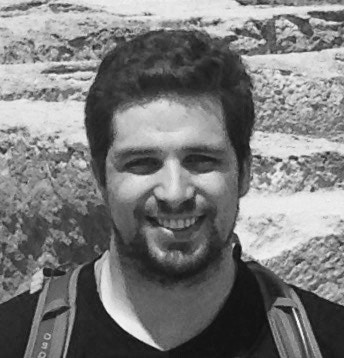