In light of her long record, Clinton’s campaign is an odd vessel for demonizing others for their support for human-rights abusers.

At Wednesday night’s Democratic debate, Hillary Clinton attacked Bernie Sanders for praising Fidel Castro in the 1980s, as well as for standing with Central American governments and rebel groups targeted by Ronald Reagan’s brutal covert wars. “You know,” said the former secretary of state, “if the values are that you oppress people, you disappear people, imprison people or even kill people for expressing their opinions, for expressing freedom of speech, that is not the kind of revolution of values that I ever want to see anywhere.”

To defend her remarks, Clinton’s faithful Good Democratic supporters began instantly spouting rhetoric that sounded like a right-wing, red-baiting Cold War cartoon; in other words, these Clinton-defending Democrats sounded very much like this:

Vehement opposition to Reagan’s covert wars in Central America, as well as to the sadistic and senseless embargo of Cuba, were once standard liberal positions. As my colleague Jeremy Scahill, observing the reaction of Clinton supporters during the debate, put it in a series of tweets: “The U.S. sponsored deaths squads that massacred countless central and Latin Americans, murdered nuns and priests, assassinated an Archbishop. I bet commie Sanders was even against Reagan’s humanitarian mining of Nicaraguan waters & supported subsequent war crimes judgment vs. U.S. Have any of these Hillarybots heard of the Contra death squads? Or is it just that whatever Hillary says must be defended at all costs? The Hillarybots attacking Sanders over Nicaragua should be ashamed of themselves.”

Let’s pretend for the sake of argument that the horror expressed by Clinton and her supporters over Sanders’s 1980s positions on Latin America was all driven by some sort of authentic outrage over praising tyrants and human rights abusers rather than a cynical, craven tactic to undermine Sanders using long-standing right-wing, red-baiting smears. Is Hillary Clinton a credible voice for condemning support for despots and human rights abusers? To answer that, let’s review much more recent evidence than the 1980s: Clinton on Face the Nation, 2011, arguing that Qaddafi is worse than Assad:

There’s a different leader in Syria now. Many of the members of Congress of both parties who have gone to Syria in recent months have said they believe he’s a reformer. … There’s a difference between calling out aircraft and indiscriminately strafing and bombing and strafing your own cities, than police actions which frankly have exceeded the use of force that any of us would want to see.

As PolitiFact noted, Clinton phrased the “reformer” comment as something “members of Congress” believe, but it was cited by her in order to favorably compare Assad to Qaddafi: “Clinton’s choice to talk about those members’ opinions of Assad without knocking them down suggests she may have found them credible.” The right-wing coup government in Honduras 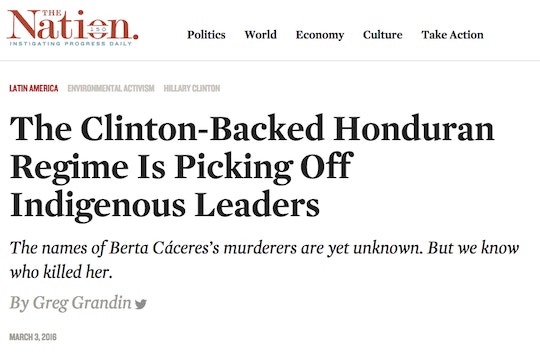 Clinton over the last decade: 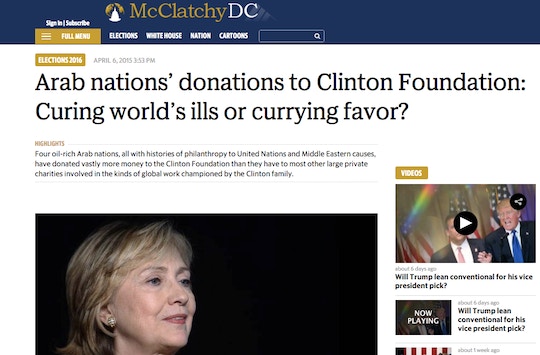 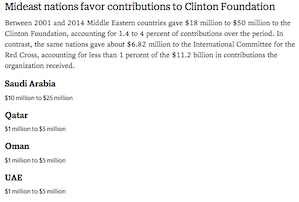 Clinton as secretary of state: As International Business Times reported last year, the Clinton-led State Department approved arms sales and transfers to a slew of human-rights-abusing regimes, which also just so happened to have donated large amounts of money to the Clinton Foundation: The Saudi deal was one of dozens of arms sales approved by Hillary Clinton’s State Department that placed weapons in the hands of governments that had also donated money to the Clinton family philanthropic empire. … The State Department formally approved these arms sales even as many of the deals enhanced the military power of countries ruled by authoritarian regimes whose human rights abuses had been criticized by the department. Algeria, Saudi Arabia, Kuwait, the United Arab Emirates, Oman, and Qatar all donated to the Clinton Foundation and also gained State Department clearance to buy caches of American-made weapons even as the department singled them out for a range of alleged ills, from corruption to restrictions on civil liberties to violent crackdowns against political opponents. It seems that, overnight, Clinton and her supporters have decided that Sanders’s opposition to Reagan-era wars against Latin American governments and rebel groups — a common liberal position at the time — is actually terribly wrong and something worthy of demonization rather than admiration, because those governments and groups abused human rights. Whatever else one might say about this mimicking of right-wing agitprop, Hillary Clinton for years has been one of the world’s most stalwart friends of some of the world’s worst despots and war criminals, making her and her campaign a very odd vessel for demonizing others for their links to and admiration of human-rights abusers.