Sheldon Adelson’s Israeli Newspaper Has a Crush on Donald Trump 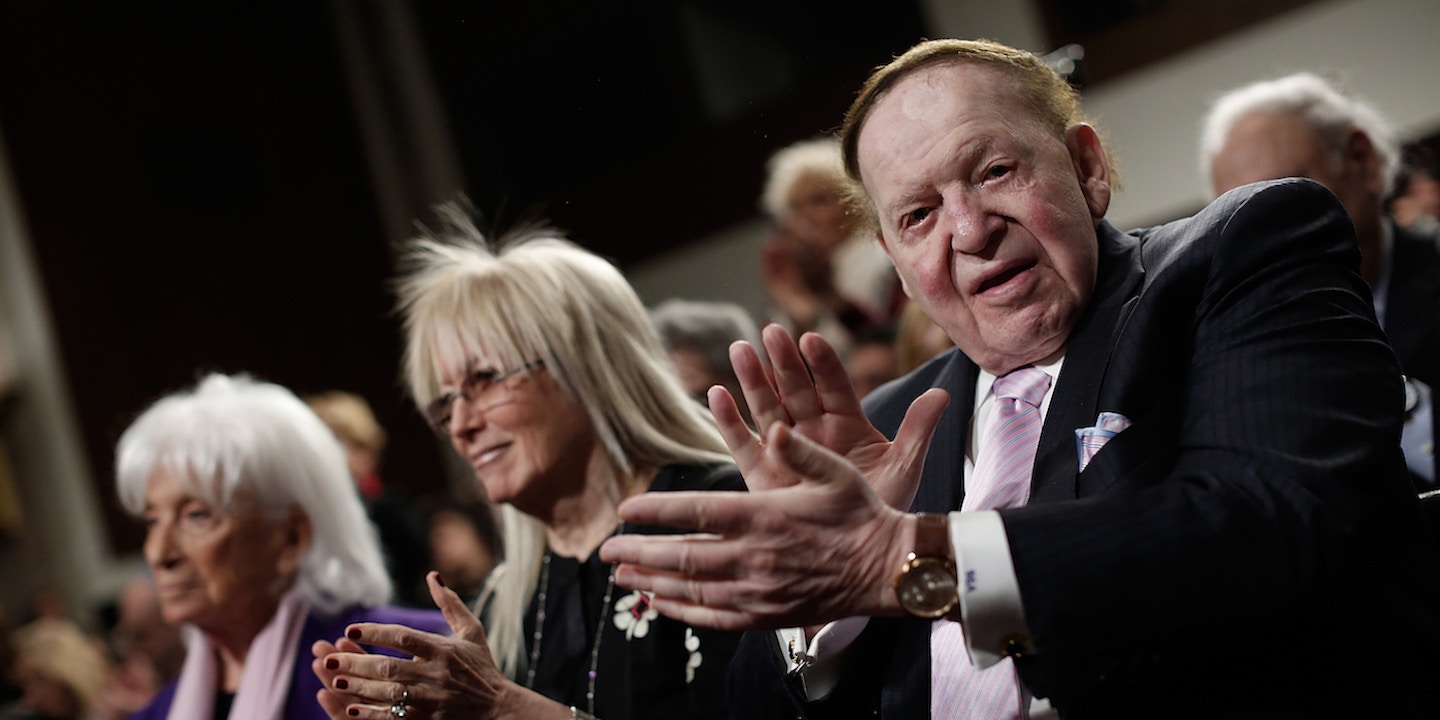 While Sheldon Adelson has yet to endorse a candidate for president, and refused to let reporters peek at his ballot at last month’s caucus in Nevada, it’s starting to look like the conservative rebellion against Donald Trump will not be bankrolled by the casino operator and Republican donor known for his far-right views.

Three times this week, the front page of the Israeli tabloid Adelson set up to support Benjamin Netanyahu’s Likud party, Israel Hayom (Israel Today), has featured fawning coverage of Trump. The newspaper is widely seen in Israel as a megaphone for Adelson’s own views. 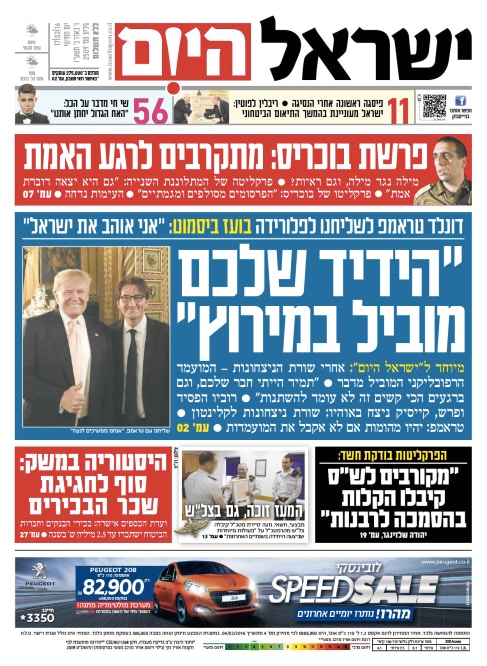 The front page of Friday’s print edition of Israel Hayom.

On Friday, the Hebrew-language print edition featured an interview with Trump — translated into English online — in which he assured Israelis that, far from being “neutral” on the Middle East, his election would be “tremendous news for Israel.”

His message to Israelis, Trump told the paper’s foreign editor, Boaz Bismuth, was this: “Your friend is leading in the primaries. I’ve always been your friend, even at the toughest moments. And that’s not going to change. I love you.”

Bismuth got little else from Trump, except the assurance that his election would also be “less good news for those who don’t like Israel,” but the rest of his report, a star-struck ode to ostentatious wealth, reads like it could have been written by Trump’s publicist, or his doctor.

Several hours earlier, I had arrived at Mar-a-Lago club in a cab driven by Boris, a Peruvian-born Israeli who moved to Florida. Boris told me that the Mar-a-Lago club is one of the most impressive places not just in Florida, but also the entire United States. At the gate, a striking blonde attendant named Heather greeted me. “Welcome to the Mar-a-Lago,” she said.

The Mar-a-Lago club has become a center of attention during the Republican primaries. Trump bought the estate in 1985 and turned it into a 126-room paradise. And that is what Americans are hoping Trump will do with their bank accounts: take $15 or $150 and multiply it by who knows how many times.

I must admit I was excited to be among the 300 media members (most of them Americans) invited to the press conference. A Trump event is the best show in town. And to see Trump on his home turf in a luxurious setting (think gold bathroom fixtures and huge chandeliers) reminiscent of “One Thousand and One Nights” is an incomparable experience. I got to see up close the man who is the main focus of global media attention today.

Each new meeting with Trump is just as fascinating as the previous one.

After Trump’s primary victories earlier this week, the newspaper told its readers on Thursday that he was “Nearly There.”

Front page of Adelson mouthpiece Israel Hayom has pic of Trump and headline “Within Reach.” pic.twitter.com/jZ0ckdRWKJ

On Tuesday, under the banner headline “Trump Not Afraid to Say ‘Islamic Terrorism,’” the candidate’s praises were sung by his old friend Rudy Giuliani, the former New York mayor whose own failed bid for the presidency in 2008 was bankrolled by Adelson.

Sheldon Adelson's paper is aggressively campaigning for Trump in an attempt to sway Israeli public in his favor pic.twitter.com/bAiGCuFZmz

Inside, there was a transcript of Bismuth’s long chat with Giuliani, conducted partly in Jerusalem and partly in Las Vegas, where the former mayor had attended a gala in his honor staged by Adelson last month. (According to Tal Schneider, an Israeli blogger who obtained video of that event, Adelson answered the question of whether he might support Trump by saying: “Trump is a businessman. I am a businessman. He employs a lot of people. I employed 50,000 people. Why not?”)

Giuliani, who told Bismuth that he was both “a friend and an informal adviser” to Trump, tried to downplay the candidate’s outrageous side. “Maybe because of his background as the host of [a] reality TV show, I think he has sort of developed a television personality that is prone somewhat to exaggeration,” Giuliani said. “The real Trump is not like that. The real Trump is thoughtful, intelligent, and very well-educated. He has extensive political knowledge and he chooses to support good people, so I don’t understand all the fear about him.”

Although it is published in Tel Aviv, Adelson has previously tried to use the newspaper to drum up support from Jewish voters in the United States for candidates he supports. After Mitt Romney lost the 2012 presidential election, despite strong support from Adelson and Netanyahu, Israel Hayom reported President Obama’s reelection under the headline: “America Chose Socialism.” As the Israeli journalist Noam Sheizaf reported at the time, on the eve of that election, the tabloid’s news section quoted from opinion pieces by both Adelson and his Israeli wife, Miriam, in which they had urged readers with American passports to vote for Romney.