Imprisoned With Her Baby, Bahraini Activist Is Victim of U.S. Silence, Sister Says

For charges of tearing up a picture of Bahrain’s monarch, human rights activist Zainab al-Khawaja will be imprisoned for up to three years. 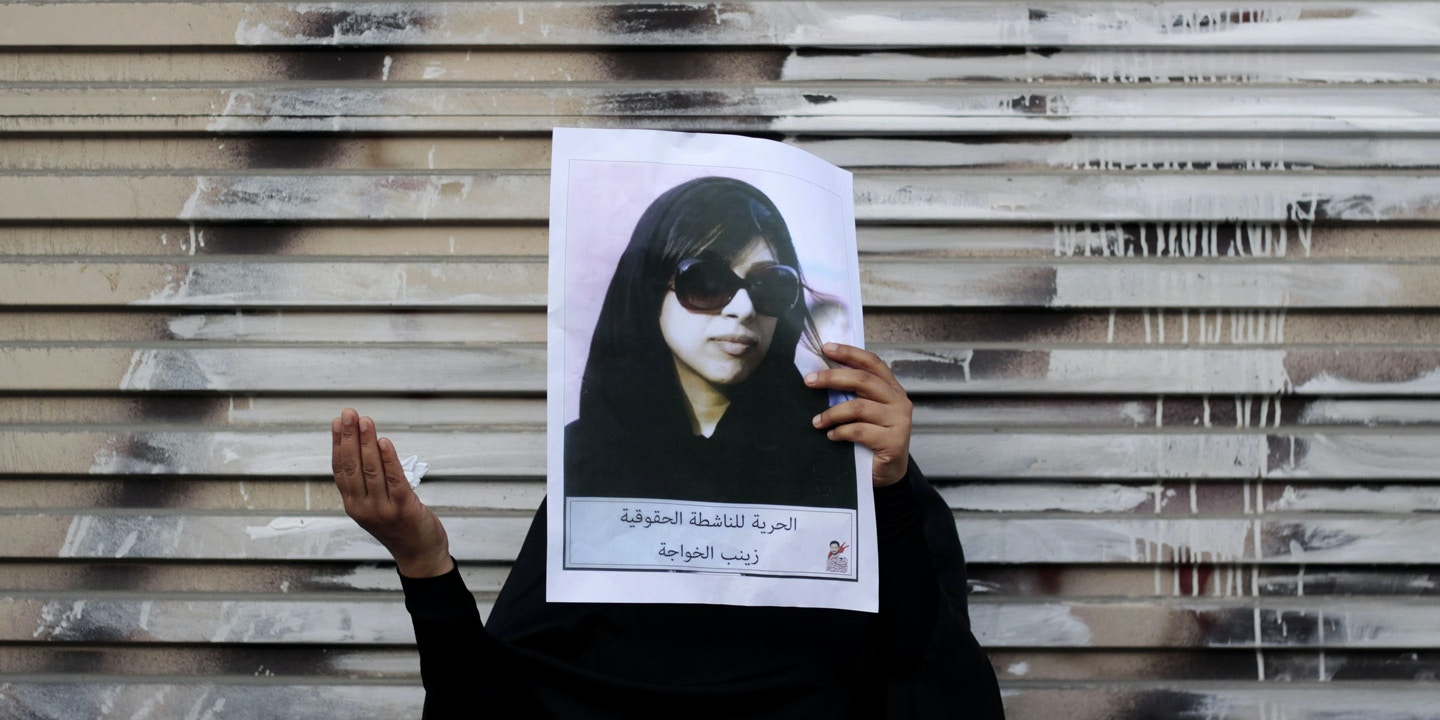 LAST MONDAY, Bahraini security forces arrested prominent human rights activist Zainab al-Khawaja and her 15-month-old son. The arrest came on the fifth anniversary of a Saudi military intervention that crushed an uprising by Bahrain’s Shiite majority and marked a grim milestone in the country’s crackdown on dissidents.

Al-Khawaja was taken into custody to serve a prison term that could run between one and three years after being found guilty in 2014 of charges related to the uprising. The main charge against her relates to an incident in which she insulted the country’s monarch by tearing up one of his ubiquitous portraits, a criminal offense in Bahrain. Her arrest this week, along with her infant son, signaled the government’s intention to enforce the sentence. According to her family, her son will remain incarcerated with her until he reaches the age of 2.

Al-Khawaja and her sister Maryam emerged as iconic figures of the 2011 uprising. Their father, Abdulhadi, also a high-profile human rights activist, was sentenced to life imprisonment after the revolution was quashed. Speaking to The Intercept, Maryam al-Khawaja says that continued U.S. silence over the regime’s human rights abuses is helping to facilitate her sister’s and father’s continued detention. “Until there is international accountability, especially from close allies like the United States, we’re never going to have local accountability in Bahrain,” says al-Khawaja.

At a State Department press conference the day of the arrest, officials declined to call for Zainab al-Khawaja’s release, instead calling on Bahrain to “follow due process in all cases,” an ironic statement in light of the fact that al-Khawaja has already been convicted of her charges. Human rights organizations have also noted that Bahrain does not have a free and fair judiciary, particularly in cases of political detention. A Human Rights Watch report issued last November also documented the ongoing torture of detainees held in Bahraini prisons.

In a 2011 speech on the Arab Spring, President Obama called on Bahrain to release political prisoners and end its crackdown on dissidents. Since then, however, the U.S. government has been largely muted in its response to Bahrain’s continued repression. Part of this hesitancy stems from the perceived strategic value of the relationship with Bahrain and other Gulf Arab states. Aside from economic and political ties, the island also hosts the U.S. Navy’s Fifth Fleet and is viewed as an ally in the region against Iran.

Like other Gulf Arab countries, Bahrain has an extensive lobbying operation in the United States to help sway policy in its favor and spin media coverage. U.S. officials have remained largely quiet in the face of increasingly outrageous instances of democratic suppression.

“The truth is that Bahrain knows it can leverage its strategic relationship with Western powers to great effect, and that there will be no political cost to Zainab al-Khawaja’s incarceration,” says Nicholas McGeehan, a Gulf researcher at Human Rights Watch. “Her imprisonment should cause heads to hang in shame in Washington. Where the Gulf States are concerned, the U.S., the U.K., and the EU have not taken the side of brave and intelligent reformers like al-Khawaja, but with anti-democratic, rights-abusing monarchs.”

Maryam al-Khawaja says that U.S. silence about Bahrain’s actions is viewed by the country’s leaders as a green light for their behavior. “We’ve seen how public statements or silence from the U.S. can affect the behavior of the Bahraini government,” she says. “In the cases of other dissidents who have been arrested, including myself, an indication of disapproval on the part of the U.S. government was enough to convince [Bahrain] to release them.”

During the Bahraini revolution, the al-Khawaja sisters and their father led protest marches and speeches at Bahrain’s famous Pearl Roundabout monument. Fearful of being deposed, the government launched a brutal crackdown that culminated in a military intervention by neighboring Saudi Arabia. In the years since, thousands of Bahrainis have been arrested and rounded up into detention facilities, including Abdulhadi, who was detained, tortured, and sentenced to life imprisonment in 2011. The Pearl Roundabout, a national icon whose image appeared on Bahraini currency, was demolished that same year, when the government claimed it had been “desecrated” by the protests.

Now, as this wave of repression continues, Zainab al-Khawaja faces the prospect of several years behind bars.

Maryam, now based in Copenhagen, says that the actions of the next U.S. president could play a determining role in whether Bahrain enforces her sister’s entire sentence, though the candidates’ rhetoric so far gives her little hope. “Watching the debates, I’m surprised there has been so little pressure on candidates about their views on U.S. relations with oppressive states like Bahrain and Saudi Arabia,” she says. “This election affects people all over the world, not just in the United States. Given how much influence the U.S. has in Bahrain, a willingness from American leaders to speak out about human rights there would decide whether my sister and father remain in jail or not.”

Top photo: After a march in Malkiya, Bahrain, an anti-government protester holds up a picture of jailed human rights activist Zainab al-Khawaja as she participates in a prayer for al-Khawaja’s freedom, March 28, 2013.