Some Israelis describe as “a national hero” an army medic who was filmed shooting a wounded Palestinian suspect in the head last week in Hebron. WHILE HUMAN RIGHTS activists and defense officials in Israel were quick to condemn an army medic caught on video last week shooting a wounded Palestinian suspect in the head, the soldier was defended over the weekend, and even celebrated, by many on the far-right of the country’s political spectrum.

Video released on Sunday by the Israeli rights group B’Tselem, which provides cameras to Palestinians in the occupied West Bank, showed far-right activists in the city of Hebron praised the medic’s actions just minutes after the incident.

The new footage showed Israeli settlers, including Baruch Marzel, the former leader of a banned extremist group, shaking the hand of the medic as the body of his victim was carried away.

According to the Tel Aviv newspaper Haaretz, which published the video with the medic’s face blurred out, the soldier smiled as he was congratulated by Marzel, who offers free pizza to soldiers who kill Palestinians suspected of attacking Israelis.

Marzel announced on Sunday that his political party, Jewish Power, would be holding a rally in support of the medic on Tuesday at a military court in Jaffa, where a ruling to extend his detention is expected. A poster for the rally he shared on Twitter declared: “The state is stabbing the soldier from Hebron in the back. We won’t!” Beneath a crudely Photoshopped image of an Israeli soldier with a bloody knife sticking from his back, the message concluded: “Israel Needs Jewish Power.”

Marzel’s choice of imagery was no doubt inspired by the fact that the Palestinian the medic killed, Abed al-Fattah Yusri al-Sharif, was one of two young men suspected of stabbing an Israeli soldier at a checkpoint in Hebron just before the incident. The metaphor of a nation’s army being stabbed in the back by its civilian political leaders has a dark historical resonance, since it was used by the Nazis to blame Germany’s defeat in the First World War on Jewish politicians.

Elizabeth Tsurkov, an Israeli rights activist, pointed out that the local government of Beit Shemesh, a city outside Jerusalem run by far-right members of the ultra-Orthodox community, not only staged a rally in defense of the medic on Monday, it ignored an injunction against identifying him by using his name and face on a poster that called him a “national hero.”

Beit Shemesh Municipality will hold a rally in support of the Hebron executioner."For us you are the national hero" pic.twitter.com/uADQor0B6X

A wave of support for the medic seemed to build over the weekend. Haaretz reported on Friday that about half the comments on the incident posted online in the first 24 hours after the shooting were critical of the medic. By Saturday, a poll conducted for Israel’s Channel 2 News found that 57 percent of the public said that there was no need to arrest and investigate the soldier, while just 32 percent supported his detention.

As Dahlia Scheindlin explained on the Israeli news site +972, when asked by the pollsters to consider the possibility that the wounded man might have had a bomb, “A plurality of respondents, 42 percent, described his action as ‘responsible,’ while another 24 percent said it was the natural response to the situation.”

Just 19 percent of those surveyed agreed that the medic had deviated from the army’s rules of engagement. Only 5 percent defined the shooting of the wounded suspect as murder, the crime that military police suspect him of committing.

Uri Blau, an investigative journalist who looked closely at what seems to be the medic’s Facebook page, noted with disgust that supporters of the soldier even launched a social media campaign on his behalf.

The wide political & public support in the Hebron shooter shouldn't be presented as a "red flag". It's a moral bankruptcy of a sick society

Gregg Carlstrom, a journalist in Tel Aviv, reported on Sunday that tens of thousands of Israelis had signed a petition calling for Prime Minister Benjamin Netanyahu to give the medic a medal for shooting the wounded suspect.

A petition asking Bibi to give a medal to the soldier who executed a Palestinian in Hebron has ~42,000 signatures. https://t.co/VeDZVd0mod

The text of that petition cited the excuse reportedly offered by the medic to investigators — that he was concerned the wounded suspect might have been wearing a suicide vest he was about to set off. That explanation seems at odds, however, with what can be seen in video of the minutes before the shooting recorded by a Palestinian bystander. In that footage, several soldiers, civilians, and medical workers walk very close to the wounded suspect on the pavement without showing any sign that he might be a threat to them. One soldier could even be seen nudging the suspect from his side onto his back.

As Israel’s Walla News reported, Sharif, who had already been shot and incapacitated, was so unthreatening that one soldier paused next to him to tie his shoes.

The soldier’s case was taken up by Israel’s far-right education minister, Naftali Bennett, who echoed many of the soldier’s defenders by calling the Palestinian suspect a “terrorist” in an outraged Facebook update. 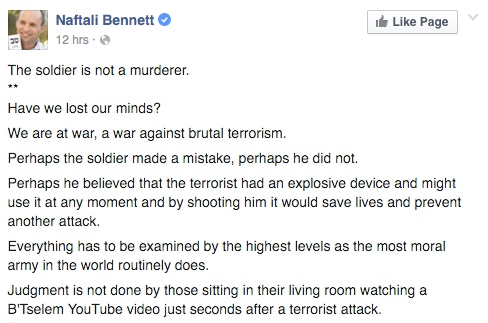 A screen shot of an update posted on Facebook by Israel’s education minister.

(Bennett’s use of the phrase “terrorist attack,” to describe a knife attack not on a civilian but on a soldier at a checkpoint in an occupied city, seems designed to erase the moral complexity of the situation by defining all violent resistance to Israel’s military rule over the Palestinian population as illegitimate.)

Bennett raised the issue at a tense cabinet meeting on Sunday, accusing the prime minister and senior defense officials of “deep moral confusion” for having condemned the medic. Although Netanyahu rebuked Bennett for presuming to doubt his judgment on military ethics, the prime minister made a point of also condemning any questioning of the morality of the Israel Defense Forces as “unacceptable and infuriating.”

Netanyahu’s ally Yuval Steinitz, a minister in the cabinet, staunchly defended the decision to investigate, telling reporters, “The I.D.F. is a very strong and moral army. Even in very difficult conditions of the battlefield, we are not killing prisoners of war or people that are totally paralyzed.”

The investigation into the shooting in Hebron last week follows the killing of more than a hundred other Palestinians suspected of attacking Israelis in the past six months, many of them armed only with knives, leading rights advocates to accuse Israel of giving tacit approval to extrajudicial killings.

Two weeks ago, similar but less clear video appeared to show a volunteer police officer in Jaffa shooting an incapacitated Palestinian militant who had killed an American tourist. Although Israel’s justice ministry announced that it would open an investigation into the volunteer’s behavior, Haaretz reports that no one has been summoned for questioning and no action has yet been taken.

• Can Soldiers Be Victims of Terrorism?