Donald Trump’s campaign manager, Corey Lewandowski, was charged with battery by police in Jupiter, Florida after new video showed him pulling a Breitbart reporter away from the candidate earlier this month. 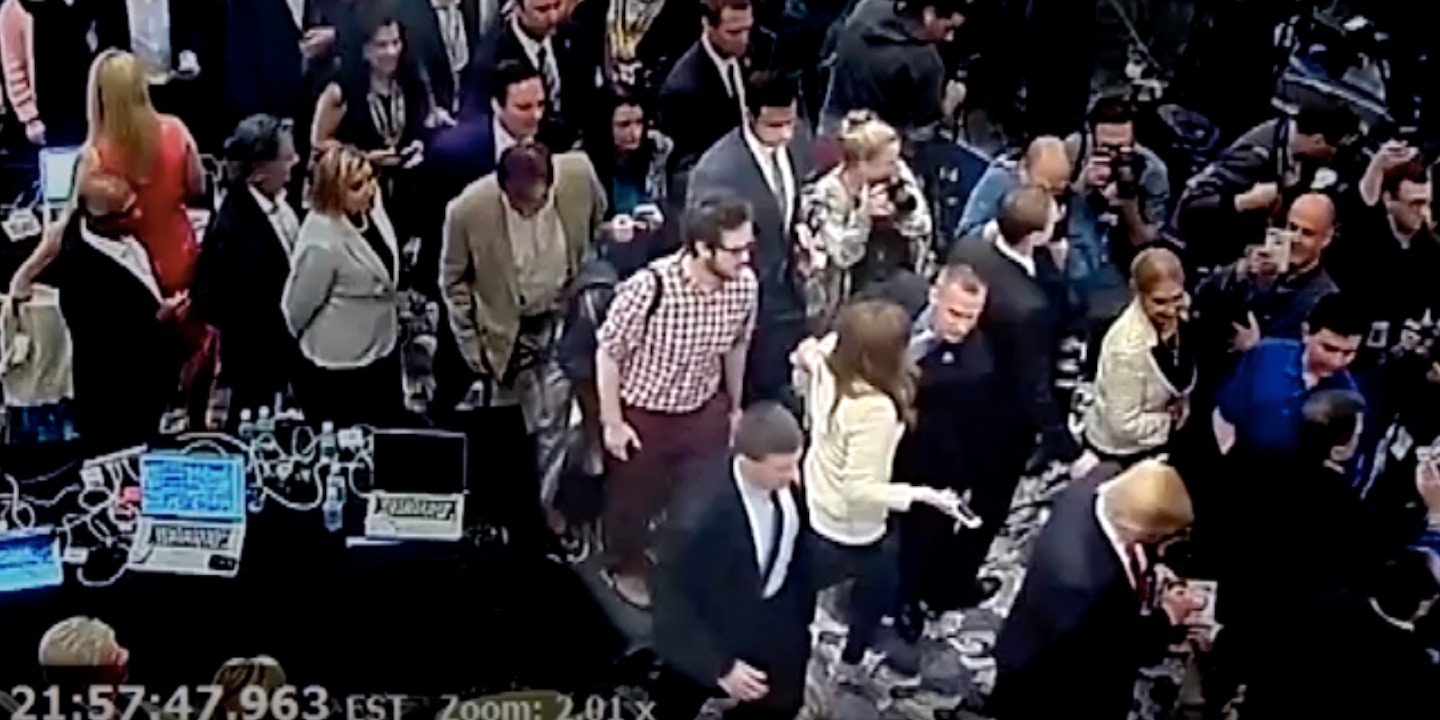 Last Updated | Wednesday, 10:10 am
Donald Trump’s campaign manager, Corey Lewandowski, was charged with battery by the police in Jupiter, Florida on Tuesday, for grabbing the arm of a reporter and pulling her away from the candidate earlier this month.

Although Lewandowski had previously denied touching the reporter, Michelle Fields, video released by the Jupiter Police Department following his arrest showed that the incident was captured by a surveillance camera at the Trump National Golf Club on March 8.

According to the police report, the investigating officer, Marc Bujnowski, obtained the footage “from Trump Security at Trump National in Jupiter” on March 12, one day after Fields filed a complaint.

The origin of the video is important since it shows that when Trump told CNN two days after the incident that the reporter was lying — “perhaps she made the story up, I think that’s what happened” — his own golf club possessed evidence proving that was false.

At the time, Fields was covering Trump for Breitbart News, a conservative publication known for its support for the candidate. She has since resigned, saying that the site’s editors had not supported her.

In a public exchange that played out on Twitter, Fields first posted an image of bruising on her arm she said Lewandowski had caused by yanking her back as she attempted to ask Trump about affirmative action, and the campaign manager then called her “delusional” and insisted that he had never even met her.

I guess these just magically appeared on me @CLewandowski_ @realDonaldTrump. So weird. pic.twitter.com/oD8c4D7tw3

@MichelleFields you are totally delusional. I never touched you. As a matter of fact, I have never even met you.

As the police report notes, the account Fields gave of the incident was supported by a witness,  Washington Post reporter Ben Terris, who was standing next to her when Lewandowski yanked her away from Trump. “Fields stumbled. Finger-shaped bruises formed on her arm,” Terris wrote later.

The incident took place in a backstage area, as the candidate was leaving a campaign event at his club, and there was no clear video evidence of what took place until Trump’s own surveillance footage was released. Over the past two weeks, a number of brief video clips in which the protagonists were partially obscured have been debated with the kind of intensity previously reserved for the Zapruder film.

Even after the surveillance footage was released, Trump continued to defend Lewandowski on his Twitter feed, suggesting that the video showed there was “nothing there!”

Wow, Corey Lewandowski, my campaign manager and a very decent man, was just charged with assaulting a reporter. Look at tapes-nothing there!

He went on to accuse Fields of having exaggerated the extent of the contact, “before she found out the episode was on tape.” She replied that her story had simply “never changed.”

According to the Florida law cited in the police report, “battery occurs when a person: Actually and intentionally touches or strikes another person against the will of the other.” For a first offense, it is a misdemeanor, carrying a maximum sentence of one year in prison or a fine of $1,000.

The stop-motion quality of the surveillance footage makes it difficult to gauge the force with which Lewandowski pulled Fields back, but it also makes it clear that he did indeed touch her.

In a statement, the Trump campaign insisted that Lewandowski “is absolutely innocent of this charge,” and quibbled with reports that he had been arrested when he presented himself to the police and signed a Notice to Appear in court on May 4. “He will enter a plea of not guilty and looks forward to his day in court,” the statement said. “He is completely confident that he will be exonerated.”

The campaign also revealed that Lewandowski will be defended by Scott Richardson, a lawyer from West Palm Beach, and Kendall Coffey, a former United States attorney for South Florida.

Coffey was appointed to that post by Bill Clinton in 1993 but was forced to resign three years later after a Justice Department investigation into his conduct sparked by a report in the Miami Herald that he had an altercation with a topless dancer in a nightclub and bit her on the arm.

Apparently unable to leave ill enough alone, Trump later resumed his rant against Fields, suggesting that she had grabbed him and asking if he could press charges.

Victory press conference was over.
Why is she allowed to grab me and shout questions? Can I press charges? pic.twitter.com/qbW2RjkINX

Trump might have a tough time making that case in court, however, since his own video shows that Fields had her phone in one hand and the other was visible and not grabbing him.

Why is this reporter touching me as I leave news conference? What is in her hand?? pic.twitter.com/HQB8dl0fhn

Speaking to CNN later, Trump stuck to his story that Fields had grabbed him, contrary to the visual evidence, and added a new wrinkle, suggesting that the pen the reporter was holding in her hand “could have been a knife,” or “a little bomb,” apparently justifying Lewandowski’s move to pull her away from the candidate as a security measure.

Trump also says it may have “just been a pen, which is also very dangerous.”

have you even seen bourne identity

The logical inconsistency of this defense is somewhat stunning, given that Lewandowski did not tackle Fields as a suspected assassin, or report her to the Secret Service agents two feet away from him. He walked past her as though nothing important had happened, and then claimed vociferously that he did not recall even touching her.

By Wednesday morning, Trump speculated to Fox that Lewandowski had “probably, even unknowingly,” grabbed Fields in what he described as “a reflex” to protect his boss from harm. He also repeated the false claim that the reporter had initially said that she had been “forcefully thrown to the ground.”

.@realDonaldTrump: Michelle Fields was grabbing at me, so it was probably a reflex to get her away from mehttps://t.co/jMUUOrvgVG

Fields, in fact, wrote in her initial account of the incident, still available on Breitbart’s website: “I was jolted backwards. Someone had grabbed me tightly by the arm and yanked me down. I almost fell to the ground, but was able to maintain my balance.”

• Trump Concerned His Rallies Are Not Violent Enough