While incarceration rates nationwide have been on the decline after years of growth, black girls are the fastest-growing segment of the prison population. 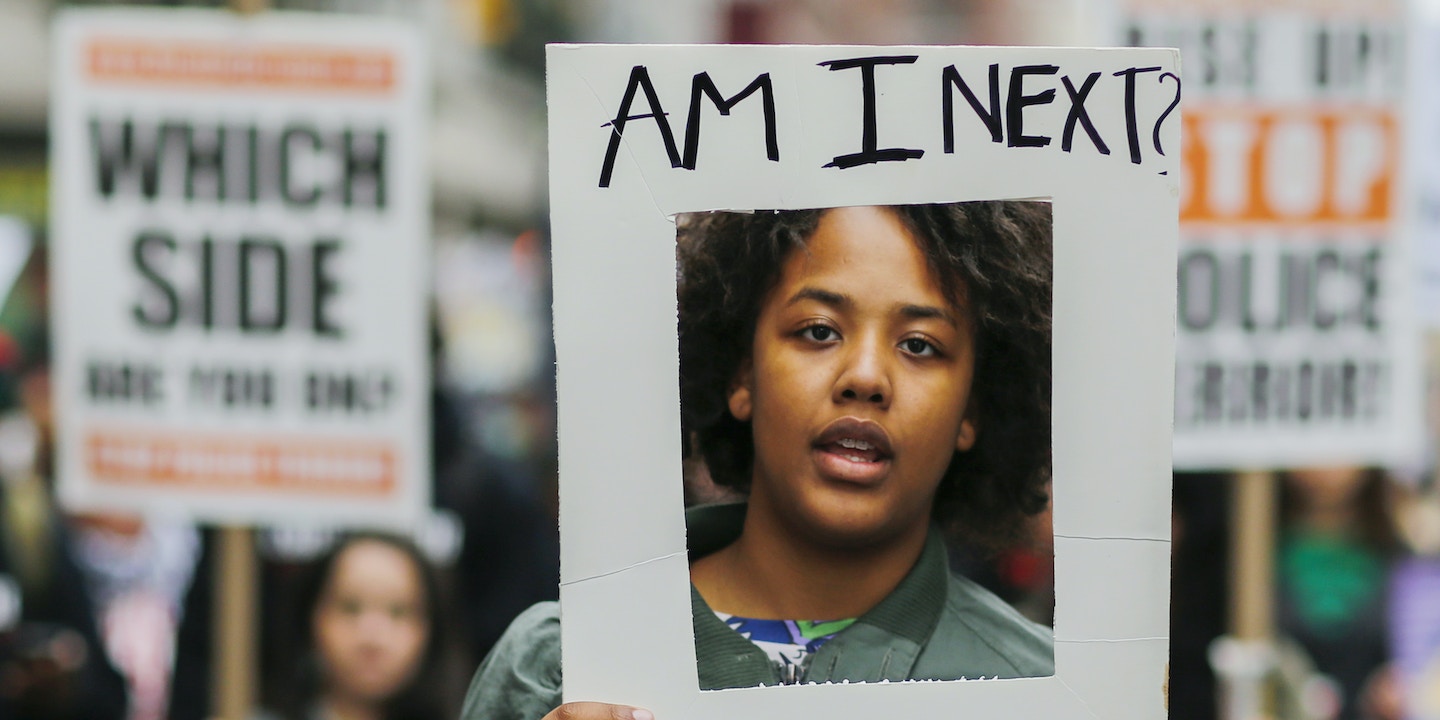 BLACK GIRLS are entering the criminal justice system in droves, many of them directly from the classroom. While incarceration rates nationwide have been on the decline after years of growth, black girls are the fastest-growing segment of the prison population, and many have been caught up in a cycle of criminalization and punishment from a young age.

Black girls represent 16 percent of female students but almost half of all girls with school-related arrests. Nationwide, they are being suspended at six times the rate of white girls — more disproportionally than black boys, who are suspended three times as often as their white peers.

But harsh school punishments and a fast track into the criminal justice system are not the only problems affecting black girls, who are also disproportionately vulnerable to extreme poverty, poor access to health care, and domestic and sexual violence. And like black men, black women are also dying at the hands of police.

Following the killings of Trayvon Martin, Michael Brown, and a seemingly endless list of black men, a growing movement for racial justice has made police accountability, the inequality of the U.S. criminal justice apparatus, and a slew of structural problems ranging from education to housing, matters of daily debate. But discussions of how such issues have specifically affected black women — who have been at the forefront of the movement for black lives — have often come in second place, just as the particular challenges black women face have often been eclipsed by fights for equal pay or reproductive rights.

Now black women are trying to change that. This week marks the second-ever Black Women’s History Week. And last week, three black congresswomen responded to an online petition by announcing the Congressional Caucus on Black Women and Girls, which will launch next month and aims to raise awareness about black women’s issues before policymakers.

“Historically, black women, while we have been leaders and foot soldiers in movements, have not been prioritized in terms of the issues that have been addressed by racial justice,” said Priscilla Ocen in an interview. Ocen, a law professor, advocate, and panelist during Black Women’s History Week, noted that the invisibility of black women’s issues is “reflective of broader patterns in the history of organizing and activism.”

The Caucus on Black Women and Girls, an initiative by Reps. Bonnie Watson Coleman, D-N.J., Robin Kelly, D-Ill., and Yvette D. Clarke, D-N.Y., is the first — after more than 430 congressional caucuses — to seek “to make Black women and girls a priority in the policy debates that occur here,” the representatives said in a release.

Like other recent efforts by legislators on racial justice issues, the caucus was prompted by a grassroots campaign by seven women who called themselves the #SheWoke committee, including activists, scholars, and the biological sister of Sandra Bland, the 28-year-old woman who was arrested during a traffic stop in Texas last summer and found dead in her cell three days later.

The group members — who initially connected through their sorority affiliation — devised the campaign when Brian Encinia, the officer who arrested Bland, was indicted for perjury in connection with the case. “We felt we should be doing more,” Nakisha M. Lewis, one of the seven and a strategist at the Ms. Foundation for Women, told The Intercept. “She could have been any one of us.”

The #SheWoke social media campaign, and this week’s #HerDreamDeferred, followed earlier attempts to bring the stories of black women and girls to the heart of the racial justice movement. #SayHerName followed Bland’s death and aimed to bring attention to the growing list of black women who have become victims of police violence. A young girl joins demonstrators marching on the first anniversary of Michael Brown’s death on Aug. 8, 2015, in Ferguson, Mo.

BLACK WOMEN’S History Week is an initiative by the African American Policy Forum, an organization that employs academic research to inform the debate over racial justice. A number of issue-based groups such as Planned Parenthood and End Rape on Campus organized this week’s events, which reflect the wide range of systemic problems that impact black women, from the challenges faced by single mothers to the pervasiveness of sexual assault.

On Monday, the week’s first panel focused on the criminalization of black girls, a disproportionate number of whom are being caught up in schools’ zero-tolerance policies and the so-called school to prison pipeline most commonly discussed in reference to black boys.

Monday’s discussion was largely based on a recent report by the AAPF that first shed light on schools’ punitive practices and their disproportionate impact on black girls. “We hear way too much about fast, sassy, defiant girls needing discipline,” Kimberlé Crenshaw, a co-author of the AAPF report, said during the panel. “The crisis facing our youth is far too critical to leave anyone behind, but to be accountable to them, we have to see them.”

Black girls have been particularly impacted by a combination of racial and gender stereotypes, and have been penalized for reasons ranging from their hair styles to a spirit of inquiry perceived as defiance. The AAPF report featured the story of a 12-year-old girl in Georgia who faced expulsion and criminal charges for writing “hi” on a locker room wall. Black girls as young as 6 have been arrested for “acting out” in class.

As these girls grow up, the problems persist. Black women are incarcerated at three times the rate of white women, largely over nonviolent drug- or property-related crimes. As is the case with girls punished in school, these women are often criminalized for behavior relating to their poverty, trauma, or history of abuse.

Crenshaw criticized the widely held assumption that “the girls are fine, let’s focus on boys.” Both black boys and black girls are disproportionately vulnerable, she said, but while initiatives like President Obama’s My Brother’s Keeper strive to support black boys, there has been no similar effort targeting girls.

“A lot of legislative attention was placed toward looking at the issues concerning black men and boys, which is obviously completely appropriate and necessary,” said Ocen, also a co-author of the report. “But at the same time, there was this invisibility around the real issues of violence and criminalization and incarceration that black women and girls were facing. … There are both similarities and differences that we should be paying attention to.”

Much needs to change at the policy level, she added, from laws that allow children to be detained over “essentially childish behavior,” to resources spent on enforcement that would be better directed toward social services.

“We should resist the impulse to punish or discipline girls but instead look at the root of the behavior,” she added. “We need to look at structural issues and not the symptoms, and see girls as children.”

Top photo: Protesters take part in a march against police brutality called “Rise up October” on Oct. 24, 2015 in N.Y.