Turkey Wants Ban on Mocking Its Leader Enforced Abroad Too

The German ambassador to Turkey was summoned to the foreign ministry in Ankara last week to explain why satirists in Germany were permitted to mock Turkish President Recep Tayyip Erdogan without sanction. 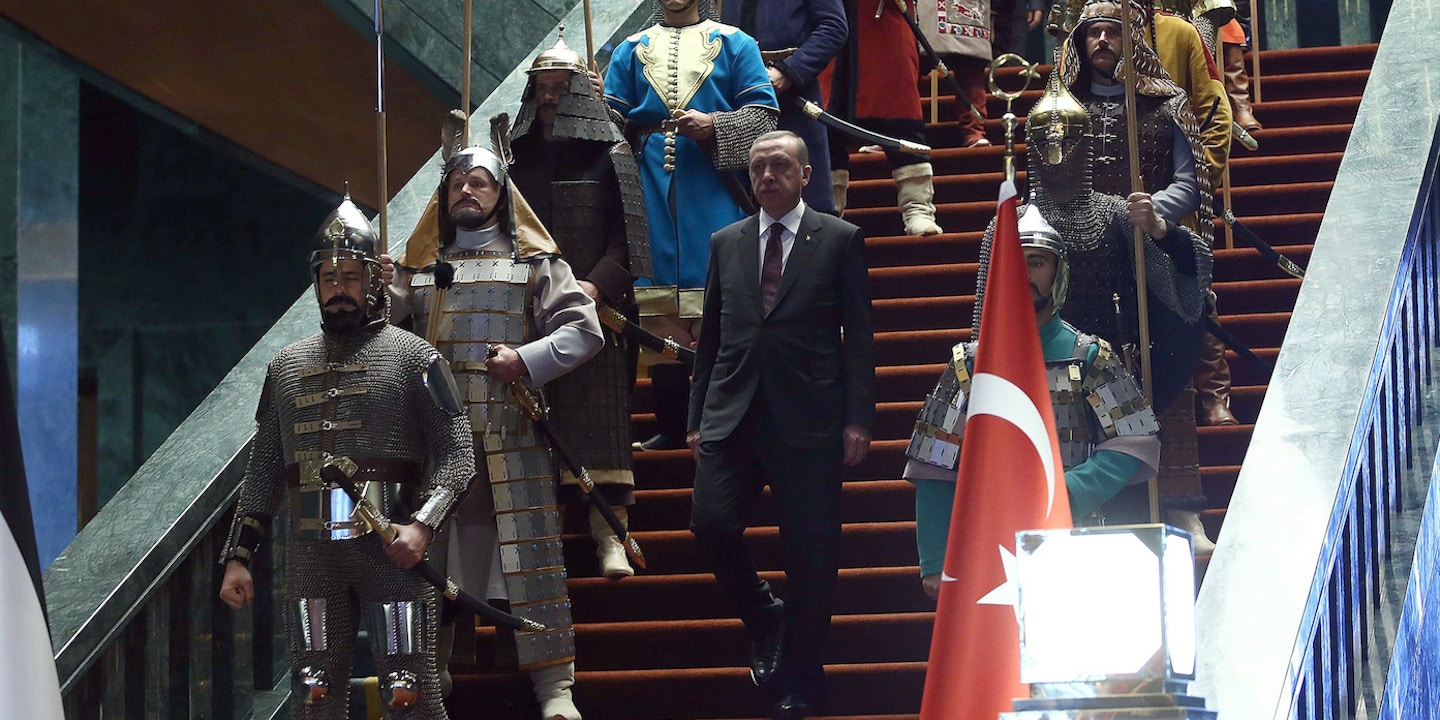 NOW THAT that Turkish President Recep Tayyip Erdogan has nearly completed a crackdown on dissent at home — closing down opposition newspapers, prosecuting students for joking on Twitter about officials, and putting journalists on trial — he seems intent on silencing critics in other countries as well.

After the president arrived in Washington on Tuesday night, his security team got right to work, harassing protesters and journalists outside his hotel, as writers for one of the papers recently shuttered by Erdogan’s government noted.

Erdogan's guards try to silence protesters in DC by shouting louder meaninglessly. A taste of Erdogan regime in USA https://t.co/J95BxkkgES

That display of intolerance for dissent followed reports this week that Turkey’s foreign ministry had summoned Germany’s ambassador to complain about a satirical music video mocking Erdogan that was broadcast recently on German television. “We demanded,” a Turkish diplomat told Agence France-Presse, that the show “be removed from the air.”

The Germany foreign ministry confirmed the encounter on Tuesday.

In his talks at Ministry of ForeignAffairs #Turkey, GER Ambassador made clear that freedom of press+speech must be secured. @GermanyinTurkey

A German diplomatic source told AFP that Ambassador Martin Erdmann rejected the request, explaining that “in Germany, political satire is covered by the freedom of the press and of expression, and the government has neither the need for, nor the option of, taking action.”

The music video that prompted the diplomatic crisis was a parody of a 1980s song by the German pop star Nena, “Irgendwie, Irgendwo, Irgendwann,” (“Anyway, Anywhere, Anytime”). The satirical remix plays on the fact that the German word for “anytime” sounds like the Turkish president’s last name. The new version of the song, “Erdowie, Erdowo, Erdogan,” broadcast March 17 on NDR, a public television channel, pokes fun at the autocratic president in part by mixing footage of him looking ridiculous with criticism of his egotism and intolerance of dissent.

In response to the Turkish demand that the video be censored, the show that produced it, Extra 3, instead added English and Turkish subtitles to the video.

Over the next 24 hours, the video was viewed nearly three million times more on YouTube, including more than a quarter of a million views of the new Turkish version.

The song’s revised lyrics explicitly cite Erdogan’s attack on press freedom. “When a journalist writes a piece that Erdogan doesn’t like,” the singer notes, “he quickly ends up in jail.”

As the German magazine Spiegel reported on Monday when it first revealed Turkey’s attempt to have the German government censor the video, Erdogan’s government has been incensed about European diplomats openly opposing its crackdown on the media.

Germany’s ambassador is one of several European diplomats to attend the trial of two senior journalists, Can Dündar, the editor-in-chief of the opposition Cumhuriyet newspaper, and Erdem Gül, the paper’s Ankara bureau chief. The two men face life in prison on espionage charges for reporting last year that weapons seized at the country’s border with Syria in 2014 were part of a covert operation by Turkey’s intelligence service to supply Islamist rebels.

“This is a tug of war between Turkish democrats and autocrats,” Dundar told the Wall Street Journal on Wednesday. “The Western world has been supporting Erdogan for years and we were telling them that this was the wrong decision, not only for Turkey, but also for the Western world.”