How the Trump Campaign Spread a Dirty Meme About Protesters Being Paid by Clinton, Sanders, and Soros

Despite a complete lack of evidence, Trump supporters have come to accept the idea that protesters who jeer their candidate are paid to do so. THREE WEEKS AGO, when Donald Trump called off a rally in Chicago because hundreds of protesters managed to crash the party, a more introspective candidate might have asked himself what he had done to inspire such loathing.

Instead, Trump seized on a more comforting explanation: The young people who refused to let him speak must have been dispatched by his rival insurgent, Bernie Sanders.

Bernie Sanders is lying when he says his disruptors aren't told to go to my events. Be careful Bernie, or my supporters will go to yours!

One of Trump’s oldest political confidants, the former Nixon aide Roger Stone, developed a far more elaborate conspiracy theory. Stone, who has advised Trump off and on for decades, and has devoted himself to spreading rumor and innuendo about Hillary Clinton for nearly as long, rushed to Twitter to share his big idea: that the protesters must have been covert operatives for the Clinton campaign, paid to both impersonate Sanders supporters and provoke violence from Trump’s fans.

. @realDonaldTrump rallies being infiltrated by agents provocateurs from the Left. Bogus demonstrators to spark violence. #notYUGE

Given that Stone began his own career by going undercover for the notorious Committee for the Re-Election of the President in 1972, it is perhaps not surprising that he thinks he sees dirty tricks wherever he looks. As Jeffrey Toobin explained in the New Yorker:

He was just nineteen when he played a bit part in the Watergate scandals. He adopted the pseudonym Jason Rainier and made contributions in the name of the Young Socialist Alliance to the campaign of Pete McCloskey, who was challenging Nixon for the Republican nomination in 1972. Stone then sent a receipt to the Manchester Union Leader, to “prove” that Nixon’s adversary was a left-wing stooge. Stone hired another Republican operative, who was given the pseudonym Sedan Chair II, to infiltrate the McGovern campaign.

The day after the canceled Trump rally, Stone found a way to present his Clinton theory to a much wider audience, giving an interview on the subject to Alex Jones, the conspiratorial radio host, that was viewed more than 300,000 times on Facebook.

Jones, a die-hard supporter of Trump who previously helped found the “9/11 Truth” movement, told his viewers that Stone had “sources inside” the covert operation who had confirmed to him that the disruption at the University of Illinois at Chicago was “a false flag.”

“These demonstrators are flying under a false banner: They are not Sanders supporters by and large,” Stone said. “This is an operation directed by supporters of Hillary Clinton, paid for by George Soros and MoveOn.”

Soros, a billionaire, is a favorite target of internet conspiracy theorists across the globe, particularly anti-Semites, since he uses his money to support activists from MoveOn.org and other civil society groups in the United States and abroad. Ken Zimmerman, director of U.S. programs for Soros’s Open Society Foundations, told The Intercept that the organization “does not fund people to take to the streets to protest against any individual, Donald Trump or otherwise.”

While Stop Trump-Chicago, a student group that used Facebook to organize the protest, acknowledged that MoveOn did offer to provide signs when it found out about the event, the demonstration “was started by students, organized by students, and led by students.”

Two days after the canceled rally, Trump fully embraced the meme anyway, telling Fox News that the demonstrators “were real professionals — and they weren’t protesters, they were disrupters. They were professional disrupters.”

Over the course of the following week, the idea that all of the dissent at Trump rallies was coming from “paid protesters” morphed into a common talking point for his supporters on social networks and cable news, even though Fox noted that the campaign produced no evidence to support the claim.

A week after the mass protest in Chicago, when a coalition of mainly Latino activists briefly blocked access to a Trump rally outside Phoenix by chaining themselves to vehicles parked across a highway, the candidate called ABC News to accuse those protesters of being “professional agitators.”

Protester with neck locked to car on main road to #StopTrump in Arizona #UnitedAgainstHate pic.twitter.com/lHaR0v4O8r

While Trump again offered absolutely no evidence for the claim, and was not asked for any, his supporters on the website 4chan set out to find some. To that end, they dug into the background of one of the three protesters arrested on the road outside Phoenix, Jacinta Gonzalez.

The Trump supporters discovered what looked to them like a smoking gun: Gonzalez had once received a fellowship from the Open Society Foundations. Apparently unaware that Gonzalez’s tangential connection to Soros — an 18-month stipend to support her work on behalf of day laborers and immigrant families in New Orleans — had ended in 2012, the 4chan group eagerly discussed how to use this information to help their man. “The Trump campaign is aware of Soros scheming,” one of the commenters wrote. “Tweeting this intel to his staff will give them even more ammo.”

It is not clear if any of their efforts to alert the Trump campaign succeeded, but a day later, Dan Scavino, the candidate’s social media director (and former caddie) triumphantly drew attention to a thinly sourced blog post on Gonzalez that incorrectly identified her as the “lead organizer” of the protest.

Like the 4chan thread, the blog post Scavino shared also included a number of other factual errors, like identifying Gonzalez as a resident of New Orleans (she now lives in Phoenix), and speculating that she might not be a U.S. citizen (she has been since birth, having been born to an American mother in Mexico).

Two days later, Stone laid out his theory again in a post for the Daily Caller, in which he also claimed to have confirmed it by “infiltrating” a rally against Trump in New York on March 19, and catching the protesters off guard. “Several admitted answering a Craig’s list [sic] ad paying $16 an hour for protesters,” Stone insisted.

This “reporting,” from a political operative who has a long track record of spreading unsourced innuendo about candidates he works against — and claims to confer with Trump at least once a week — was quickly shared on social networks as absolute proof by one of Trump’s biggest fans, Ann Coulter, and his son, Eric Trump.

BREAKING: Anti-Trump Protesters Admit They Were Hired on Craigslist – Being PAID to Protest https://t.co/eJ2MRMXyMo via @rightwingnews

Stone did not reply to requests for comment from The Intercept. 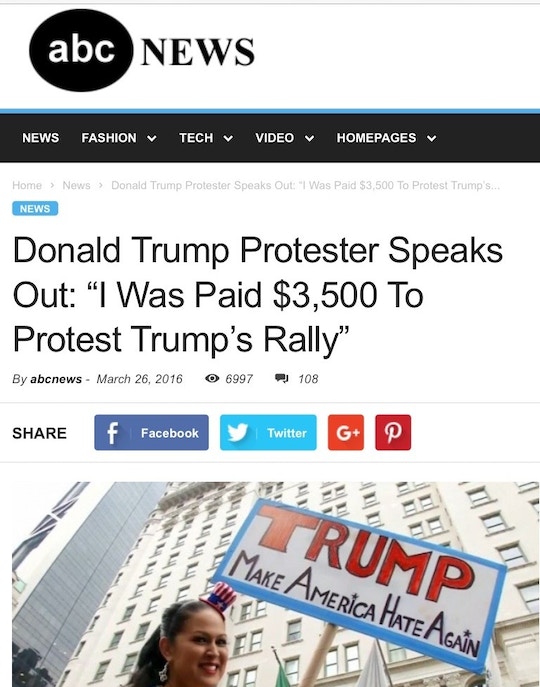 Lewandowski shared what seemed to be a report from ABC News on Twitter — only to be informed soon by other people who took the time to read the full text, and the description of the website, that it was a hoax — it was not from ABC News at all, but a website with a URL that was similar to it.

Like Ann Coulter, who also shared the hoax report, Lewandowski later deleted his tweet, but not before it had already been shared hundreds of times.

The fake news report was written by a well-known internet prankster, Paul Horner, whose work in that genre has earned him millions of readers, tens of thousands of dollars, and a profile in the Washington Post.

Horner, who actually attended the protest outside Phoenix, took all the essential elements of Stone’s theory and wove them into a fictional news report, even creating this fake Craigslist ad as “evidence.”

A fake Craigslist ad created by an internet prankster.

Then last week, Scavino drew attention to another Craigslist ad, supposedly offering $15 an hour “to protest the Donald Trump rally in Janesville, Wisconsin.”

That ad, which was later removed from Craigslist, looked like a prank too. As users on Reddit pointed out, the address listed as the meeting place “for pre-protest instructions and to get your time card,” was 3300 West Tripp Road in Janesville, which is the local wastewater treatment plant, more than 10 miles from the site of Trump’s rally.

Despite the likelihood it was another fake, several conservative websites, including Glenn Beck’s The Blaze and Alex Jones’s InfoWars reported on it as if it were genuine proof of Stone’s theory, based merely on the Trump aide’s tweet.

Stone himself then tweeted a link to one of the reports on the deleted Janesville ad, which also cited his own Daily Caller column as evidence that such things were happening.

Ironically, reporters have been able to identify only one instance of actors being paid to attend a campaign rally. That was Trump’s announcement of his own candidacy, for which, the Hollywood Reporter discovered, a casting agency in New York had put out a call for “background actors” willing to “wear T-shirts and carry signs and help cheer him in support of his announcement.”

That report, backed up by the full text of an email sent to actors, in turn inspired a Simpsons parody of the announcement, in which Homer was hired to be part of the rent-a-crowd.