Countries worldwide may lose about $200 billion per year due to tax evasion and another $130 billion due to tax avoidance. READING THE many stories based on the giant leak of documents from Panamanian law firm Mossack Fonseca — notorious for its prolific creation of shell companies to hide assets of wealthy malefactors — you might well ask: How much tax revenue do the world’s governments lose thanks to this kind of financial engineering?

According to The Hidden Wealth of Nations, a recent book by University of California, Berkeley economist Gabriel Zucman, the answer is that tax evasion costs governments approximately $200 billion per year.

Zucman also estimates that tax avoidance by U.S. corporations — which, unlike tax evasion, is generally carried out in the open and is technically legal — costs governments an additional $130 billion per year. (European and Asian corporations have the same incentives to avoid taxes, but there is not enough data to estimate its scale.)

So as a result of all the different schemes like the ones being unveiled by the Mossack Fonseca leak, governments around the world are dealing with at least a one-third of a trillion dollar annual shortfall that must be made up by cutting spending, borrowing, or taxing the rest of us more than they should.

To understand how this works, read this article about Uganda based on the Mossack Fonseca leak. According to Times Live of South Africa, in 2010 the Heritage Oil and Gas Ltd Company wanted to avoid paying $404 million in capital gains taxes to the Ugandan government on its $1.5 billion sale of its 50 percent interest in Uganda’s oil fields. So it enlisted Mossack Fonseca to help it quickly change its official corporate home to the tiny island of Mauritius, where it could avoid Ugandan taxes.

This behavior was both par for the course for multinational corporations and extraordinary egregious — $404 million is considerably more than the government of Uganda’s entire annual health budget.

Uganda eventually collected on the tax bill, thanks to what sounds like heroic efforts by unusually honest government officials. But most countries aren’t so lucky.

Zucman’s estimates on tax evasion and avoidance are straightforward.

His reasoning is that the world’s assets should be an exact mirror image of its liabilities, but are not. If the U.S. sells $1,000 in government bonds to a foreigner, that $1,000 liability for the U.S. should show up as $1,000 in assets for the foreigner’s country. However, countries’ national balance sheets record much more in liabilities than assets.

This phenomenon is due to the financial engineering industry. As Zucman explains, imagine that a British citizen holds Google stock via a Swiss account. The U.S. correctly records that stock as a liability: A foreigner owns U.S. stock. Switzerland correctly does not record it at all, since the stock is not a liability nor asset of Swiss citizens. But the U.K. incorrectly fails to calculate it as an asset of the British citizen.

Thus, Zucman writes, it is “as if Planet Earth were in part held by Mars.” 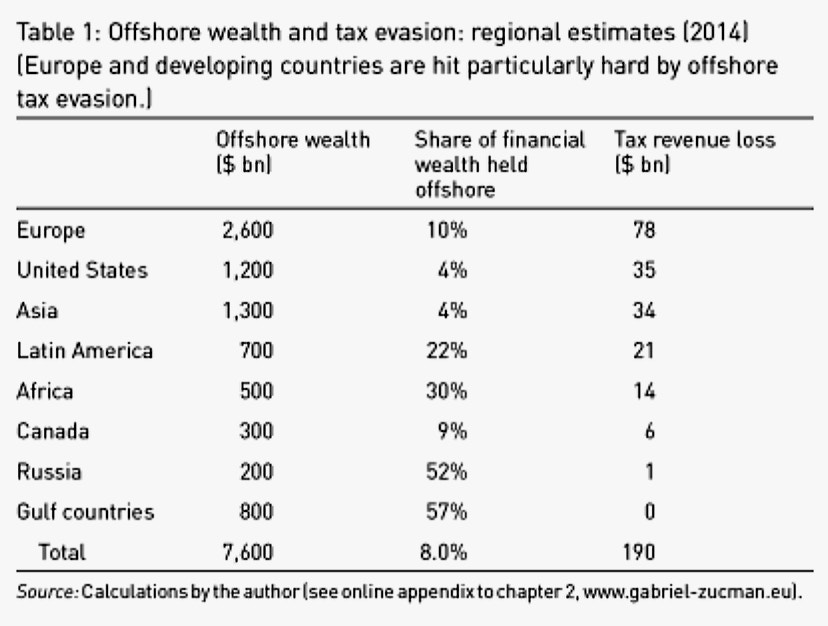 Table from “The Hidden Wealth of Nations” by Gabriel Zucman.

Zucman then calculates, generalizing from the behavior of those with Swiss bank accounts, that about 20 percent of the $7.6 trillion is voluntarily declared by its owners when they pay taxes. That leaves $6.1 trillion.

Zucman estimates that $125 billion in worldwide taxes should have been paid on the interest and dividends generated by that $6.1 trillion. To that he adds $55 billion in estate taxes, and $10 billion in wealth taxes, for the total of $190 billion.

As he acknowledges, this $190 billion is only about 1 percent of the revenue raised each year by governments worldwide. However, some regions have seen far more of their wealth moved offshore than others: While only 4 percent of the wealth of the U.S. and Asia is held offshore, 10 percent of Europe’s is offshore, as is 22 percent of Latin America’s, 30 percent of Africa’s, and 52 percent of Russia’s.

In terms of tax avoidance, Zucman points out that about a third of U.S. corporate profits, or $650 billion, are purportedly earned outside the country. Corporate tax lawyers use accounting tricks to make 55 percent of this $650 billion bogusly appear to have been generated in six low- or zero-tax countries: the Netherlands, Bermuda, Luxembourg, Ireland, Singapore, and Switzerland. According to U.S. law, the corporations don’t have to pay our corporate tax rate of 35 percent until the profits are brought back to the United States, so the profits generally stay overseas. However, if those profits did come home and were taxed at the proper rate, the U.S. corporate tax bill would be about $130 billion higher per year.

Thus tax evasion is most costly for the regular citizens of Russia, Latin America, and Africa. Meanwhile, while it’s impossible to calculate precisely, Americans and Europeans pay more of the burden of American corporations’ tax avoidance.

Top photo: View of a sign outside the building housing the offices of Panama-based law firm Mossack Fonseca in Panama City, on April 4, 2016.