Public massacres are hard to talk about, not just because they are frightening and unpredictable, but because we just don’t know that much about them. STRIP MALLS, MOVIE theaters, schools, grocery stores — the images in Speaking Is Difficult, the new film by Field of Vision co-creator AJ Schnack, are ordinary but serene. Wherever we live, these are the places where we routinely expose ourselves to the wider world. The film punctures this calm familiarity with grainy audio documenting past traumas. The details we can ascertain from these 911 recordings are sparse — a white male shooter, an unknown number wounded — but we all know how to fill in the blanks. In one sense, we’ve seen this movie before.

As the title suggests, these public massacres are hard to talk about. This is not just because they are frightening, horrific, and unpredictable, but also because in empirical terms we just don’t know that much about them. “There is a dearth of comprehensive, authoritative data on multiple-victim homicide incidents, either committed wholly or partially with firearms,” the Congressional Research Service lamented in its July 2015 report on what have recently become known as “mass shootings.” Given all that we don’t know, how can we hope to answer Gabrielle Giffords’s call to action at the end of Speaking Is Difficult, to prevent the kind of killing that very nearly took her life?

“Speaking Is Difficult,” a new film by AJ Schnack.

As the CRS was preparing its report, amateur researchers, frustrated by the lack of information about these seemingly regular massacres, began to take matters into their own hands. In the first major real-time effort to compile a record of every mass shooting in the United States, a group of anti-gun Reddit users found that these events occurred once per day, on average, in 2015. The Washington Post picked up their findings in August, and for the rest of last year major news outlets ran headlines declaring that mass shootings were happening every day in the United States.

But was it true? That depends on how you define “mass shooting.” Because these researchers counted any event in which four or more people were shot, the vast majority of their database entries appear conceptually distinct from the largely random public killings documented in Speaking Is Difficult. They include armed robberies, gang shootouts, and familicides. As of the end of last year, shootings in private residences accounted for more than two-thirds of the entries, and the majority of cases involved the murder of a family member or intimate partner. Very few of the shootings made the national news.

For the past three years, researchers at Mother Jones have been maintaining a more precise database of mass shootings in the United States, one that uses a number of criteria to exclude the huge majority of cases involving domestic violence, gang activity, and other interpersonal conflicts. As of March 2016, they have identified 75 mass shootings since 1982. That 34-year total is less than a quarter of the number news outlets regularly claimed were occurring in 2015 alone.

While this lower figure might seem to deflate claims that mass shootings in the United States are on the rise, a statistical study of the Mother Jones database by a team of researchers from Harvard’s School of Public Health found otherwise. Their analysis determined that although the frequency of public mass shootings remained relatively steady for almost 30 years beginning in 1983, the frequency tripled in 2011, from an average of once every 200 days to once every 64 days. Given this finding, recent media pronouncements that we live in an “age of mass shootings” do not seem so far fetched.

Although the Mother Jones dataset provides some evidence for the previously inchoate sense that these public shootings constitute a kind of epidemic, it does not bring us much closer to understanding how we might prevent such massacres. The statistical method used by the Harvard researchers assumes that some underlying process is responsible for the frequency of shootings, and the point is to correlate the moments when the frequency changes — in this case, late 2011 — with real-world events that may have caused the change. For example, a point in time at which a certain surgical error becomes less frequent can be correlated with the introduction of a new sterilization method.

But is it possible to identify an underlying process responsible for America’s mass shootings? The Harvard researchers themselves acknowledge that the number of potential variables in play makes answering this question nearly impossible, at least for now. However their findings do allow them to cast aspersions on some popular explanations for the rise of mass shootings, given that there were no widespread changes to mental health or access to guns in late 2011, when the frequency of shootings tripled. For these and other reasons, the researchers are skeptical that universal background checks would be a decisive deterrent. And research shows that a renewed assault weapons ban would have almost no discernible impact. Psychological profiling does not get us much further. While mass shooters tend to be white, male, and alienated, those traits in combination produce so many false positives that they have no predictive value. 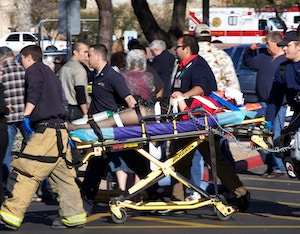 Emergency personnel move former Rep. Gabrielle Giffords after she was shot outside a shopping center in Tucson, Ariz., on Jan. 8, 2011.

But before we despair that we cannot answer Gabrielle Giffords’s plea, we would do well to situate mass shootings within the larger context of gun violence in the United States. Even among gun homicides that leave four or more dead, public shootings were outnumbered by both familicide and felony-related shootings by a 2-to-1 margin in the years 1999 through 2013. Altogether, more than 30,000 Americans die annually from gun violence. While about 30 of those victims (0.1 percent) typically die in the high-profile public massacres covered by major news outlets, over 20,000 take their own lives. Of the remaining roughly 10,000 annual gun homicide victims, the majority probably knew their killer. In short, there is plenty of other gun violence for us to worry about.

Gun control opponents will point out that aggregate gun violence has declined precipitously (along with all violent crime) since a peak in the early 1990s, but that doesn’t change the fact that levels of gun violence are higher in the U.S. than in any other developed democracy. To make sense of this fact, it helps to consider the possibility that the U.S. doesn’t have a single “gun violence problem” but instead has a constellation of interrelated but distinct gun violence problems. When we disaggregate the sobering figures above, the patterns that emerge suggest policy solutions that could save thousands of lives.

It’s often noted that black men, who account for 6 percent of the U.S. population, account for half of U.S. gun homicide victims. But this figure itself obscures much more specific phenomena. Sociological research indicates that the murders in black communities are largely concentrated not simply in particular urban neighborhoods, but even on particular blocks and within a small number of generally identifiable social networks. (In other words, this is hardly the conservative moralist’s fantasy of a monolithic “black-on-black crime.”) As a consequence, our ability to predict the perpetrators, victims, and locations of everyday urban gun violence is miles ahead of our ability to predict the public massacres that make national headlines. Cities like Boston, Indianapolis, and Lowell, Massachusetts, saw precipitous drops in gun homicide when they embraced a strategy known as “focused deterrence,” which harnesses this predictive power to stage community interventions targeted at those most likely to be involved in gun violence.

Another type of gun violence that we understand well enough to stage specific interventions against is violence against women. In the U.S., women are 11 times more likely to be shot and killed than their counterparts in other high-income countries. These murders typically occur at the hands of a family member or intimate partner. A robust body of research demonstrates that guns are a significant risk factor for homicide in domestic violence incidents, where the presence of a gun is 500 percent more likely to result in a homicide than one without. Legislative measures that take guns out of the hands of known abusers and stalkers could end America’s shameful rate of femicide.

State officials from both political parties are beginning to recognize that limiting firearm access in high-risk situations can save lives. Over the past few years, more than a dozen states have passed measures tightening gun prohibitions on known stalkers and abusers — and the normally intransigent National Rifle Association has often cooperated. The recent success in this arena shows that policies targeted at very specific types of gun violence, rather than gun violence generally, can sidestep the insurmountable opposition that reliably defeats more universal gun control efforts in Congress. The success of the earliest “focused deterrence” efforts targeted at urban gun homicide in specific cities likewise demonstrates the political and practical benefits of local, targeted interventions. Speaking about the trauma of gun violence is difficult. Ending gun violence, in its many forms, doesn’t have to be.

Top photo: Law enforcement officials display crime scene photographs during a press briefing at the Inland Regional Center on Dec. 2, 2015, near the scene of a mass shooting that left 14 people dead.