Obama once called for “the arms merchants in our own country [to] stop feeding the countless wars that rage across the globe.” Now he enables them. 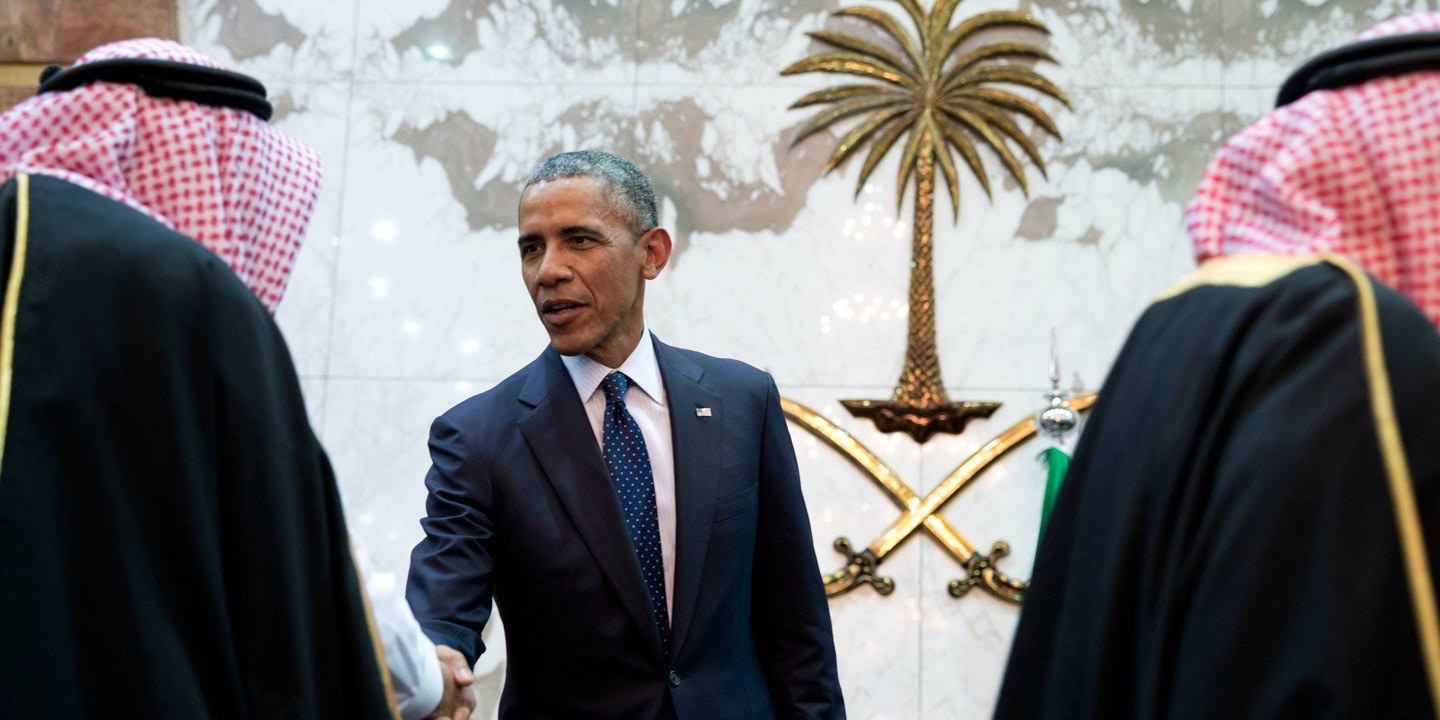 In the 2002 speech against the Iraq War that helped propel him to the presidency, then-state Sen. Barack Obama denounced not just the looming invasion of Iraq, but also human rights abuses by our “so-called allies” in Saudi Arabia:

Let’s fight to make sure our so-called allies in the Middle East, the Saudis and the Egyptians, stop oppressing their own people, and suppressing dissent, and tolerating corruption and inequality, and mismanaging their economies so that their youth grow up without education, without prospects, without hope, the ready recruits of terrorist cells.

And he spoke out against the U.S.’ role as weapons supplier to the world:

Let’s fight to make sure … that the arms merchants in our own country stop feeding the countless wars that rage across the globe.

Thirteen years later, Obama is making his fourth trip to Riyadh, having presided over record-breaking U.S. arms sales to Saudi Arabia while offering only muted criticism of the kingdom’s human rights violations.

And don’t expect the president to speak up while he’s there. Obama last traveled to Saudi Arabia in January 2015, cutting short his trip to India after the passing of the former Saudi king, Abdullah ibn-Abdulaziz al-Saud. During that visit, Obama was criticized for not speaking out against the flogging of prominent Saudi blogger and dissident Raif Badawi. In 2014, Badawi was sentenced to 10 years in prison and 1,000 lashes for “insulting Islam” and “going beyond the realm of obedience,” with the first flogging session taking place weeks before Obama arrived.

In January, after a record-setting year for Saudi beheadings, Saudi authorities set off protests by executing Shia cleric and regime critic Nimr al-Nimr. U.S. response was muted. The State Department merely said the execution “risks exacerbating sectarian tensions at a time when they urgently need to be reduced” — and then fell silent on the repression of the following protests.

Last year, amazingly enough, Saudi Arabia became the head of the 47-member U.N. Human Rights Council. When a State Department spokesperson was asked for his reaction, he responded: “Frankly, we would welcome it. We’re close allies.”

Obama administration officials have not offered on-the-record explanations for why Saudi human rights abuses don’t play a greater role in U.S. policy. But in the trove of documents released from former Secretary of State Hillary Clinton’s private email server, Clinton acknowledges that the U.S. government holds the Saudis to a different standard.

In one email chain, dated June 22, 2011, aide Cheryl Mills forwarded Clinton a New York Times opinion column in which Maureen Dowd mused that it would “have been thrilling” if Clinton, on a recent trip to Saudi Arabia, had “smacked around the barbaric Saudi men who force women to huddle under a suffocating black tarp.” Clinton asked Mills what she thought about the column and Mills remarked that “we/DOS/USG may have different standards we apply when it is pushing Saudi.” “No doubt about that!” Clinton responded:

Obama’s visit this week will be taking place in the shadow of an ongoing U.S.-supplied, Saudi-led campaign in Yemen, where Saudi airstrikes have killed thousands of civilians.

Since the Saudi coalition began its campaign last March, it has relied on U.S.-produced aircraft, “smart bombs,” guided missiles, and internationally banned cluster bombs. A recent report from Human Rights Watch, for instance, found evidence that the coalition used American bombs in a March 15 attack on a market in northwestern Yemen where nearly a hundred civilians were killed. As Iona Craig reported in November, Yemen’s architectural history is also being destroyed by bombs sold to Saudi Arabia by the United States.

According to a new poll released earlier this month, 82 percent of Yemenis between the ages of 18 and 24 now view the United States as an enemy.

On Wednesday, Sen. Chris Murphy, D-Conn., and Sen. Rand Paul, R-Ky., introduced a bill blocking arms transfers unless the State Department certifies that the Saudi military is taking every “feasible precaution to reduce the risk of harm to civilians.”

But arms sales in general — and specifically to Saudi Arabia — have been a consistent element of Obama’s tenure.

“Many Americans would be surprised to learn that his administration has brokered more arms deals than any administration of the past 70 years, Republican or Democratic,” said William Hartung, a senior adviser to Secure Assistance Monitor, a progressive group that tracks arms sales.

The primary vehicle for international arms transfers is the Pentagon’s Foreign Military Sales (FMS) program; in 2015, the FMS program hit a record high of $46.6 billion.

The Saudis have been major clients. “During the first six years of the Obama administration, the United States entered into agreements to sell over $190 billion in weapons and training to Saudi Arabia. And in 2015, the administration announced its intention to sell another $22 billion to the kingdom, parts of which have yet to be embedded in formal agreements,” Hartung said.

To put that in context, in his first five years as president, Obama sold $30 billion more in weapons than President Bush did during his entire eight years as commander in chief.

Saudi Arabia maintains a huge network of D.C. lobbyists, public relations experts, and a subsidized think tank to promote its cozy relationship with Washington. And as Lee Fang reported in December, it launched a particularly massive new charm offensive shortly after beginning its air and ground assault in Yemen.

Murphy expressed hopes that Obama would press the Saudi king on his conduct in Yemen. “Right now, the Saudis’ focus on Yemen is distracting them from the war against violent extremists,” Murphy said in a statement emailed to The Intercept. “And personally, I hope President Obama takes this opportunity to have a frank discussion with Saudi Arabia about their continued backing for religious and educational institutions around the world that promote sectarianism and intolerance.”

But many activists are losing hope that the U.S. relationship with Saudi Arabia will change.

“The reality is the U.S. foreign policy establishment, including the State Department and Pentagon, are happy with the Saudi relationship,” said Stephen McInerney, executive director of the Project on Middle East Democracy. “In order to change course, meaningfully, it would take real leadership and investment in doing so, and President Obama — although his instincts might be that the Saudis are problematic in a number of ways — he hasn’t shown any serious desire to bring about a change of policy.”