How a Simple Request Got Me Blacklisted by the Pentagon

Military officials stopped answering a reporter’s emails and calls about overseas bases, so he filed FOIA requests. The Pentagon was not pleased. 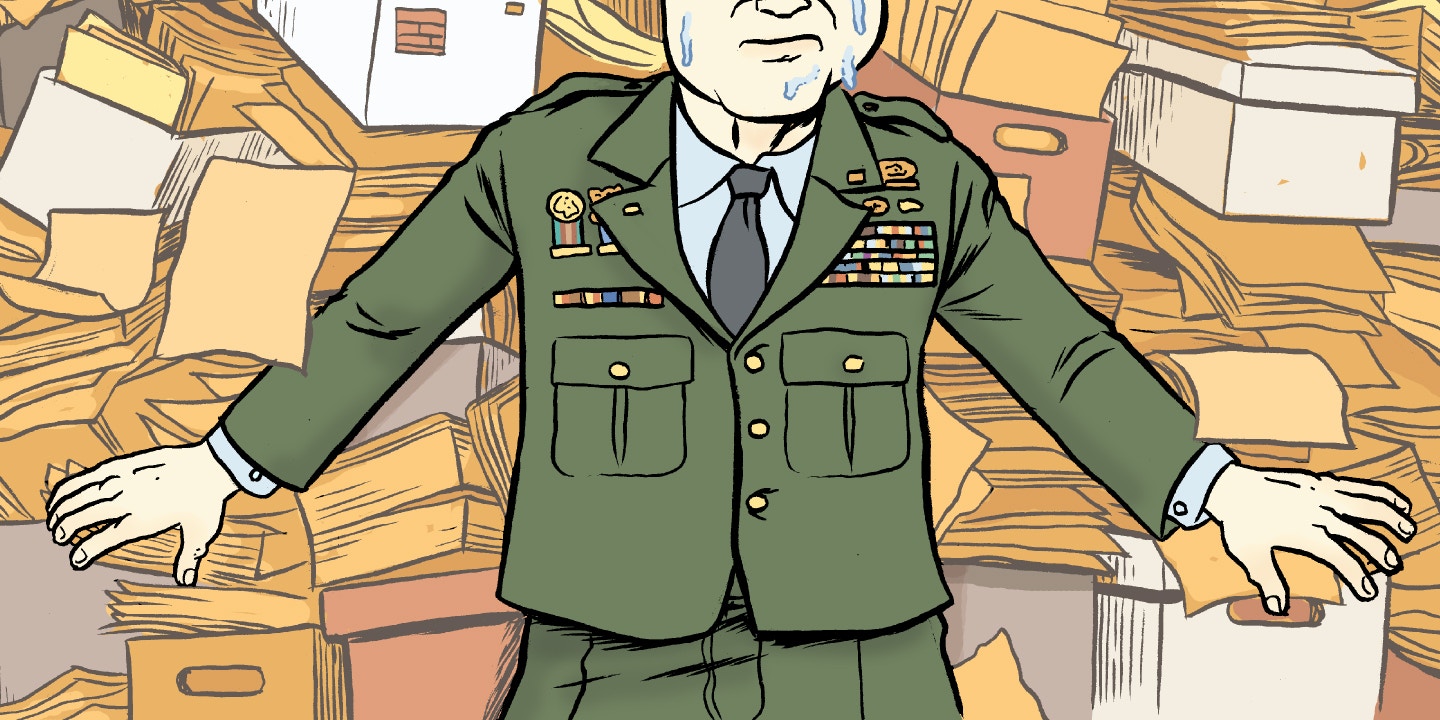 The Department of Defense has a lot of problems — a series of wars in Iraq that never seem to fully end, a conflict in Afghanistan that just won’t end, quasi-wars in Pakistan and Yemen and Somalia with no end in sight; a proliferation of terror groups around the globe; and its numerous failed, failing, and scuttled training efforts to create local proxy armies.

And then there’s me.

Last week, the Department of Defense issued its annual “Chief Freedom of Information Act Officer Report to the Department of Justice.” At a cost of roughly $41,449, this study, according to the Defense Department’s chief FOIA officer, Peter Levine, found that “DOD has continued to improve its administration of the FOIA and develop new initiatives to further streamline our FOIA processes and promote openness and transparency.” Never mind that, at this very moment, the Defense Department is seeking to add exemptions to the Freedom of Information Act that would allow it to deny requests for unclassified materials pertaining to military operations. The report suggests that sunshine is abundant at the Pentagon — even if there are some conspicuous traces of gloom beyond their control.

The report, for instance, laments that “despite their best efforts to provide helpful details, great customer service and efficient responses,” some DOD components were “still overwhelmed by one or two requesters who try to monopolize the system by filing a large number of requests or submitting disparate requests in groups which require a great deal of administrative time to adjudicate.” The study went on to call out:

Who would do such a thing? What type of monster files this many requests?

That would be me.

The chief FOIA officer’s report seems to suggest intent, that I file FOIA requests in an attempt to “monopolize the system.” That’s presumably the reason that I’m responsible for 43 percent of AFRICOM’s FOIA requests. 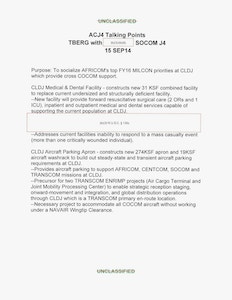 Of course, Levine — who also serves as the DOD’s deputy chief management officer — never asked me my reasons. If he had, I would have offered a different explanation, one that begins back in July 2012 with my request to Col. Tom Davis, director of U.S. Africa Command’s Office of Public Affairs, for some basic information about what AFRICOM calls “temporary facilities” — what you and I might refer to as American bases on the African continent.

Col. Davis turned out to be on leave at that moment, but AFRICOM spokesperson Eric Elliott emailed the next month to say: “Let me see what I can give you in response to your request for a complete list of facilities. There will [be] some limits on the details we can provide because of the scope of the request.”

That, it turns out, was an understatement.

For weeks, I heard nothing. A follow-up email in late October went unanswered. A message in early November finally elicited a reply by another AFRICOM spokesperson, Lt. Cmdr. Dave Hecht, who said he was now handling the matter and would provide an update by the end of the week. He didn’t. I sent another email. On November 16, Hecht finally responded: “All questions now have answers. I just need the boss to review before I can release. I hope to have them to you by mid next week.” Did he? Nope. Further emails went unanswered. It was December before Hecht replied: “All questions have been answered but are still being reviewed for release. Hopefully this week I can send everything your way.”

Guess what? He didn’t.

In January 2013, I received answers to some other questions of mine, but nothing in regard to U.S. bases. By now, Hecht had also vanished and I was handed off to AFRICOM’s then-chief of media engagement, Benjamin Benson. When I asked about the ignored questions, he responded that my request “exceed[ed] the scope of this command’s activities, and of what we are resourced to research and provide under the Public Affairs program.” He suggested that I instead file a Freedom of Information Act request. That is, after six months of waiting for some very basic information and being led to believe something along those lines would be provided, he recommended I begin a new endlessly drawn-out process. I dutifully did. This January, I finally received a partial response to that FOIA request. After 3 1/2 years of waiting for this information, I received one page of unclassified but still partially redacted (not to mention relatively useless) material about the only officially acknowledged U.S. base in Africa. If you can believe it, that six-month span in 2012 and 2013 may represent the highpoint of my relationship with AFRICOM. They at least returned my emails and phone calls, if not always in a timely manner. At some point afterward, they mostly stopped picking up the phone. I made, for instance, a couple hundred attempts to contact the command for information, comment, and clarification while working on an article about criminal acts and untoward behavior by U.S. troops in Africa — sexual assaults, the shooting of an officer by an enlisted man, drug use, sex with prostitutes, a bar crawl that ended in six deaths. Dozens of phone calls to public affairs personnel went unanswered, countless email requests were ignored. At one point, I called Benson, the AFRICOM media chief, 32 times on a single business day from a phone line that identified me by name. He never picked up. I then placed a call from another number so that my identity would be concealed. He answered on the second ring. Once I identified myself, he claimed the connection was bad and the line went dead.

With that kind of “assistance” from AFRICOM, I had to write almost that entire piece from — you guessed it — documents obtained via the Freedom of Information Act. In fact, it took dozens of requests and more than a year’s worth of effort to obtain the documents for that single article. Of course, investigations like that didn’t win me any friends at AFRICOM.

Today, when I write to the current AFRICOM public affairs chief, Lt. Cmdr. Anthony Falvo, I receive similar treatment. I often get a return receipt back that tells me my email to him “was deleted without being read.” This happened to me, for example, on Thursday, September 10, 2015; Friday, October 2, 2015; Tuesday, October 6, 2015; Thursday, November 5, 2015; Friday, November 27, 2015; Wednesday, February 10, 2016 … you get the picture. When I wrote a piece on a shadowy African drone base for The Intercept, not only did AFRICOM refuse to respond to me about it, they refused to even respond to a Pentagon press officer who passed along to them my requests for comment.

All this is to say that there’s a reason why I file so many FOIA requests with AFRICOM and it has nothing to do with a diabolical dream of “monopoliz[ing] the system.” It instead has to do with AFRICOM’s press office not only withholding basic information, but refusing to respond to my requests. (Or even the Pentagon’s!)

Lest I give the false impression that AFRICOM is some outlier in an otherwise open and transparent Defense Department, let me offer another example of the Pentagon’s stranglehold on information and the need to file many FOIA requests. In his preamble to the 2016 DOD FOIA report, Levine boasted that a “continued commitment to the principles of openness was showcased” by the fact that “over 91 percent of all received requests were processed in less than 100 days.” Elsewhere the report says, “The vast majority of requesters are seeing their cases resolved in less than 20 days.”

Let’s just say this often hasn’t been my experience. On the very day I first read the 2016 FOIA report, I opened a freshly delivered envelope from the Defense Department’s Inspector General. It contained 16 pages of documents, some so heavily redacted that little of substance remained. I couldn’t actually recall filing a FOIA request for the IG report, so I took a look at the cover letter and realized the reason why. It read: “Dear Mr. Turse, This is a response to your October 6, 2011 Freedom of Information Act (FOIA) request …” It had been more than four years since I sought the documents. I guess it’s a good thing I had other FOIA requests in the pipeline and wasn’t waiting on that one report for a story.

I should offer a caveat when it comes to my identity as the “one particular requester” singled out in the DOD’s 2016 report. I can’t be absolutely sure it’s me. Vice’s Jason Leopold thinks so, and given his expertise on anything related to the Freedom of Information Act — a government official has described Leopold as a “FOIA terrorist” — I wouldn’t doubt him on anything related to the subject. But, I’m really only 99.8 percent sure.

To be absolutely certain, I tried to ask Peter Levine. I was hoping he would confirm and maybe answer a couple more questions about the report. I went to the website of the DOD’s Office of the Deputy Chief Management Officer and found that it says, “Members of the press/media should directly contact the Department of Defense Press Operations Center.” So I called there asking for Levine’s number. The press officer instead said he would connect me with a colleague best suited to field my request. Unfortunately, that gentleman wasn’t in. In his absence, it was recommended that I contact Lt. Col. Eric Badger (I kid you not). I left a message and never heard back from him before I filed this piece. I guess that means I’m left with only one option. It’s time for this “one particular requester” to file another FOIA request.