Beyond Schadenfreude, the Spectacular Pundit Failure on Trump Is Worth Remembering

A collective error of this magnitude requires some serious self-examination. 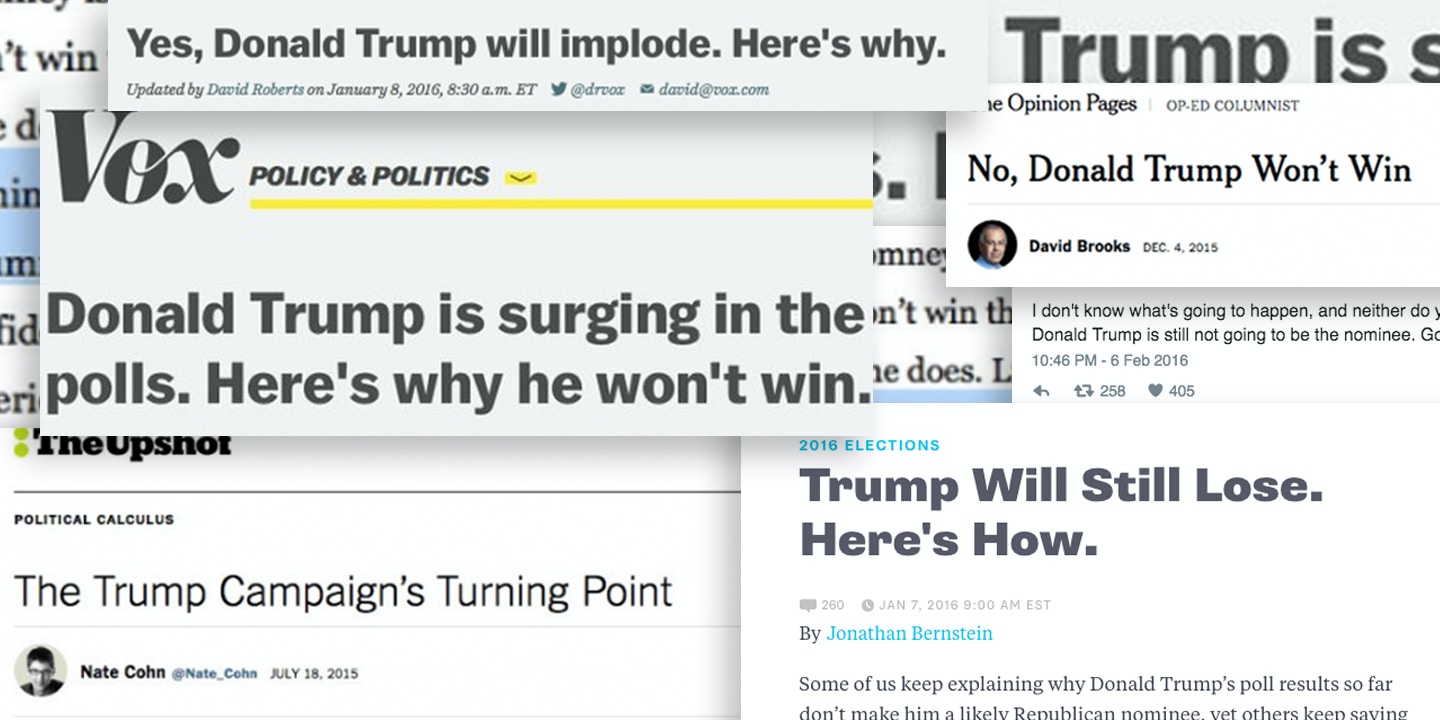 Trying to predict the future can be fun, which is why — from office sports pools to stock market speculation — many do it. Generally, though, people make such predictions with at least some humility: with the knowledge that they do not actually know what the future holds.

But not America’s beloved political pundits. When they pronounce what the future has in store for us, it comes in the form of definitive decrees, shaped with the tone of authoritative certainty. With a few exceptions, those who purported to see the future of the 2016 GOP nomination process spent many months categorically assuring everyone that, polls notwithstanding, Donald Trump simply could not, would not, become the GOP nominee; one could spend all day posting humiliating examples, so a representative sampling will have to suffice: 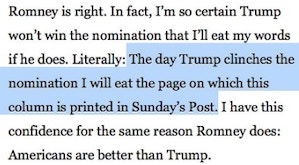 The entire commentariat is going to feel a little silly when Marco Rubio wins every Republican primary.

I don't know what's going to happen, and neither do you. But Donald Trump is still not going to be the nominee. Goodnight. By itself, the intense schadenfreude makes it genuinely hard to get oneself to stop posting these (there were at least a dozen others gathered by Twitter commentators such as @blippoblappo — excellent all — that we forced ourselves to omit). But if one can tear oneself away from the sheer joy of wallowing in this festival of fantastic failure, there are several substantive points worth making:

First, ponder the vast amount of journalistic energies and resources devoted to trying to predict election outcomes. What value does that serve anyone? The elections are going to be held and the outcome will be known once the votes are counted. Why would journalists decide that it’s important for the public to hear their guesses about who will win and lose? One can, I suppose, recognize the value of having a couple of outlets with actual statistical experts offering empirical-based analysis of polling data (although Nate Silver’s 538 fared no better when it came to Trump, in August putting his chances of winning the nomination at 0 percent, 2 percent, and minus 10 percent), but why do so many political pundits feel a need to spend so much time pronouncing which candidates will or won’t win?

I asked that question this morning and Matt Yglesias of Vox — which offered lots of definitive pronouncements about the 2016 campaign, many hideously wrong — replied: “(a) it’s fun to try (b) people like to read it.” Both of those claims are probably true (I’d add: Election predictions are incredibly easy to spout). But that only answers the question of why so many journalists do it, not what the journalistic value is.

There seems to be none, accompanied by at least two significant harms: (1) these predictions create narratives about winners and losers, thus covertly trying to dictate election outcomes under the guise of “predicting” them; and (2) there’s an opportunity cost to all journalistic choices: Flooding the zone with horserace chatter means less time, energy, and resources for substantive coverage.

Second, pundits who issued such definitive, hubristic certainties — that turned out to be totally, fundamentally wrong — owe some self-accounting and a serious self-analysis about how and why they went so wrong. To their credit, some — such as Silver and Brooks — have started to do that, but many of them have done little beyond cursory acknowledgements of error, if that. If they really believe that there’s some sort of value in issuing these prognostications, then there must be even more value in exploring what they failed to comprehend — especially since they would undoubtedly expect credit as visionaries and oracles if they had been right.

Third, there are — and we’re far from the first ones to note this — some serious problems in political journalism reflected by this insistent, pervasive belief that Trump could not possibly win (the belief that Clinton would waltz to the nomination without any serious challenge reflects a similar problem). Influential journalists live much different lives from the mass of voters on whose behalf they think they can speak — or, at least, whose thoughts and actions they believe they can anticipate. They also often have different interests, including an inclination to prefer status quo preservation (and to see the status quo more favorably) than those who have been less rewarded by the status quo. The media class, by and large, is not furious with the political class or with prevailing conditions, and they thus failed to detect the sentiments of anger and anxiety that drove the Trump campaign (and, in some similar ways, the Sanders campaign).

Let’s acknowledge all the valid caveats: There’s nothing inherently wrong with making predictions, and everyone who tries it is going to be wrong sometimes. Moreover, though there were some exceptions, very few pundits predicted Trump’s success (though there’s a huge difference between (a) refraining from predicting or doing so with a tone of uncertainty and (b) hubristically and condescendingly “explaining” The Truth to the world about what will happen). Many factors, such as Trump’s celebrity status, made these circumstances unusual. And everyone makes mistakes in every realm.

Nonetheless, it becomes a much different type of error when one invokes one’s own claimed authority and expertise when issuing such embarrassingly wrong pronouncements, and, worse still, when the tone used is one of certainty and hubris as though the decrees are being passed down from Mount Sinai. At the very least, when a profession that touts its expertise, collectively, is this wildly wrong about something so significant, more needs to be done than a cursory, superficial acknowledgment of error — or casting blame on others — before quickly moving on, in the hope that it’s all forgotten. Some collective, introspective soul-searching is in order.

UPDATE (Thurs.): Two Slate articles by Jamelle Bouie were originally included, but one of them was about Trump’s chances in the general election, and we thus removed it. The other, which denied that Trump could win the GOP nomination, remains.