Voters in the Philippines elected Rodrigo Duterte president despite — or because of — campaign speeches peppered with jokes about rape and viagra. 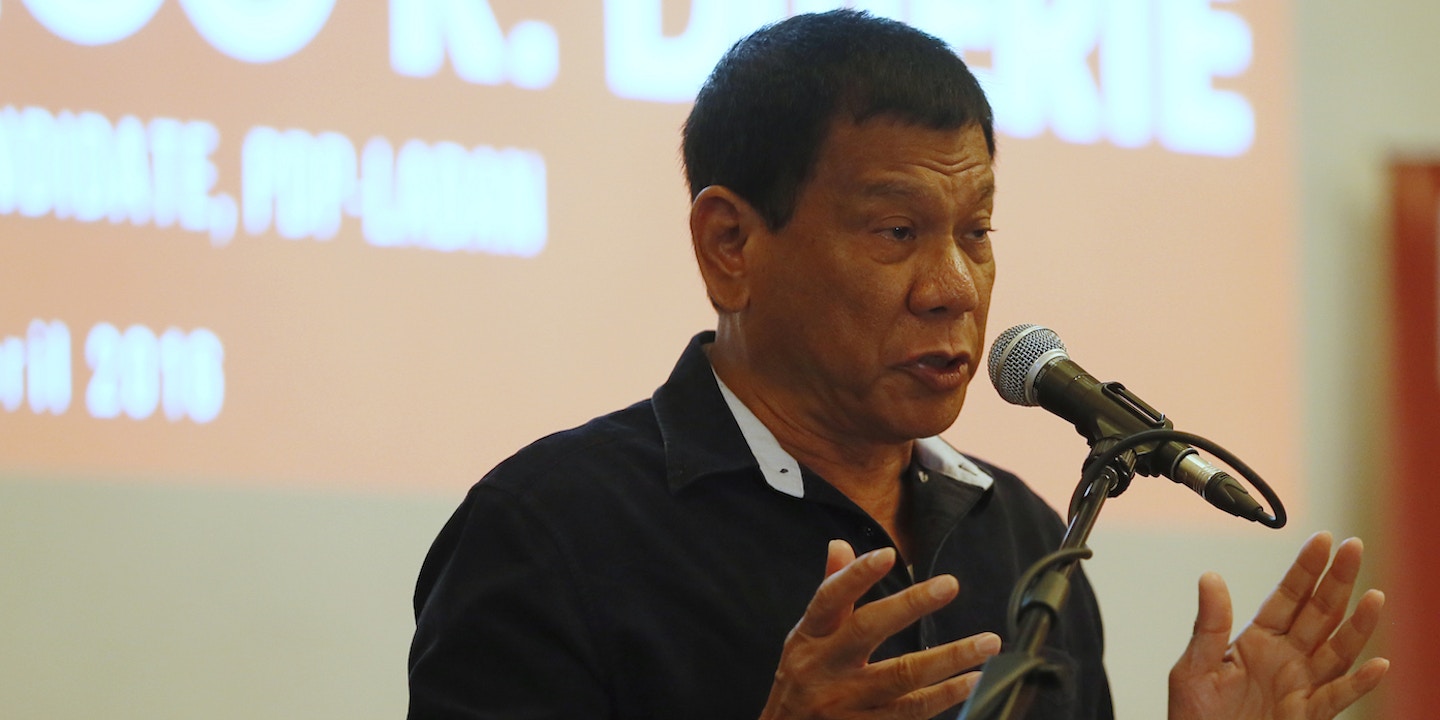 Despite his fondness for peppering campaign speeches with crude jokes about rape victims and his use of Viagra, the next president of the Philippines will be Rodrigo Duterte, a 71-year-old mayor whose signature policy proposal is a promise to eliminate crime within six months by licensing the police to murder suspects.

As his victory in the Philippines presidential election became clear in the early hours of Tuesday, Duterte visited the graves of his parents and cried.

Then again, as the Filipino journalists Patricia Evangelista and Nicole Curato suggested on the eve of Monday’s election, Duterte’s foul-mouthed speaking style and reputation as a crime-fighter — he is accused of sanctioning hundreds of extrajudicial killings by vigilante death squads in his home city of Davao — appears to be exactly what appealed to voters fed up with a dysfunctional political system that seems to serve just the 40 families that reportedly control three-quarters of the nation’s wealth.

Writing on the Filipino website Rappler, Evangelista and Curato observed that “an angry old man from the forgotten south has already changed the tenor of political conversation.”

The new tone, they added, “is indignant, often violent, but it is hopeful nonetheless, and it has energized a citizenry once resigned to politics as usual.”

He stands instead for the politics of the extreme. He says screw the bleeding hearts, and to hell with the bureaucracy. He voices the helplessness and rage of Filipinos forced to make do in a country where corruption is casual and crime is ordinary. Duterte has their backs, and he says the struggle ends here, today. He goes beyond anger, even beyond solutions. Digong Duterte offers retribution.

While Duterte, like his American analogue Donald Trump, won his race in part because votes were split among a large field of candidates, his supporters are so dedicated that they were willing to overlook remarks about the rape of an Australian missionary that would have doomed another candidate.

During a campaign rally in Quezon City last month, Duterte was caught on camera recounting his inner monologue when he first saw the body of Jacqueline Hamill, an Australian who was raped and had her throat slashed by rioting prisoners at a jail in Davao, 600 miles southeast of Manila, in August of 1989.

“When the body was taken out, it was already wrapped. I looked at her face. I said, ‘Fuck, she looks like an – like an American actress, a beautiful one,’” Duterte said, according to a translation from Rappler. “I said, ‘Fuck, what a waste.’”

“What went through my head,” he continued, “was that they raped her. That everyone had lined up to rape her. I got angry. That she was raped? Yes, that too. But it was that she was so beautiful – the mayor should have been first. What a waste.’”

Although video of the remarks horrified his critics, and was viewed hundreds of thousands of times online, Duterte actually extended his lead in opinion polls the following week.

Days later, the mayor issued an apology of sorts, but continued to insist he was not joking, but merely telling “the narrative” of what had actually passed through his mind.

As Carlos Conde, a researcher for Human Rights Watch in the Philippines, pointed out the next day, Duterte had been greeted with uproarious laughter when he told the same story three months earlier to a group called Volunteers Against Crime and Corruption in Manila.

Not first time Duterte ridiculed rape/murder of Aussie woman. At 38:30: "She's very beautiful. They beat me to her." https://t.co/BJu3mhm9qX

According to Phelim Kine, the deputy director of Human Rights Watch in Asia, the operation of death squads in Davao during Duterte’s time in charge has “resulted in the deaths of hundreds of street children, petty criminals, and petty drug dealers since 1998.”

“Duterte himself took to the airwaves in 2001–2002 to issue threats against what he considered undesirable elements in Davao,” Kine added. “Some of the criminals whose names he announced were later found dead, apparent victims of the death squad.”

Duterte reacted by encouraging Human Rights Watch to file charges against him, but said in the same interview that he would kill 100,000 criminals if he became president and dump their bodies in Manila Bay.

In the final weeks of the campaign, Duterte, the son of a provincial governor who started his career as a prosecutor, insisted that his promise to pardon police officers who shot and killed suspects was not an endorsement of murder.

At other times, however, he has boasted of the effectiveness of the vigilante killings that led to a drastic reduction in crime in Davao during his decades in charge. As Al Jazeera English reported last month from Davao, the vigilantes there are quite open about their role.

In an address to the nation’s business elite last month, after boasting of his Viagra-fueled sexual potency, Duterte promised that his presidency would be “a bloody one,” and said that he would “issue 1,000 pardons a day” to officers who kill suspected criminals.

He even joked that he would circumvent the law by pardoning himself as well. “Pardon given to Rodrigo Duterte for the crime of multiple murder, signed Rodrigo Duterte,” he said, to uneasy laughter.