Paul Ryan says Americans should elect Donald Trump president, even though his smearing of a judge is “like the textbook definition of a racist comment.” 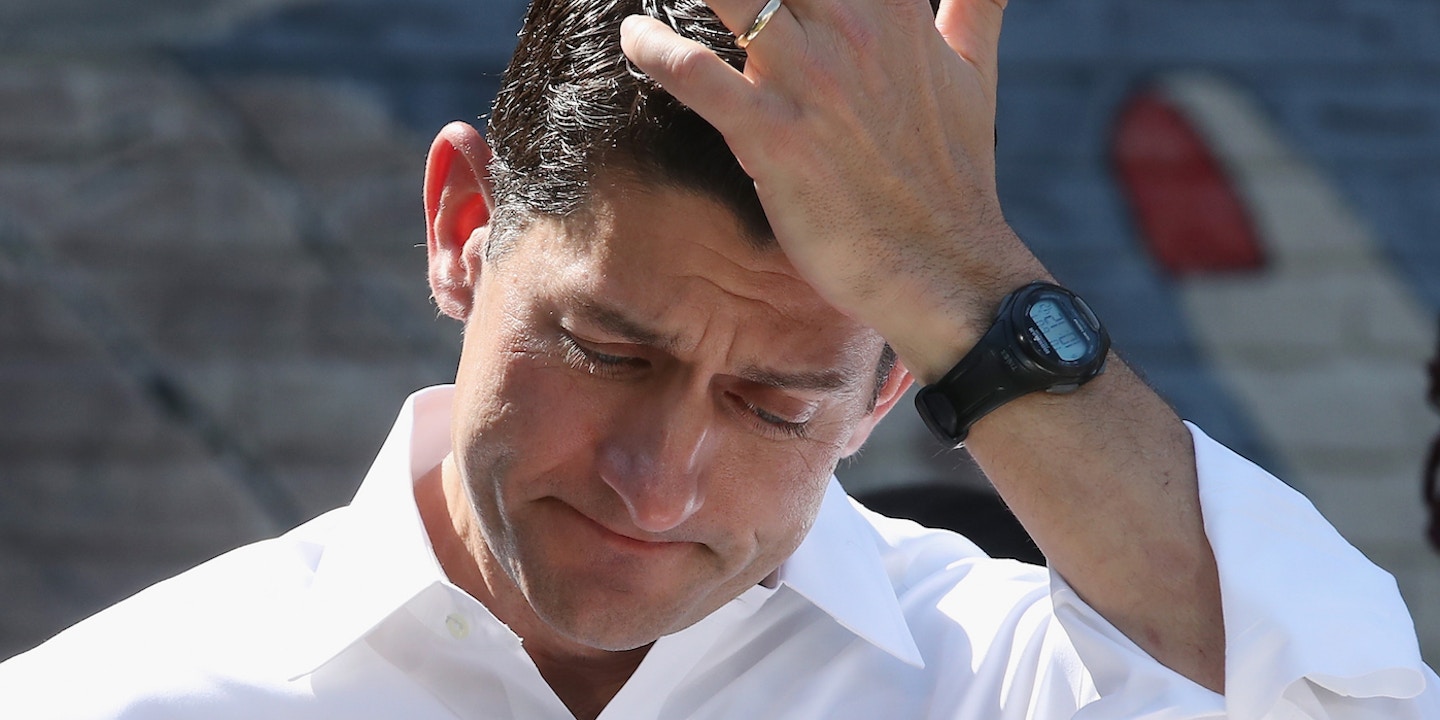 House Speaker Paul Ryan refused to withdraw his endorsement of Donald Trump on Tuesday even as he acknowledged that Trump made “racist” and “indefensible” comments about the Mexican heritage of Gonzalo Curiel, the federal judge overseeing a suit against the defunct Trump University.

In a remarkable 45 seconds captured on video by CNN, Ryan, who is currently the highest-ranking elected official in the Republican Party first called Trump’s comments obviously racist and then immediately urged Americans to vote for him anyway.

Speaking at the launch of an anti-poverty initiative in Washington, Ryan was asked if he had had any regrets about endorsing Trump in light of the candidate’s subsequent attempts to smear the judge based on his ethnicity. In his reply, Ryan denounced Trump’s words as though they could be separated from the man who made them, and argued that voters should still elect him president, since he would be more willing than Hillary Clinton to let a Republican Congress enact its policies.

“I disavow these comments. I regret those comments that he made. Claiming a person can’t do their job because of their race is sort of like the textbook definition of a racist comment,” Ryan said. Without pausing to draw breath, he then continued: “But do I believe that Hillary Clinton is the answer? No, I do not. … I believe that we have more common ground on the policy issues of the day, and we have more likelihood of getting our policies enacted, with him than with her. But I do absolutely disavow those comments.”

Pressed by reporters later to explain how he could continue to support a candidate who relies on such racist rhetoric, Ryan later seemed to speak of Trump’s mouth and heart as two separate entities, saying:

Later in the day, Rep. Lee Zeldin, a New York Republican who supports Trump, was reduced to making the convoluted argument that although the candidate’s statement was racist, the motivation behind it was not. “He isn’t making that statement because he feels like he is superior because he is white and the judge is Mexican,” Zeldin told CNN. “I don’t believe he is making that statement because internally he feels like he is of a superior race.”

Ryan was asked to take a position on Trump’s comments one day after Bloomberg News reported that Trump himself had overruled his staff and ordered surrogates speaking in support of his candidacy to attack reporters who questioned his comments as the real racists.

Trump’s refusal to retract his smear prompted a wave of revulsion from other members of the Republican establishment, including Stephen Hayes of the Weekly Standard, Sen. Lindsey Graham of South Carolina, and Wall Street Journal columnist Bret Stephens.

Bret Stephens smacks down a huge swath of the GOP. Civil war on the right: pic.twitter.com/WPgIt5TEzW

What makes this week’s repudiation of Trump’s racist comments about the high-achieving son of Mexican immigrants curious is that it comes a full 51 weeks after he clearly signaled his bias by devoting the second minute of his campaign announcement to a tirade about Mexico supposedly using the United States as “a dumping ground” for its drug addicts, criminals, and rapists.

GOP “shocked, shocked” by Trump’s racism, 51 weeks after he launched his campaign claiming Mexico sent rapists to US https://t.co/nEuKRZwdlp