The coalition bombing Yemen had been listed under “parties that kill or maim children” and “parties that engage in attacks on schools and/or hospitals.” 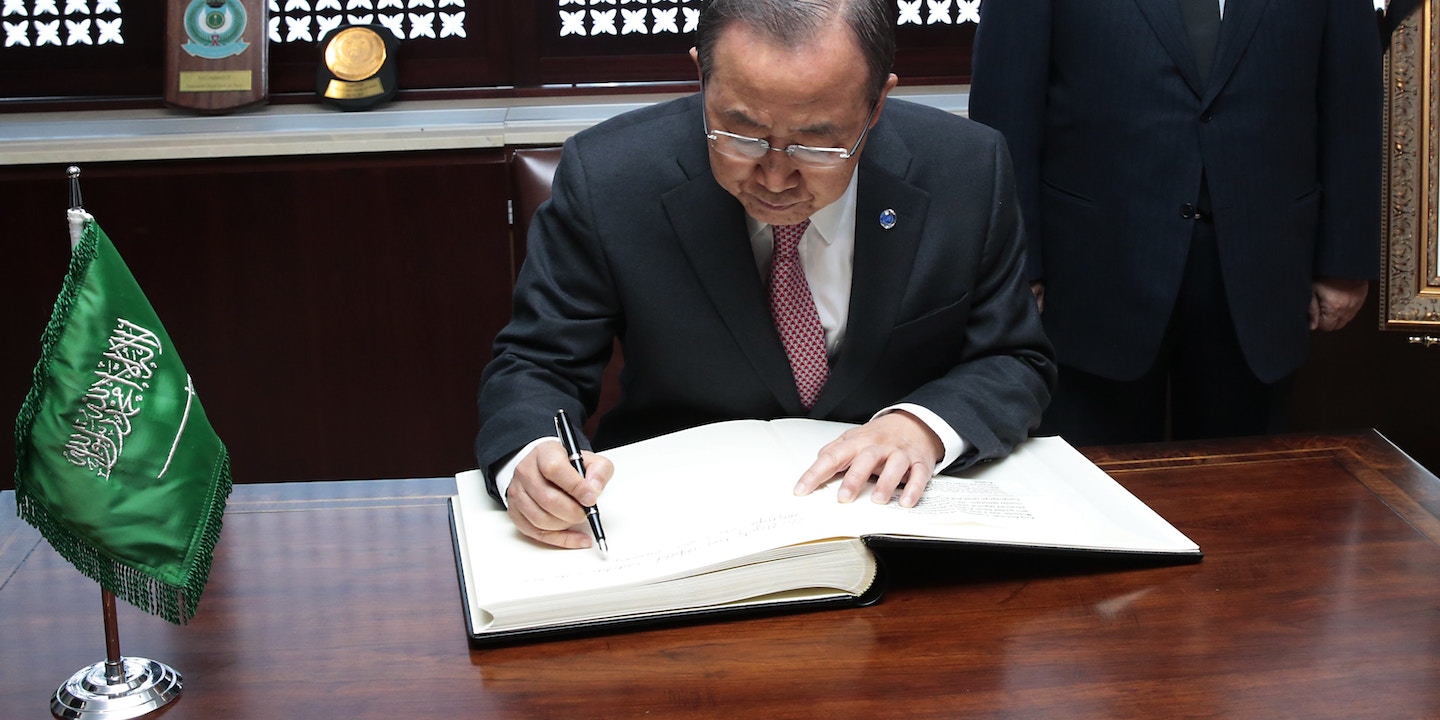 Under intense pressure from the Saudi government, the U.N. secretary general removed the U.S.-backed, Saudi-led coalition in Yemen from a blacklist of child killers only 72 hours after the list was made public.

The coalition had been listed in the appendix of the U.N’s annual report on children and armed conflict, under “parties that kill or maim children” and “parties that engage in attacks on schools and/or hospitals.”

According to the report, at least 785 children were killed and 1,168 injured in Yemen last year alone, 60 percent by coalition airstrikes. The report documents dozens of coalition attacks against Yemeni schools and hospitals.

Saudi Arabia is an unlikely but powerful voice in U.N. human rights deliberations. Last year, despite carrying out a record number of beheadings, the kingdom became the chair of the U.N.’s 47-nation Human Rights Council — a decision that met with international outrage, but that the U.S. said it “welcomed.”

In a press conference outside the United Nations Security Council headquarters on Monday, the Saudi ambassador to the U.N. reacted angrily to the child-killing report and requested that it “be corrected immediately so it does not reflect the accusations that have been made against the coalition.”

Since the war started in March 2015, more than 6,400 people have been killed, the majority by coalition bombs. The Saudi-led coalition has also devastated Yemen by imposing a strict naval blockade on the desert nation, which imports 90 percent of its food and 100 percent of its medicine.

According to UNICEF in March, nearly 320,000 children in Yemen are at risk of “severe acute malnutrition.” UNICEF also estimated that the war caused more than 10,000 Yemeni children under the age of 5 to die from preventable diseases and said millions more are at risk of diarrheal diseases, respiratory infections, and measles.

The Saudi government put out a series of statements Monday condemning the report and praising the war. “Everyone is witnessing that [the coalition] has been carrying out a noble task towards the Yemeni people,” one statement from the Saudi Press Agency read. “And fighting the insurgents and terrorists, as well as supporting and providing relief for Yemeni people, especially their children.”

The government blamed the Houthi rebels for children’s deaths. They are the ones “besieging the cities, starving the people, and shelling the hospitals,” said the Shura, an advisory council to Saudi Arabia’s king, in another statement.

U.N. Secretary General Ban Ki-Moon said the report was revised to “review jointly the cases and numbers cited in the text,” in order to “reflect the highest standards of accuracy possible.” He also announced that he would receive a team from the coalition in New York to conduct a “joint review” ahead of discussions on the report scheduled for August.

The Saudi ambassador, however, announced that the change to the list was “final and unconditional,” and that he had been “vindicated,” the Associated Press reported.

The removal sparked outrage from advocates and monitoring organizations.  “The U.N. itself has extensively documented the Saudi-led coalition’s airstrikes in Yemen that have caused hundreds of children’s deaths and hit many schools and hospitals,” said Philippe Bolopion, deputy director for global advocacy at Human Rights Watch. “As this list gives way to political manipulation, it loses its credibility and taints the secretary general’s legacy on human rights.”