A day after rededicating its Journalists Memorial, the museum hosted a retired Israeli military official who justified the targeted killing of Palestinian journalists. 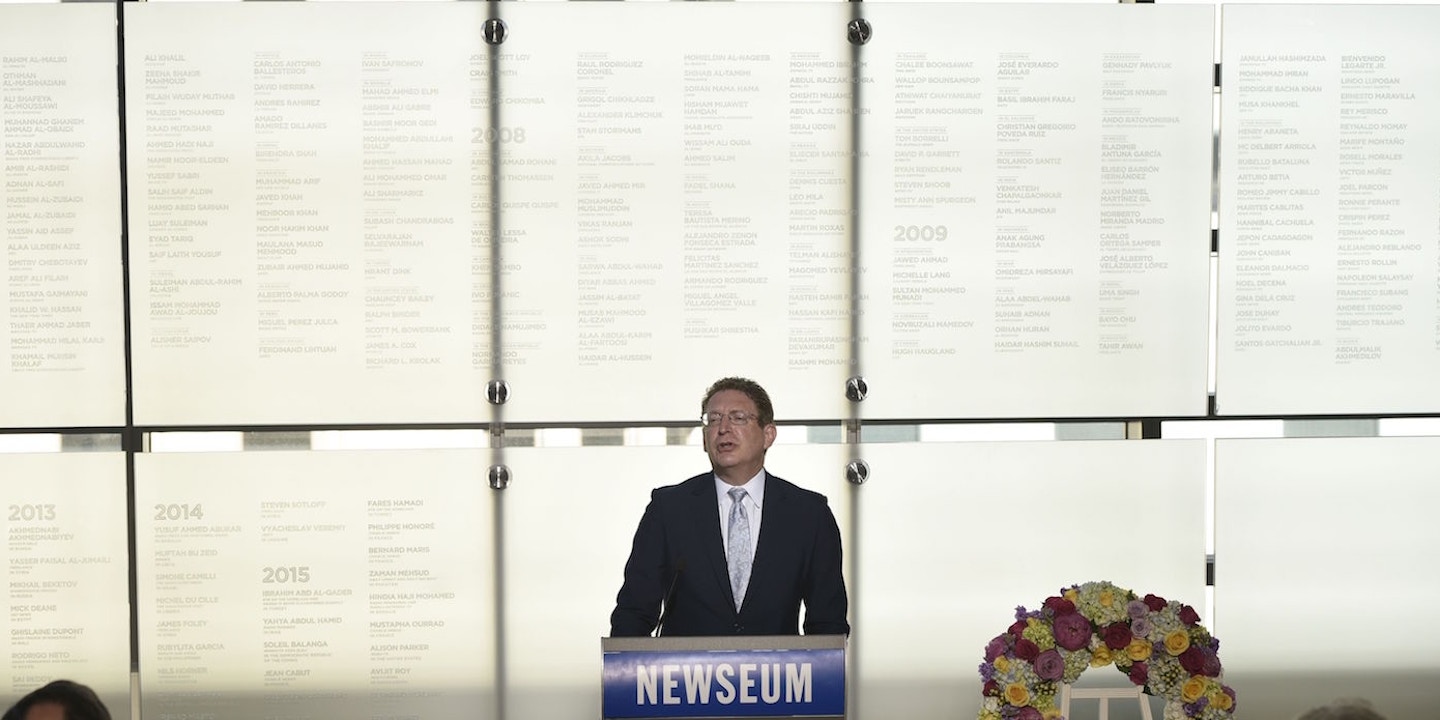 The Newseum — a private Washington, D.C.-based museum dedicated to exhibits and events about the free press — began the week on Monday by rededicating its Journalists Memorial, which honors reporters who died in the line of fire.

The next day, it hosted a discussion on the use of social media in war featuring a retired Israeli military official, Lt. Col. Avital Leibovich, who in 2012 justified the targeted killing of Palestinian journalists whose names appear on that memorial.

Leibovich, who now works as the director of the American Jewish Committee’s Israel office, used her time on stage to essentially reprise her role as a spokesperson for the Israeli Defense Forces (IDF), using slides and videos to show how the IDF is trying to rebut what she called a biased image of the Israeli-Palestinian conflict from the Western media and Palestinians.

“The IDF is working around 30 platforms, six languages — including Arabic by the way — the idea is really to get information out there,” she explained, as she scrolled through slides of military-produced YouTube videos showcasing alleged Hamas crimes and Israeli aid to Gaza.

The lecture was repeatedly interrupted by protests, including by the anti-war organization Code Pink. Protesters asked Leibovich and the Newseum to address her past defense of targeted Israeli killings of Palestinians Mahmoud al-Kumi and Hussam Salama, two Palestinian media workers employed by the Hamas-affiliated Al Quds TV.

Following the Israeli bombings in 2012 that killed al-Kumi and Salama, Leibovich wrote to the New York Times to argue that the two were legitimate targets because “such terrorists, who hold cameras and notebooks in their hands, are no different from their colleagues who fire rockets aimed at Israeli cities and cannot enjoy the rights and protection afforded to legitimate journalists.”

This justification earned a rebuke from the Committee to Protect Journalists, which said that “Leibovich seeks to erase the crucial legal distinction between armed combatants and journalists covering the perspective of an adversary. … All journalists, whether local or foreign, regardless of the perspective from which they report, are afforded the same civilian protections under international law.”

The Newseum took the side of the rights groups by including al-Kumi and Salama in the 2013 edition of its annual Journalists Memorial of reporters who were killed in the line of duty.

This sparked a harsh backlash from allies of the Israeli government, with the president of the Foundation for Defense of Democracies threatening to pull his annual conference from the Newseum if it did not remove their names. The Anti-Defamation League and the American Jewish Committee also issued protests.

The museum initially relented under pressure, briefly removing both of their names from the online database. In response to an inquiry from The Intercept, Newseum spokesperson Jonathan Thompson said the cases were reviewed for “several months” and it was decided that they would be once again listed in the online database. They were never removed from the physical memorial.

In a statement to the Palestinian Journalists Syndicate, which protested the invitation of Leibovich, Newseum CEO Jeffery Herbst said that the institution “has a bedrock commitment to free speech and free expression,” and that the event was “an example of fostering … a debate.”

But both Leibovich and Herbst were tight-lipped when faced with questioning from the audience and The Intercept about the killings of al-Kumi and Salama, both of whom were memorialized on the institution’s walls less than a hundred feet away.

“Why did the Newseum, as an institution dedicated to freedom of the press, think it’s a good idea to invite someone who justifies and murdered two people who you recognize were slain journalists in the line of duty?” one unidentified questioner asked.

“As I said, social media is an important part of the landscape of many different issues including warfare, that’s why we’re having this discussion,” Herbst replied.

The Intercept asked Leibovich whether she agreed with the Newseum listing al-Kumi and Salama in its Journalists Memorial.

“The topic I was invited to speak on is social media,” she replied. “Any other issues are not relevant to the discussion in my opinion.”

One attendee, Ramah Kudaimi, sarcastically asked if the Newseum would be featuring other governments implicated in abuses against the press — such as Syria — to offer their own appraisal of their social media strategies in the future.

“We’re going to continue to explore the use of social media in many different fields,” Herbst replied, dryly.