Read Part 1 and Part 3 of this series.

Hakim was home alone with his two dogs, relaxing one night in March, when his cellphone rang. The man on the other end of the line asked a simple question: “Do you know that we can assassinate you at any time?”

In seconds, the line went dead.

Harassment is nothing new for Hakim. The 30-year-old has been questioned by national security operatives many times. But none of those experiences was quite like the assassination threat.

“This last one was really serious,” he says, with understatement.

Hakim lives in a dangerous land. Since plunging into civil war in 2013, South Sudan has seen up to 300,000 civilians killed and 2.4 million driven from their homes by a conflict marked by sexual slavery, rape, assault, torture, extrajudicial killings, abductions, destruction of homes and villages, and pillage.

A peace deal signed last summer has not halted the bloodshed nor did it completely quell violence between the two main parties to the war — the government of President Salva Kiir, an ethnic Dinka, and the opposition forces led by Riek Machar, an ethnic Nuer and sacked vice president-turned-rebel leader-turned-vice president again in a recently formed unity government.

Even in the capital of Juba, anyone might be attacked, might fall victim to violence. But Hakim is in additional jeopardy. He works in a high-risk profession. Colleagues of his have recently been beaten, tortured, and dumped in graveyards. Others have fled the country. A group of them was massacred last year.

Hakim George Hakim is a journalist. After a brief burst of press freedom around the time of South Sudan’s independence in 2011, the situation steadily declined — especially after the outbreak of the civil war. The low point came last year when President Kiir — a longtime U.S. ally who is hardly ever seen without a cowboy hat, like the ones given to him by Secretary of State John Kerry and former President George W. Bush — publicly threatened journalists. “Freedom of the press does not mean that you work against your country,” he told a group of reporters. “If anybody among them does not know that this country will kill people, we will demonstrate it, one day, on them.”

Three days later, on August 19, 2015, Peter Julius Moi, a journalist with New Nation and The Corporate, was gunned down near his home on the outskirts of Juba. Moi was not known as a muckraker, so some people have chalked up his killing to a personal dispute. Others say Moi was an easy target and a convenient way to send a message. What’s clear is that he was shot in the back, no money or personal effects were taken from him, and his murder remains unsolved.

His killing is just one particularly heinous act in a string of attacks against journalists: 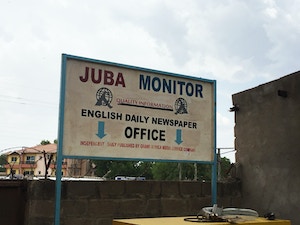 A sign at the compound of “Juba Monitor,” one of South Sudan’s leading English-language daily newspapers.

“The press freedom situation in South Sudan is never good, but during the course of the war things have tended to go up and down,” said Jason Patinkin, an American journalist in South Sudan. “The time around the signing of the peace deal in August 2015 was particularly bad in terms of closures of media houses, threats, and even the murder of reporter Peter Moi, which remains unsolved. The last month or so with so many arrests feels like another low point.”

There are no useful estimates, much less accurate statistics, of crimes against journalists in South Sudan, which ranks 140th out of 180 countries in the World Press Freedom Index published by Reporters Without Borders this year. Last year, the Union of Journalists of South Sudan counted 40 instances of all types — unjustifiable arrests, detentions, and harassment, as well as the killing of seven reporters including Moi. The Community Empowerment for Progress Organization, a civil society organization that also tracks such abuses, has documented 23 incidents of harassment or violence against journalists so far this year. These numbers, however, fail to scratch the surface.

“Harassment is going on every day,” said Alfred Taban, editor-in-chief of the Juba Monitor, a top English-language daily, and chairperson of the Association of Media Development in South Sudan, echoing what more than 20 reporters, editors, media experts, and human rights advocates told me when I recently visited South Sudan. According to Koang Pal Chang, the station manager of Juba’s Eye Radio and chairman of the National Editors Forum, “The large majority of these [incidents] are not recorded. … But it’s what everybody goes through.” As he explained it, “We’ll send a journalist to cover a government press conference and a minister will say, ‘You, Eye Radio, you are reporting about this or that. If you don’t stop, we’ll close you down.’” One reporter, he told me, was locked up for three hours by members of the security services and told, “Next time we see you, we’ll spray you with bullets.”

In the past, Minister of Information Michael Makuei has threatened members of the media with harsh punishments if they even broadcast interviews with opposition figures, saying they would be treated as rebels themselves. In April, he warned radio stations against broadcasting live call-in programs and demanded journalists use only the names of 28 states designated in a presidential decree last October, rather than the 10 states established under the constitution. Then, of course, there was Kiir’s famous death threat.

Ateny Wek Ateny, the president’s press secretary, claims reporters are not subject to any official harassment. “They are not detained,” he told me. “They are questioned and cautioned. There is no intimidation.” He also insists Kiir did not threaten journalists and bears no responsibility for violence against them. Kiir, he told me, was attempting to say that too many people have already been slain in South Sudan. As a result, journalists needed to “think nationally” and not write articles that might incite violence. But reporters who listened to Kiir firsthand say there was no doubt about what he meant. It was, they told me, an unambiguous threat. A recording of Kiir’s comments seems to confirm this. Newspaper vendors sell “The Citizen” newspaper at a bus station in Juba, June 19, 2012.

Unfortunately, it’s not just President Kiir’s forces that are accused of harassing journalists. Machar’s rebels — who are now being reintegrated into Kiir’s government — have also been implicated in the same type of harassment.

I met Lieth — who, to protect himself from retribution, requested I not use his full name — on a bright, hot Sunday morning. Anxious about his safety, we spent a half hour trying to come up with a place where he would feel comfortable to talk. Lieth has reasons to worry. He’s a Nuer journalist in a city where Nuers were targeted by Kiir’s forces for execution in 2013; a city where almost 28,000 people, most of them Nuers, still live behind the berms and fences of a United Nations base. He’s also indelibly marked as a Nuer, sporting the traditional tribal scars — known as gaar — across his forehead.

Before the civil war began in 2013, Lieth covered local stories that led him to be arrested four times. I asked what type of story resulted in his first arrest. An investigation of official corruption? Human rights abuses?

“It was a congratulatory ceremony where they gave a bull to the governor,” he told me.

So this was a public event?

“Yes,” he responded, shaking his head in bemusement.

When he was spotted setting up recording equipment, local security forces slapped him around, confiscated his gear, and threatened to kill him for “betraying us.” Lieth was held for several hours, then released.

The risks changed with the outbreak of civil war. Many Nuer journalists went into exile or sought the protection of U.N. camps. Leith was among them but later found his way into areas controlled by the predominantly Nuer rebel forces. The scars that jeopardized his life, however, didn’t put him above suspicion when he attempted to interview a top rebel general.

“The general asked which side am I supporting,” Lieth recalled. “I told him, ‘I’m a journalist. I’m neutral. I don’t support any side. … I’m reporting stories. I’m working independently.’”

The general, he recalled, became very angry and unleashed a torrent of threats: “You say you’re not supporting any side? You must be a Dinka. I will not let you go. I will have to kill you.”

Lieth protested and argued for his rights, while other journalists rose to his defense. Eventually, he was allowed to leave and began walking out of the military camp. Before he left, however, a captain who had witnessed the exchange with the general had guards detain him, saying, “He’s not one of us.” After holding him for a couple of hours, the captain finally let him go, but not before telling him, “In this conflict, you can be killed at any time.”

Not surprisingly, when Machar recently returned to Juba to rejoin the government, members of his security detail reportedly blocked some journalists from covering his arrival and press conference. 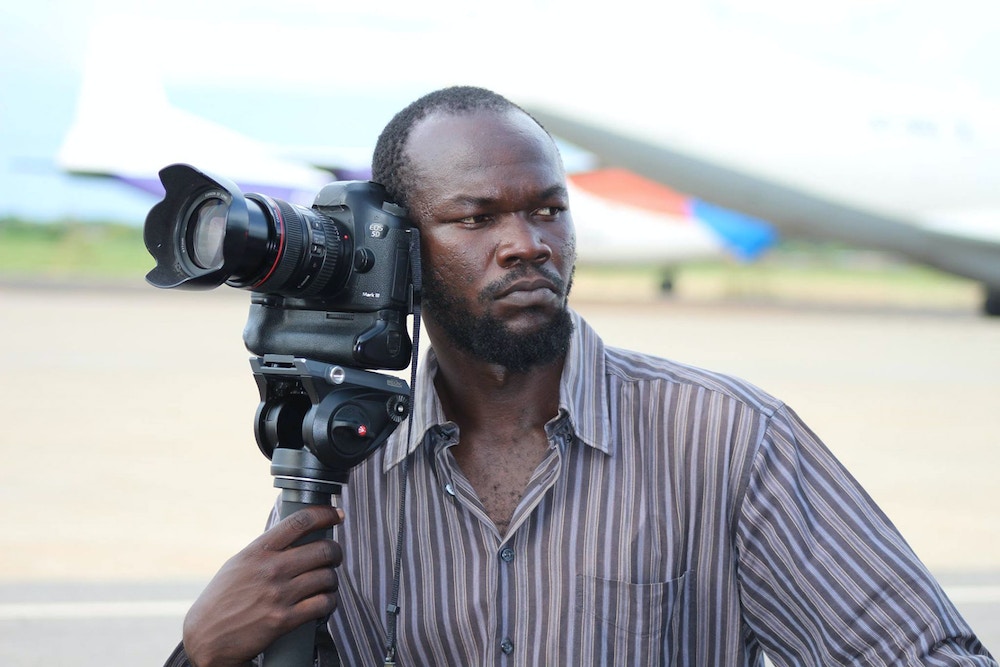 Hakim George Hakim, who works as a freelancer for Reuters, told me that the NSS has called him many times and asked him to explain political posts on his Facebook page. “They say, ‘Next time don’t do this,’” he told me. “It affects your work. It affects your output.”

The week before we spoke, Hakim believed he was being followed while driving.

After circling a roundabout three times with the car behind him, he sped through Juba’s streets, finally losing his apparent pursuer.

Then his car was broken into, with all documents bearing his name stolen — like his national ID card and his driver’s license — but not documents belonging to his girlfriend.

“I considered that something special,” Hakim said. “It’s not just a robbery.”

That same night, a type of pickup truck that the government often uses was waiting near his home. It started up just as Hakim’s car drove past.

Patinkin, the American reporter, was in Hakim’s car.

Friends driving in a car behind them helped run interference and Hakim escaped.

“I believe that if it was Hakim alone, he could have been kidnapped or worse,” Patinkin said.

Hakim is not deterred.

So why keep reporting in the face of escalating threats?

“There’s so much shit happening here,” Hakim said with a laugh. “Who else is going to let the world know about it?” Turning more serious, he added, “I believe this country can be great. I believe in South Sudan. That’s why I keep reporting.”

Part 1: Hillary Clinton’s State Department Gave a Pass to South Sudan’s Military for its Child Soldiers
Part 3: In South Sudan, It’s Hard to Tell the Soldiers from the Criminals

Reporting for this story by Nick Turse, who is the author of Next Time They’ll Come to Count the Dead: War and Survival in South Sudan, was made possible through the support of Lannan Foundation.