LGBTs know full well how deceitful it is to depict anti-LGBT animus as a uniquely Muslim pathology.

In the late 1990s, Eric Rudolph — raised Catholic and affiliated for a time with a Christian Identity sect — bombed abortion clinics and a gay bar, insisting they were venues of immorality and evil. Last July, an Orthodox Jewish Israeli attacked the marchers in the Jerusalem LGBT pride parade, stabbing six of them, and one of them, a teenager, died of her wounds; justifying his attacks by appealing to Talmudic punishments for homosexuality, he had just been released from a 10-year prison term for doing the same in 2005. Yesterday, a Christian pastor from Arizona, Steven Anderson, praised the slaughter of 49 people in an Orlando LGBT club on the ground that “homosexuals are a bunch of disgusting perverts” and are “pedophiles.”

Violent attacks on gay bars in the U.S. have long been common, as sociology professor Greggor Mattson documented today: “The crime blotters of the gay press have always been punctuated by attacks on patrons at gay bars and continue to be today,” including killings. In 2014, a brutal hate crime against a gay couple was carried out by staff and students at a Catholic high school. In overwhelmingly Catholic and evangelical Brazil, killing of trans women is now an epidemic. The Terrence McNally play Corpus Christi was repeatedly targeted in the U.S. with bomb threats and had to be canceled because it depicted Jesus as gay.

A 2015 Pew poll found that U.S. Muslims were more accepting of homosexuality than evangelical Christians, Mormons, and Jehovah’s Witnesses: 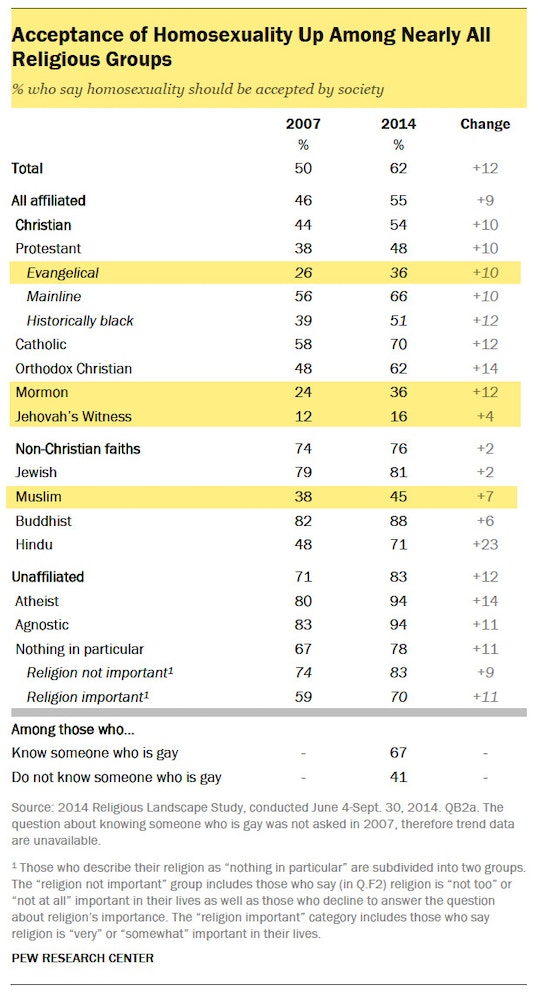 Both China and Russia are overwhelmingly non-religious and also vehemently anti-gay; to the extent Russians are religious, they are loyal to the Orthodox Christian Church. In Cameroon, Catholic Church officials continue to spew the most vile and inflammatory anti-gay rhetoric. A prominent evangelical multimillionaire Brazilian pastor and congressman with a history of vile anti-gay rhetoric, Marco Feliciano, yesterday attacked the LGBT community for “using” the Orlando massacre for “self-promotion” and instead said that support for Palestinians was to blame.

Over the last several years, Christian zealots in the U.S. have agitated with both activism and money — often successfully — for the implementation of severely repressive anti-LGBT laws in Christian Africa. That includes Uganda, where they tried to implement the death penalty for homosexuals. The law that was passed, criminalizing homosexuality, has led to severe increases in violent attacks against LGBTs. None of this is to deny in the slightest that deeply anti-LGBT attitudes are pervasive in parts of the Muslim world: In most countries (though not all) acceptance is in the single digits. But that’s also true of equally poor parts of the Christian world, where only tiny parts of the population of largely Christian countries such as Ghana, Uganda, and Kenya believe society should accept homosexuality. In other countries that are not predominantly Muslim — China, Russia, Nigeria, El Salvador, Israel — pluralities similarly oppose the societal acceptance of homosexuality.

It’s also true that parts of Islamic doctrine contain all sorts of horrible views on LGBTs, women, and other issues. But exactly the same is true of both the Christian Bible and Jewish Talmud. When it comes to Jews and Christians, people instinctively understand how bigoted and deceitful it is to cherry-pick particularly offensive excerpts from their holy books and use them to demonize all contemporary Christians and Jews.

Indeed, a standard tactic of neo-Nazis and other various anti-Semites is to cite ugly excerpts from the Talmud — including ones purportedly endorsing Jews holding non-Jews as slaves or lying to and stealing from non-Jews — as evidence of the dishonesty and untrustworthiness of Jews generally. We all understand that this tactic is so vile, unscholarly, and anti-intellectual precisely because modern adherents to those religions interpret and apply (or ignore) those provisions in all sorts of ways.

Exactly the same is true of Muslims, yet an entire cottage industry of pseudo-intellectual charlatans — including ones who admit to never having even read the Quran — uses exactly this tawdry tactic to demonize Islam (watch this social experiment where people are read heinous Bible passages and falsely told they are from the Quran). There are literally millions upon millions of Muslims who hold positive views about, and engage in positive interactions with, gay people with regularity (which is why it’s almost always true that those most devoted to demonizing Islam are the ones who know the fewest number of Muslims (just as is true of LGBTs, ironically)).

Indeed, there are LGBT Muslims all over the world who — just like all other LGBTs — struggle to meld their identities and religious convictions and navigate various personal conflicts. As the executive director of the largest American Muslim group, CAIR, said yesterday: “For many years, members of the LGBT community have stood shoulder to shoulder with the Muslim community against acts of hate crimes, Islamophobia, marginalization, and discrimination. Today, we stand with them, shoulder to shoulder.” Muslims who work to make Islam more open to LGBTs deserve support, but those most eager to demonize Islam — for all sorts of tribalistic, nationalistic, and religious reasons — typically erase such people because their presence demonstrates how misleading the absolutist pictures of Muslims they want to paint are.

Despite all this data, the standard group of hateful polemicists who literally seem to devote their lives to exploiting every news event to attack Islam wasted no time yesterday — before any facts were known, while the bodies were literally still in the club — squeezing the horrific slaughter in Orlando to depict Muslims as uniquely hateful of LGBTs. Never mind that the suspect, Omar Mateen, showed no signs of religious fanaticism, was (according to numerous close sources) suffering from mental illness, had a history of wife-beating, worked for a major defense/mercenary contractor, had no known connection to extremist groups until his 911 call citing ISIS, and was obsessed with joining the NYPD.

The opportunity to exploit LGBT suffering to fuel the standard anti-Muslim agenda was far too attractive to resist, no matter how many facts negate it. Try to tell LGBT citizens who grew up in North America, or South America, or Europe, that anti-gay hatred is an exclusive attribute of Islam and the scorn you’ll provoke — grounded in actual personal experience rather than hateful ideology — will be intense. The instant exploitation of this attack is part of a more general trend of exploiting liberal social issues to glorify agendas of militarism, tribal conflicts, and aggressive foreign policies. Decorate the GCHQ headquarters or the Tel Aviv city hall with the LGBT’s rainbow flag colors and suddenly mass surveillance and decadeslong military occupation seem pretty and liberal. Choose militaristic U.S. presidents who represent social milestones of race and gender and suddenly their militarism seems to liberals to be more tolerable and even inspiring. Pretend that the war on Afghanistan is about feminism, and aggression toward Iran is about protecting LGBTs, and watch liberals melt with appreciation. Disguise anti-Muslim animus as pro-LGBT activism and one can quickly expand support for a neocon mentality and agenda into large sectors of Western liberalism.

Depicting anti-LGBT hatred as the exclusive (or even predominant) province of Islam is not only defamatory toward Muslims but does a massive disservice to the millions of LGBTs who have been — and continue to be — seriously oppressed, targeted, and attacked by people who have nothing to do with Islam. The struggle of LGBTs around the world is difficult enough without having them cynically used as some sort of prop to bash a group that itself is already being bashed from multiple directions.