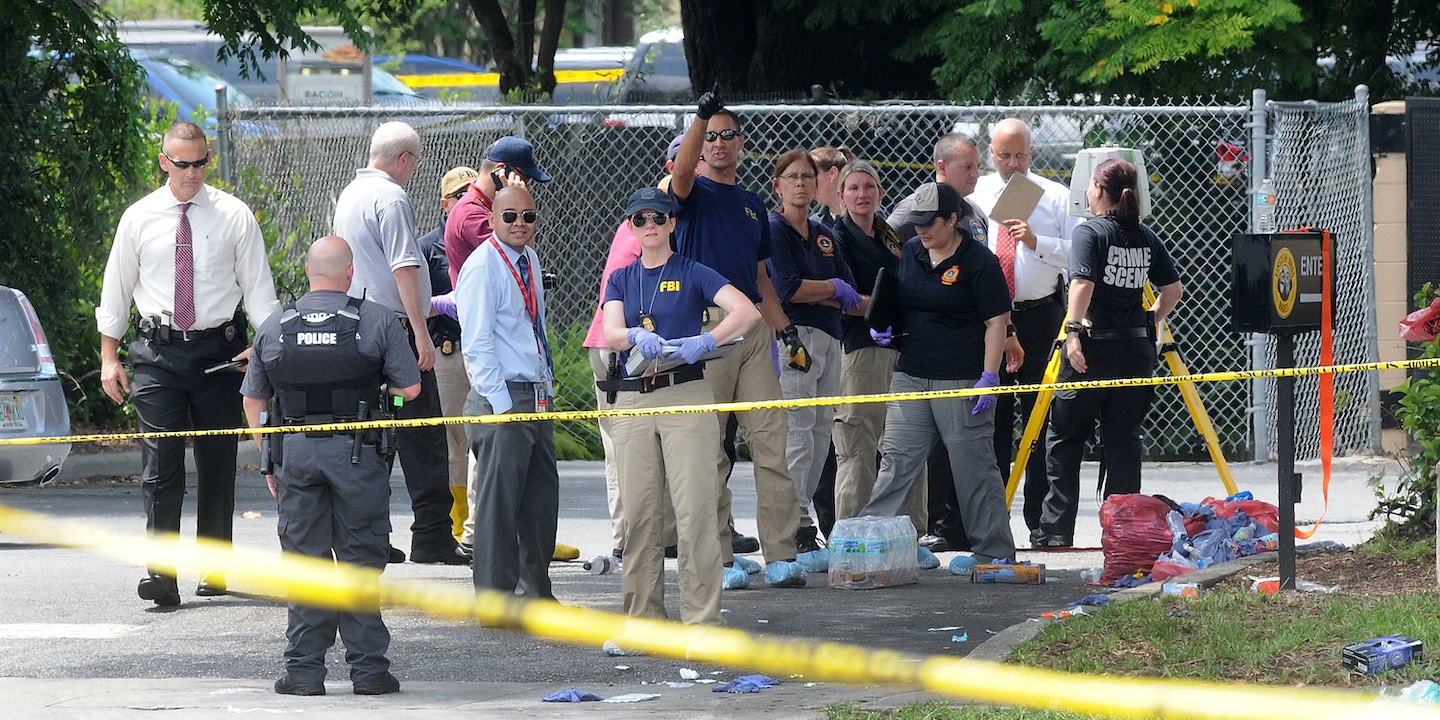 The man who shot over 100 people and killed 49 in an Orlando nightclub Saturday worked at a retirement home as a security guard for G4S – a giant, often controversial global contracting corporation that provides mercenary forces, prison guards and security services. G4S is one of the world’s largest private security companies, with more than 620,000 employees and a presence in over 100 countries.

G4S confirmed in a statement that Omar Mateen had worked for the company since 2007, and said it was “shocked and saddened” by the shooting. A later statement said that Mateen was subject to “detailed company screening” in 2007 and again in 2013, “with no adverse findings.”

But one of Mateen’s former coworkers told the New York Times that he “saw it coming,” that Mateen “talked about killing people all the time,” and that he was “always angry, sweating, just angry at the world.”

The coworker, who said he quit his job due to harassment from Mateen, explained that he “complained multiple times” to G4S, because Mateen didn’t like “blacks, women, lesbians, and Jews.”

Yet G4S continued to employ Mateen, who was able to obtain a “security officer” license to buy firearms in addition to his state license and conceal carry permit.

Mateen was even allowed to work at G4S while under FBI investigation. According to the FBI, Mateen was suspected of involvement in terror in 2013. The FBI investigation included the use of paid informants, recording conversations, following him, electronic surveillance, and interviewing him three times, FBI Director James Comey said on Monday. The investigation was closed because it produced no hard evidence of terrorist complicity.

G4S’s statement says that Mateen was subject to “checks from a U.S. law enforcement agency with no findings reported to G4S.” But according to the New York Times, the investigation took place because of “reports from [Mateen’s] coworkers, that he… suggested he may have had terrorist ties.”

G4S has previously been accused of improperly vetting its employees. In 2009, Danny Fitzsimons, a former British paratrooper and employee of a G4S subsidiary, killed two colleagues in Iraq, claiming to be “the antichrist” and saying he “must satisfy” his “bloodlust.” An official investigation concluded that his employer did not properly vet his psychological health.

In 2007, G4S signed contracts with five Israeli prisons and “interrogation centers,” leading to accusations that it was complicit in torture and the imprisonment of children. In 2010, three G4S security guards killed an Angolan national during a deportation flight from the U.K., by restraining him in an asphyxiating position.

In January, five G4S officers were arrested after a BBC expose revealed systematic abuse and neglect at a G4S-run youth jails.

G4S has also become a focal point for the Israel-focused Boycott, Divestment, and Sanctions Movement over its partnerships with Israeli prisons and military checkpoints. Activist pressure has led to divestment from the company by the Bill and Melinda Gates Foundation, the United Methodist Church, and UNICEF in Jordan. G4S has since announced that it would end its Israeli prison contracts.

In 2002, G4S acquired the United States-based Wackenhut Corporation, a private security and prison contractor with a deeply troubled history, including the widespread sexual assault of inmates at a Texas detention center in 1999.

Wackenhut went on to win a contract to guard the U.S. Embassy at Kabul, worth $189 million over five years. In 2009, the Project on Government Oversight sent a letter to then-Secretary of State Hillary Clinton with photographic evidence that embassy guards had created a “Lord of the Flies environment,” at the embassy, said to include guards and supervisors “peeing on people, eating potato chips out of [buttock] cracks, vodka shots out of [buttock] cracks… [drunken] brawls, threats and intimidation from those leaders participating in this activity.”

Nevertheless, Wackenhut was hired by the U.S. government and BP in 2010 to manage perimeter security for the Deepwater Horizon oil spill on the Gulf Coast.

In 2011, G4S won a contract to provide security for the 2012 London Olympics – only to overcharge the British government and provide understaffed security.

On the news that Mateen worked for G4S, the company’s stock dropped 6.6 percent, wiping out $280 million in company value.

Top Photo: FBI agents seen outside of Pulse nightclub after the fatal shooting in Orlando, Florida.