As Cleveland prepares to host the RNC, protesters denounce restrictions on free speech and warn that poor planning will increase the chances of violence. Anyone venturing into a 3.3-square-mile “event zone” surrounding next month’s Republican National Convention will be prohibited from carrying tennis balls, tape, rope, bike locks, sleeping bags, or any object they could stand on to rise above the crowd and speak. They won’t be allowed to carry swords or water guns. But if they have a license, they’ll be permitted to openly carry real guns, including assault weapons.

As Cleveland gears up to host one of the most controversial GOP conventions in decades, Ohio’s permissive gun policy isn’t the only red flag raised by prospective protesters and civil rights advocates. Many also warn that the regulations put in place by the city place “unacceptable restrictions on free speech” and risk escalating conflict, rather than diffusing it, by forcing rival groups of demonstrators to share tight quarters and schedules while keeping them out of sight and earshot of delegates and the media.

The restrictions imposed on the large event zone drawn around Cleveland’s Quicken Loans Arena — known locally as “The Q”— have earned the city a lawsuit filed by the ACLU of Ohio and widespread criticism across the spectrum of groups planning to show up at the convention to make their voices heard. 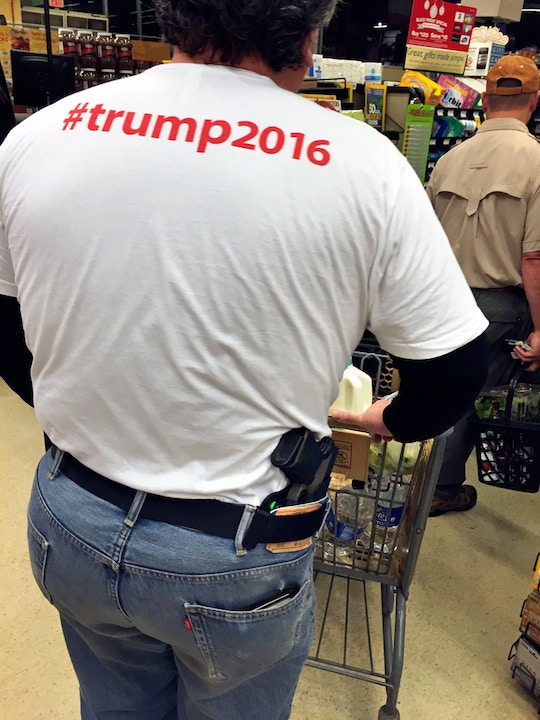 A man carries a semi-automatic pistol while he waits in line to purchase groceries at a Safeway grocery store in Alexandria, Va., Nov. 21, 2015.

“It’s the first time I’ve gone to a protest where there’s been so much talk of guns and the fact that people can carry them legally,” said John Penley, a 64-year-old Navy vet, Occupy Wall Street activist, and career protester, who said he has lost count of how many conventions he has attended. “They throw pro- and anti-Trump protesters together, and throw in the fact that maybe people will be carrying weapons. … It seems like what they want to do is increase the chances for conflict.”

The nearly 30 groups that have applied for permits to protest at the convention have been told marches can only take place between 9 a.m. and 4 p.m., with an hour off for lunch, while most action inside the convention hall is expected to take place in the evening. Marches are restricted to a 1-mile route over a bridge where they can hardly be seen. “The route takes a sharp right away from the Quicken Loans Arena and kind of dumps people into an industrial wasteland,” Christine Link, the executive director of the ACLU of Ohio, told The Intercept. “There’s nowhere to get a bottle of water, and it’s a long way back to your car.”

Protesters fear they will be effectively silenced by the isolation, but also worry about the close scheduling of groups on polar opposites of the political spectrum. For instance, members of the radical leftist Revolution Books are set to share one of two small gathering places with Westboro Baptist Church, an anti-gay hate group best known for picketing high-profile funerals. “As you can imagine,” Link said, “these groups are not going to be very friendly to each other.”

The ACLU lawsuit was filed on behalf of three groups: Citizens for Trump; Organize Ohio, a coalition of grassroots organizations planning an anti-poverty march during the convention; and the Northeast Ohio Coalition for the Homeless, which is not planning to protest but argues that the broad event zone imposes an unfair burden on an area that includes three homeless shelters and two homeless encampments.

The groups that applied for permits are only a fraction of those expected to show up at the convention. “Anarchists don’t typically ask for permits,” Link observed. Those hoping to protest by the book have had to deal with malfunctioning electronic request forms, delays, and a lack of communication from the city. The restrictions now imposed on protesters are only going to push more people to rally without authorization.

“They have to know that most people will never go along with this,” said Larry Bresler, a member of Organize Ohio. “It’s like they have no understanding whatsoever of what can be expected to go on during a convention.”

Cleveland’s Division of Police referred all convention-related questions to the mayor’s office, which did not respond to requests for comment.

Cleveland received a $50 million federal grant to gear up for the RNC. A complete list of items the city has obtained has not been made public, but according to the National Lawyers Guild (NLG), which has been monitoring preparations, it includes 10,000 sets of flex cuffs; “nonlethal munitions” like bean bag pellets; pepper spray; 2,000 sets of riot gear; 2,000 retractable steel batons; 3.7 miles’ worth of steel barriers; as well as body armor, including ballistic helmets, face visors and shields, and chest, arm, leg, and groin protection. The list also includes video surveillance equipment, laptops, night vision devices, and 16 Pointer Illuminator Aiming Lasers, which a technology retailer describes as being used for “night direct-fire aiming and illumination.” The NLG also raised concerns that Cleveland may deploy Stingray cellphone tracking devices to track down activists, as well as a Long Range Acoustical Device (LRAD), a crowd-control tool emitting painful sounds to force people to disperse.

The LRAD, which was designed after the al Qaeda bombing of the USS Cole in Yemen, in 2000, was originally intended for U.S. warships to warn off vessels approaching without permission. The device was used for the first time against protesters in 2009, during the G20 summit in Pittsburgh, and a bystander who suffered permanent hearing damage sued the city. Police departments across the country have continued to use the LRAD to disperse protests and rallies, including in Ferguson, Missouri, and New York City.

“That militarized equipment or any security equipment that they buy for the RNC remains there long after the delegates leave,” said Jocelyn Rosnick, a coordinator for the Ohio Chapter of the NLG. “We believe that people have a right to know what’s coming into their city.”

Cleveland also paid $1.5 million to an insurance broker to secure a $10 million policy for liabilities relating to the convention. “Protest insurance” has become common for cities hosting political conventions and is intended to protect the city and its employees, including officers, against any claims and losses arising from its role as RNC host, including its “law enforcement, safety, and security services,” city officials wrote in a call for bids. But the implication of the insurance policy — that the city assumes it will be sued over its handling of protests — doesn’t sit well with civil rights advocates. “These policies go far beyond general slip and fall type coverage,” said Rosnick. “They also indemnify the city for lawsuits related to constitutional violations and other civil liberties concerns.”

While Cleveland’s police have mostly responded to protests with restraint, for instance during the rallies following the killing by an officer of 12-year-old Tamir Rice, a Department of Justice investigation found that the department has engaged in a pattern of excessive force in its regular operations. In a December 2014 report, the DOJ determined that “insufficient accountability, inadequate training, ineffective policies, and inadequate engagement with the community” contributed to Cleveland police’s “use of unreasonable force.” Following the report, a police monitor was brought in, and reforms were promised. “But there hasn’t been enough time to fix anything,” said the ACLU’s Link, who questioned the department’s preparedness to handle the large number of protesters coming to town for the convention. “That’s the worry we have: This is not a sophisticated, well-run police department.”

The convention center itself is under the control of the Secret Service, which has imposed a separate set of restrictions, including a ban on weapons. An online petition to allow licensed owners to carry guns inside the convention center gathered nearly 55,000 signatures before it was revealed that it was set up as a parody by a gun-control advocate.

Protesters planning to rally outside — with or without permits — worry that poor planning by the city and the hateful rhetoric that has marked much of the Republican race may turn into a dangerous combination. Some have already elected to stay home out of fear of violence, leaving those choosing to protest at an even greater risk.

Bresler, of Organize Ohio, said he met with organizers of the pro-Trump camp and that both groups are committed to nonviolent protest. “But you don’t always know who’s going to come in and join, and what’s going to happen,” he added. Pensley, the career protester, predicts that only the more radical will show up in Cleveland, while both liberals and radicals will descend on Philadelphia, for the Democratic National Convention.

“A lot of people I know who usually would be protesting at both conventions are skipping out on Cleveland because they are scared,” he said. “And I don’t blame them.”