What is the best way to react to white supremacists energized by the referendum campaign in Britain and the rise of Donald Trump in the U.S. — with physical confrontation or verbal mockery? 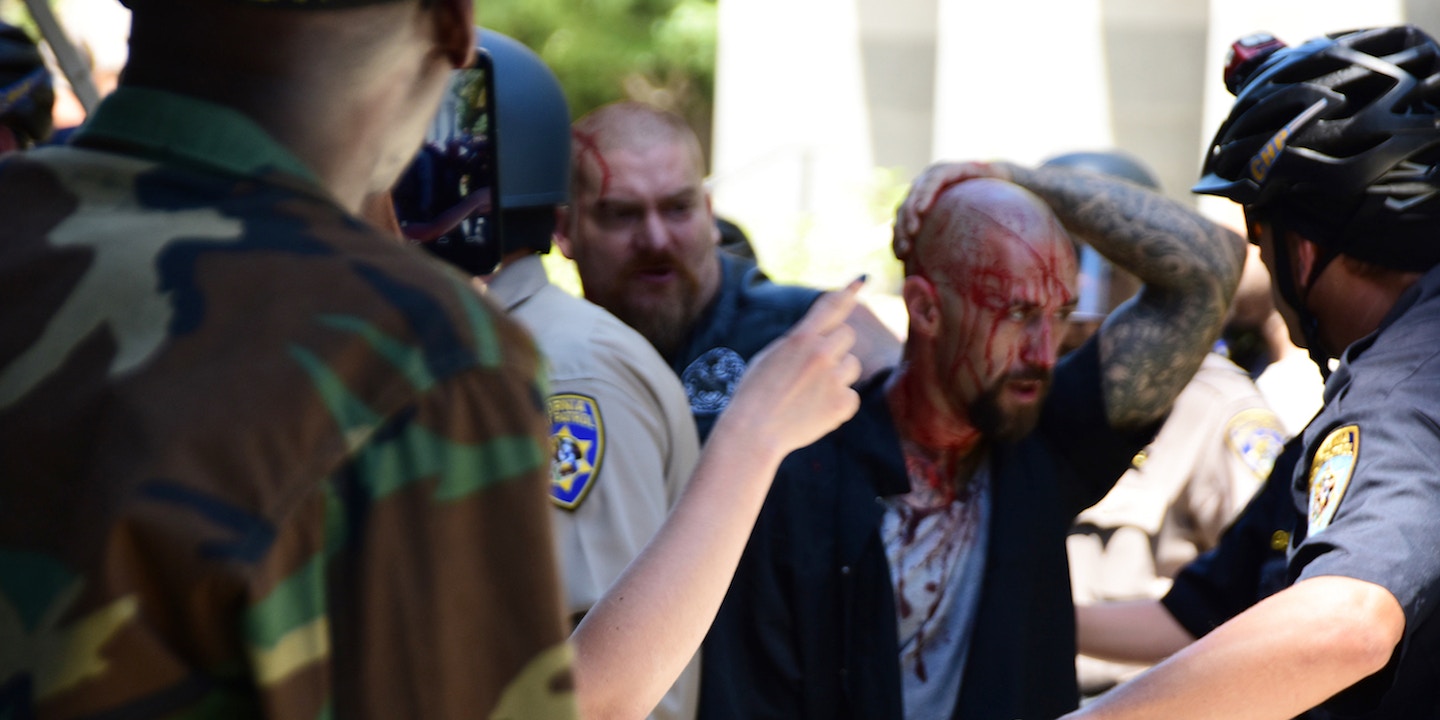 As my colleague Glenn Greenwald argues, it is too simple to suggest that last week’s rejection of the European Union by more than half of the British electorate, like Donald Trump’s victory in the Republican primary, can be explained by dismissing the voters as racists.

In both countries, and across the Western world, xenophobic bigots who pin the blame on foreigners and promise to restore prosperity by walling us off into ethnic-nationalist enclaves, have grown in prominence only after decades of failure by the traditional parties of left and right to find solutions for the suffering caused by globalization.

At the same time, however, it seems clear that the rhetoric of the referendum campaign in Britain, like Trump’s demonization of Mexican and Muslim immigrants, has emboldened the white supremacist fringe in ways too dangerous to ignore.

As the British historian Victoria Stiles observed, the referendum result, which has been followed by a 57 percent spike in reported hate crimes, seems to have encouraged the kind of public displays of racism in Britain that make physical assaults more likely.

The worry being that peer confirmation / peer approval is a crucial factor in violence against minority groups.

To look at just one of those cases, the racist taunting of a black man on a tram in Manchester on Wednesday caught on video, is to get a visceral sense of how real the potential for violence has become.

How, exactly, to confront such intolerance and keep it from spreading, is now an urgent question on both sides of the Atlantic. Two very different answers were proposed over the weekend by anti-racist activists in California and the north of England.

There was a spasm on violence on Sunday in Sacramento, where at least 10 people were injured when a handful of American neo-Nazis, who describe themselves as white nationalists, attempted to rally on the steps of the state Capitol, only to be attacked by a larger number of anti-fascist activists hurling insults and rocks.

These nazis made it to the capital steps and were attacked with sticks and concrete. #nonazisinsac pic.twitter.com/xyKFf4WDTS

Video posted online by reporters and activists showed street fights between white supremacists from the Traditionalist Worker Party, a neo-Nazi group that called the rally, and black-clad protesters from Anti-Fascist Action Sacramento and By Any Means Necessary, or BAMN, a coalition dedicated to taking “militant, direct action” to defend affirmative action, integration, and immigrant rights.

Insane video. Crowd sees any signs of "Nazis" and they run&attack. A lot of people bleeding/getting maced. @ABC10 pic.twitter.com/PoFhILfZ95

At least 10 people were treated for stab wounds, cuts, and bruises after the white nationalists were struck with pieces of concrete and then retreated — attacking protesters with clubs, knives, and fists as they fled.

After the melee, Yvette Felarca, a national organizer with BAMN — who was seen on video cursing at and punching one of the white nationalists — told the ABC News affiliate in Sacramento, “To us, there’s no free speech for fascists; they do not have the right to organize for genocide.”

“The Nazis and the fascists are dangerous,” she added. “They need to be stopped and shut down by any means necessary. We can’t just ignore them, because then they grow. They hold these rallies not to just talk to each other but trying to recruit — but today they looked as weak as they are. They had to run hiding and we want to make sure that happens … if they try to show their faces publicly again.”

#ANTIFA aren't fighting Nazis for fun.
We saw what happened when Nazis organized in Europe, and unlike liberals, we learned from the past.

In their online call for supporters to help “shut down the Nazi rally,” Antifa Sacramento noted that the founder of the Traditionalist Worker Party is Matthew Heim­bach, one of the most outspoken Trump supporters in the white supremacist community.

Heim­bach attracted national attention in March, when he was caught on camera shoving and screaming at a young black protester during a Trump rally in Louisville.

Leader of Neo-Nazi group involved in Sacramento stabbings is a Trump supporter who assaulted a black woman at rally. pic.twitter.com/TYxfswBHBN

The same day, he explained his support for Trump in a video interview with the Louisville Courier-Journal. “I like Donald Trump because he’s the only person that’s speaking to white working-class interests,” Heim­bach said, wearing one of Trump’s “Make America Great Again” baseball caps. “He’s the only candidate who’s standing up for us.”

“When his first comments came out about immigration, I was excited but a little wary,” Heimbach added. “But then when he doubled down … he’s been entirely consistent in defending and putting America first, putting our people first. That’s why I had to get behind him.”

Heimbach himself is not shy about tracing the roots of his white nationalist ideology to the Nazis. His YouTube channel features video of a speech he gave at a white supremacist retreat in Bakersfield, California, last year, illustrated with images of a Nuremberg rally and marches by contemporary neo-Nazi groups in Europe. “We are in a global struggle: Nationalism around the world is on the rise, the battle of the 21st century is going to be a war between nationalism and globalism,” Heimbach said in that address. “No matter who you are around the world, if you’re fighting for your national identity, your enemy is the international Jew.”

Unsurprisingly, Heimbach was thrilled by the British vote to exit the European Union, which he made clear on Twitter, sharing images of Oswald Mosley, who led the British Union of Fascists in the 1930s, and of a “degenerate” at London’s Pride parade who told Britain’s Channel 4 News he was disappointed by the result.

#Brexit is the greatest European nationalist victory since 1933. Mosley would be proud of his Homeland and people pic.twitter.com/dXXuWU4NWa

A Remain supporter condemning #Brexit. This is the degenerate face of the European Union. Secede to Survive! pic.twitter.com/yMpdmcpM7J

Heimbach was also quite pleased with the chaos in Sacramento on Sunday, writing on his website that he had called the rally “to make a statement about the precarious situation our race is in” after “witnessing the brutal assaults these cowards, drug addicts, illegal immigrants and criminals committed in orchestrated pogroms by Zionist agitated colored people against elderly people, women, children, and even the disabled at Donald Trump events.”

In this context, it is interesting to look at the very different way British anti-fascists responded to a similar rally in the city of Newcastle on Saturday staged by white nationalists from fringe groups like the English Defense League and the National Front.

My home town of Newcastle. This afternoon. I feel like I am back in the 1980s. pic.twitter.com/8THD1xsn1N

EDL fascism comes to the streets of Newcastle. #Brexit pic.twitter.com/BJSdPcBeRC

The fucking EDL marching in #Newcastle after #Brexit conjures images of Germany in 1930s. Bloddy scary. This time there'd be a bigger bang.

While several observers took the EDL march as a celebration of the referendum result, it seems important to note that it was planned well in advance of the political campaign, as was the robust counterdemonstration by anti-racist activists who vastly outnumbered the white supremacists.

While the activists in Newcastle have the same goal as their counterparts in Sacramento, to demoralize and embarrass the racists, their tactics were strikingly different: They met the marchers with nonviolence and hurled not rocks but derision at them.

Tensions are high at monument. Just shot a whole roll of film on my dinner break #Newcastle #nebloggers #ncl pic.twitter.com/msFvzQcaQq

As images of the rally and the counterdemonstration circulated widely over the weekend, Laura Pidcock, a local councillor in neighboring Northumberland, argued that the photographs, including one she took, had been mistaken for evidence of an uptick in racism in “post-Brexit Britain.”

“Just to be clear, the far-right have a history of street activity in Newcastle, they are always opposed and always out-numbered,” Pidcock wrote. “These ideas and attitudes have not just appeared since the referendum.”

“We must be careful,” she added, in terms that might make interesting reading for activists in Sacramento, “not to add to their sense of ‘victory,’ but respond to them in countering their ideas and joining together on the streets to demoralize their movement.”