Report: Blair was warned by British intelligence that terrorism would “increase in the event of war.”

Eleven years ago today, three suicide bombers attacked the London subway and a bus and killed 51 people. Almost immediately, it was obvious that retaliation for Britain’s invasion and destruction of Iraq was a major motive for the attackers.

Two of them said exactly that in videotapes they left behind: The attacks “will continue and pick up strengths till you pull your soldiers from Afghanistan and Iraq. … Until we feel security, you will be targets.” Then, less than a year later, a secret report from British military and intelligence chiefs concluded that “the war in Iraq contributed to the radicalization of the July 7 London bombers and is likely to continue to provoke extremism among British Muslims.” The secret report, leaked to The Observer, added: “Iraq is likely to be an important motivating factor for some time to come in the radicalization of British Muslims and for those extremists who view attacks against the U.K. as legitimate.” 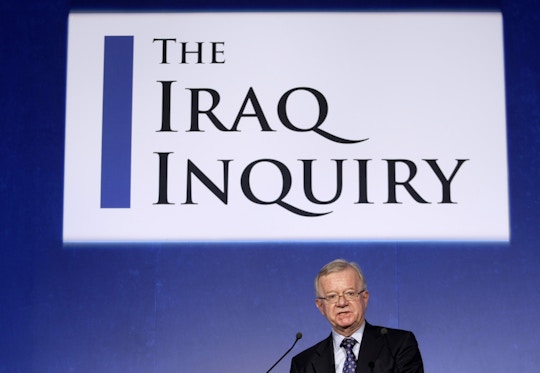 The release on Tuesday of the massive Chilcot report — which the New York Times called a “devastating critique of Tony Blair” — not only offers more proof of this causal link, but also reveals that Blair was expressly warned before the invasion that his actions would provoke al Qaeda attacks on the U.K. As my colleague Jon Schwarz reported yesterday, the report’s executive summary quotes Blair confirming he was “aware” of a warning by British intelligence that terrorism would “increase in the event of war, reflecting intensified anti-U.S./anti-Western sentiment in the Muslim world, including among Muslim communities in the West.”

None of this is the slightest bit surprising. Just as the British did, multiple Western intelligence agencies have long recognized (usually in secret) that at the top of the list of terrorism’s causes is the West’s militarism and interference in predominantly Muslim nations — as a 2004 Pentagon-commissioned report specified in listing the causes of terrorism: “American direct intervention in the Muslim world”; our “one-sided support in favor of Israel”; support for Islamic tyrannies in places like Egypt and Saudi Arabia; and, most of all, “the American occupation of Iraq and Afghanistan.” The report concluded: “Muslims do not ‘hate our freedom,’ but rather, they hate our policies.” Countless individuals who carried out or plotted attacks on the West have said the same.

Nobody should need official reports or statements from attackers to confirm what common sense makes clear: If you go around the world for years proclaiming yourself “at war,” bombing and occupying and otherwise interfering in numerous countries for your own ends — as the U.S. and U.K. have been doing for decades, long before 9/11 — some of those who identify with your victims will decide — choose — to retaliate with violence of their own. Even Tony Blair’s own Deputy Prime Minister John Prescott acknowledged this self-evident truth in 2015: “When I hear people talking about how people are radicalized, young Muslims — I’ll tell you how they are radicalized. Every time they watch the television where their families are worried, their kids are being killed or murdered and rockets, you know, firing on all these people, that’s what radicalizes them.”

Recognizing this fact is not — as is often absurdly claimed — a denial of agency. It is the opposite: an affirmation of agency, a recognition of how human beings make choices.

Despite how clear this causal connection is, it is still necessary to document because acknowledging it remains one of the West’s most harshly enforced taboos. In the U.K., those who pointed out that the Iraq War provoked this attack were — and still are — vilified. Tariq Ali recounts the vicious public repudiation he received when he raised the issue in a Guardian article the day after the attack. Tony Blair and his allies — acting out of self-absolution — continue to vehemently deny any causal connection. Last year, Ken Livingston was denounced in the harshest terms — accused of “siding with suicide bombers” — for highlighting how the attack on Iraq helped provoke the 7/7 attack. And then earlier this year, various Labour MPs denounced Jeremy Corbyn for the crime of linking these two events.

What we have here is an indisputable truth that has been turned into a harshly enforced taboo. No matter how much evidence mounts proving that Western aggression, violence, and domination fuels and provokes terror attacks, many influential factions still try to suppress this fact by decreeing it unspeakable. It’s obviously more comforting and pleasing to believe that one is purely the innocent victim of hideous violence rather than a participant in it, a perpetrator of it. But while that’s what motivates this refusal to acknowledge reality, it does not excuse it.

Not only did Tony Blair’s attack on Iraq provoke subsequent attacks on his own country, but he knew at the time he decided to attack Iraq that this would happen, because he was warned of it. The anniversary of these attacks is the ideal time to reflect on this causal connection, and this week’s Chilcot report — released the day before the anniversary of the 7/7 London attack — makes it impossible to ignore.