Piecing Together Witness Accounts of the Dallas Attack

Social networks were flooded with witness accounts of what happened in Dallas Thursday night. The Intercept is assembling pieces of that mosaic here. 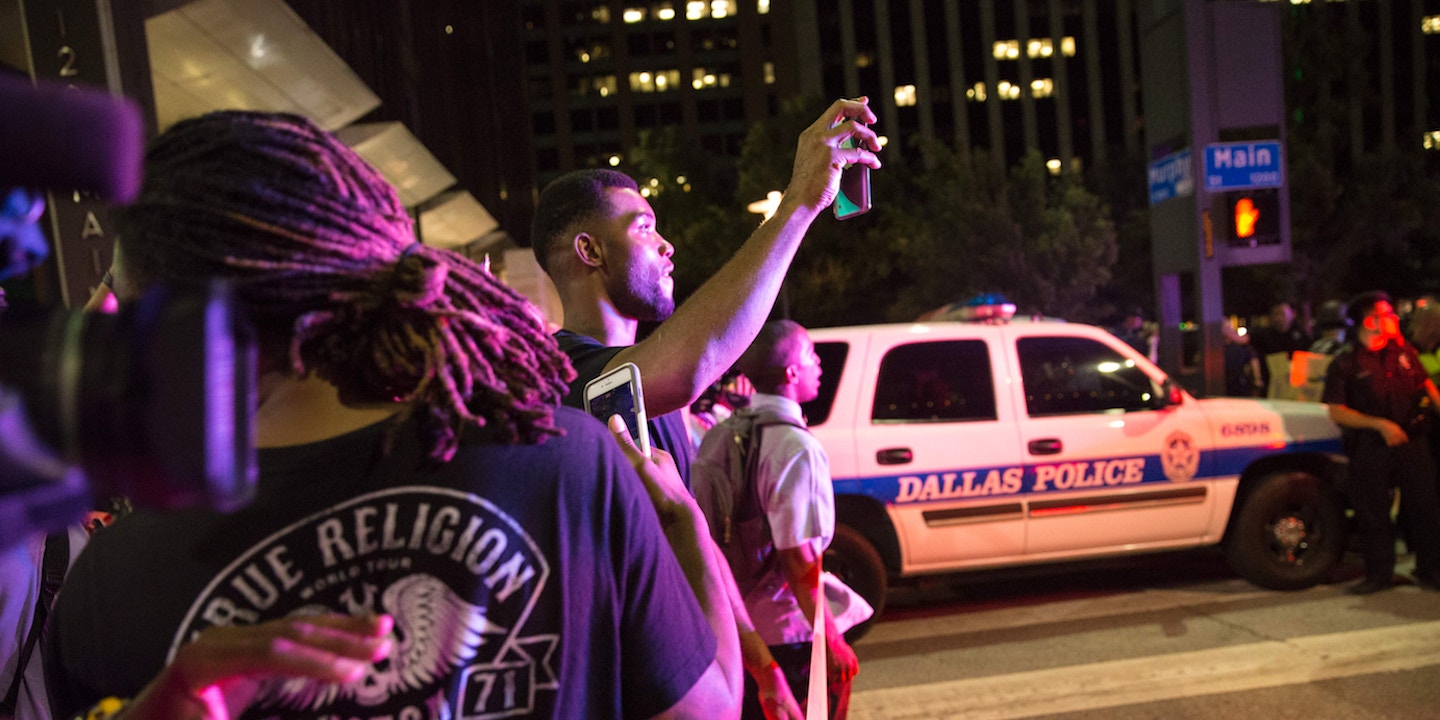 In the immediate aftermath of the deadly attack on police officers at a protest march in Dallas on Thursday that left at least five officers dead, social networks were flooded with witness accounts of what happened, in video clips and livestreams, photographs and text updates. The Intercept is assembling pieces of that mosaic here, starting with the accounts below, and will add more as we see them. Input from readers is welcome. Please share witness accounts I’ve missed in the comment thread below or on Twitter, @RobertMackey.

A photograph posted on Twitter at 8:12 p.m. local time by the Dallas Police Department showed smiling officers securing the event posing with a protester holding a placard that read, “No Justice, No Peace.”

At 8:45 p.m. the department uploaded a clip of marchers chanting in call and response: “What do we want? Justice! When do we want it? Now.”

A participant in the protest who identified herself as a 15-year-old girl posted video on Twitter at 8:55 p.m. showing marchers chanting “Hands Up! Don’t Shoot!” just before the attack started.

Seven minutes later, in tears, she shared a clip of the panic in the crowd as shots rang out.

In a live video stream on Facebook, which appeared to start at 8:59 p.m., a witness named Michael Kevin Bautista, who was covering the protest, broadcast a long exchange of fire between police officers and a gunman outside the El Centro College building at the corner of Main Street and North Lamar.

Another clip, posted on Twitter later by a comedian and video blogger who uses the name Goldie Gorilla, appeared to show an officer being gunned down outside the building.

Street level Video of one of the Officers Shot #DallasPoliceShooting #Dallas pic.twitter.com/oDwVeMWN5g

At 9 p.m. a man and a woman who live a block and a half away from the college both uploaded video shot from their living room window in which a stream of gunfire could be heard.

I am so scared. pic.twitter.com/jw88QnKGXG

Gunshots could also be heard in video recorded inside the college at 9:02 p.m. and uploaded to Facebook three minutes later by a witnesses named Patrick Cooper.

Sidney Johnson, who was covering the protest for Central Track, a local website focused on events in Dallas, recorded video of police officers pinned down by the shooting from a parking garage across the street from the college. Johnson later wrote a moving account of the march and the chaotic aftermath.

More video of the shoot-out, posted on Twitter by ABC News, seems to begin just a few seconds before the Central Track clip ends, and shows officers on Main Street facing the gunman.

Another clip, uploaded to Instagram by Sarah Noelle Hendrix, an El Centro culinary student, seems to have been shot from just beside Johnson in the parking garage.

CNN talked to a witness named Ismael Dejesus who had posted video on Facebook that appeared to show the gunman hiding behind the distinctive columns of the college building.

Witness Ismael Dejesus joins @donlemon to share the video he captured of the #Dallas shooting https://t.co/oBmEIv09rk

Perhaps the most arresting images, recorded by a witness named Randy Biart from the nearby Crowne Plaza Hotel, appeared to show the gunman firing a rifle from behind the columns of El Centro College.

This is amateur video of a suspect apparently firing a semi-automatic rifle in #Dallashttps://t.co/wSzB5NljBT

What appears to be a later section of Biart’s footage was broadcast by a local Fox News station and copied to YouTube by Matthew Keys, a former social media editor for Reuters who was convicted last year of helping members of the hacker group Anonymous. That section of the video includes distressing, graphic images of the gunman shooting a police officer at point-blank range during the firefight.

On Friday morning, at a news conference streamed on Periscope, Dallas Police Chief David Brown said that one gunman was killed by his officers after an hourslong standoff in a parking garage at El Centro College. Brown said the force killed the suspect with a bomb delivered by a robot after negotiations for his surrender broke down.

The gunman also told officers that he had left improvised explosive devices for them to find, Brown said. “The suspect stated that he was not affiliated with any groups,” the police chief added, “and he stated that he did this alone.”

Later in the day, the New York Times reported that the dead gunman, identified as Micah Xavier Johnson, 25, appeared to be the sole attacker, according to a senior law enforcement official.

Johnson, The Guardian reported, was an Army reservist who served in Afghanistan from November 2013 to July 2014, according to his service record.

What appears to have been his Facebook page was removed from the network on Friday afternoon, but it showed that he recently used a “Black Power” poster as his cover photo, and his most recent profile picture, uploaded six weeks ago, was of himself making that salute.

While the Dallas Police Department clearly made an effort to use social networks to document the peaceful nature of the protest before the attack and keep the public informed after it, the officers were somewhat reckless in the way they allowed rumors to spread about a man who was initially described as a suspect and then cleared.

At 10:52 p.m. the department posted a photograph of a man in a camouflage shirt marching in the protest earlier that night with a rifle strapped across his chest and asked for the public’s help in finding “one of our suspects.” 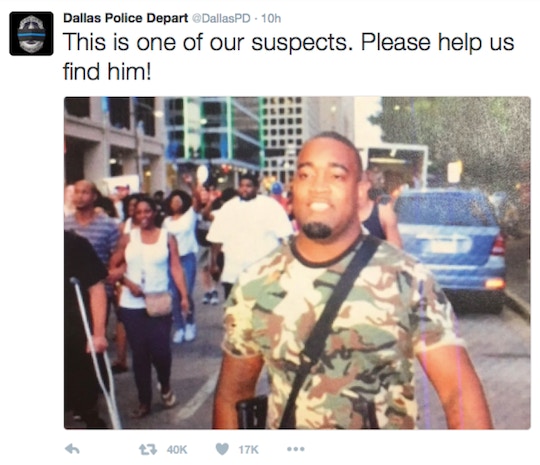 That tweet was taken down on Friday afternoon, but only after it had remained on the police department’s Twitter feed for more than 14 hours, despite the fact that the man, Mark Hughes, was not involved in the attack and was shown in a Facebook Live clip identifying himself to a police officer and handing over his weapon in the immediate aftermath of the attack.

Facebook video of DPD's original person of interest, handing over his weapon to authorities

The same photograph was provided to reporters and broadcast on the department’s Periscope channel almost two hours later as someone identified by the police chief as “a person of interest who witnesses at the scene say was involved in this shooting.”

In fact, video uploaded to Twitter at 9:06 p.m. by the Dallas Morning News photo desk showed Hughes — with his rifle still slung over his shoulder, pointing down — was among the protesters trying to figure out what had happened after the attack began.

Hughes was carrying his rifle because Texas law permits the “open carry” of long guns, and he is a believer in the Second Amendment, the Washington Post reported.

His brother, Cory Hughes, is a social activist who wrote on Instagram on Thursday that he had been asked to speak at the protest.

As soon as Mark Hughes found out that he had been identified as a person of interest, he approached the police.

In a Facebook Live update from the police interrogation room, Cory Hughes asked his followers to let the world know that his brother had nothing to do with the attack.

After Mark Hughes was interrogated by the police, he and his brother told the CBS News affiliate in Dallas that the officers had lied to Mark, saying they had witness accounts and video of him firing his gun.

Cory Hughes also said that he and his brother were getting death threats on Facebook and Twitter as a result of the department’s failure to adequately clear Mark’s name.

The news outlets that put this mans face on the news as a cop killer should PLASTER this picture on the screen. pic.twitter.com/eMGc0qPdmf

There was also evidence that even though those paying close attention to the story knew that Hughes was not involved, internet news algorithms were still associating him with the attack.

Google gives me this headline next to photo of innocent Mark Hughes. Automated news maybe not such a good idea? pic.twitter.com/8fkDnqwmgu

Although the “Justice for #AltonSterling #PhilandoCastile” rally on Thursday night was widely identified as a Black Lives Matter event, it was organized on Facebook by Jeff Hood, a pastor and activist, and Dominique Alexander, founder of the Next Generation Action Network. In a video interview with the Dallas Morning News on Friday, Hood said that one of the aims of the march was to help people channel the anger and rage they felt at the killing of the two men this week by the police into something positive.