Across Africa, 1,700 Navy SEALs, Army Green Berets, and other military personnel are carrying out 78 distinct “mission sets” in more than 20 nations, according to documents obtained by The Intercept. From east to west across Africa, 1,700 Navy SEALs, Army Green Berets, and other military personnel are carrying out 78 distinct “mission sets” in more than 20 nations, according to documents obtained by The Intercept via the Freedom of Information Act.

Equally complex is figuring out just what America’s most elite troops on the continent are actually doing, and who they are targeting.

In documents from a closed-door presentation delivered by Bolduc late last year and a recent, little-noticed question and answer with a military publication, the SOCAFRICA commander offered new clues about the shadow war currently being waged by American troops all across the continent.

“We operate in the Gray Zone, between traditional war and peace,” he informed a room of U.S., African, and European military personnel at the Special Operations Command Africa Commander’s Conference held in Garmisch, Germany, last November.

According to Bolduc’s 2015 presentation, SOCAFRICA is taking part in seven distinct operations, although he failed to elaborate further. Among the goals of these missions: to “enable friendly networks; disable enemy networks.”

The identities of most of those “enemy networks,” are, however, a well-kept secret.

Last fall, The Intercept revealed that Bolduc had publicly disclosed that there are nearly 50 terrorist organizations and “illicit groups” operating on the African continent. He identified only the Islamic State, al Shabaab, Boko Haram, al Qaeda in the Islamic Magreb, and the Lord’s Resistance Army by name or acronym, while mentioning the existence of another 43 groups. Despite repeated inquiries by The Intercept, however, neither the Department of Defense, U.S. Africa Command, nor SOCAFRICA would provide further information on the identities of any of the other organizations. 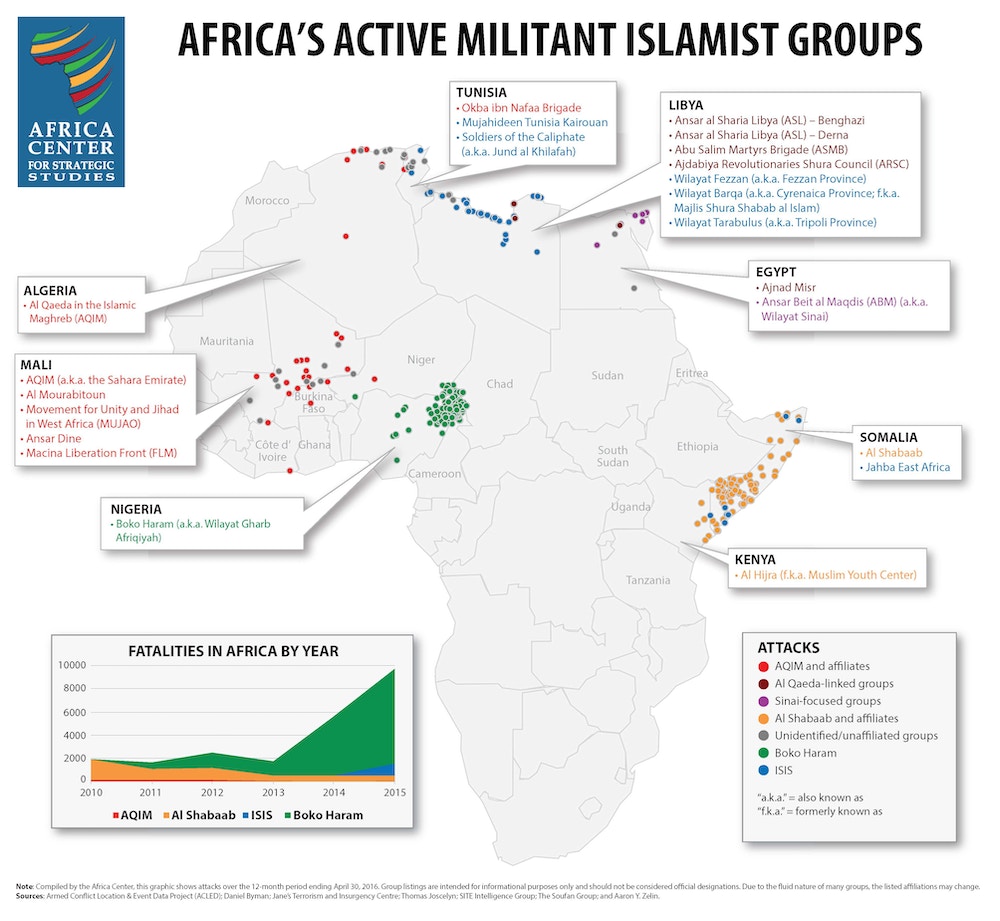 Recently, however, the Defense Department’s Africa Center for Strategic Studies — a research institution dedicated to the analysis of security issues in Africa — published a map listing “Africa’s Active Militant Islamist Groups.” In addition to usual suspects, it named 18 other terror organizations.

The Africa Center says that “group listings are intended for informational purposes only and should not be considered official designations.” It is, however, the most comprehensive list available from an agency or element within the Department of Defense and may shed light on Bolduc’s enemies list.

SOCAFRICA failed to respond to questions about that list or the names of its operations. U.S. Special Operations Command also declined to provide additional information. “We have no idea what BG Bolduc’s remarks were to a group of commanders who are subordinate to him,” spokesperson Ken McGraw told The Intercept.

Senegalese soldiers approach a room to be cleared during training near Thies, Senegal, Feb. 10, 2016.