Republican Sen. Ron Johnson lied about what he said to provoke Hillary Clinton’s exasperated comment, “What difference, at this point, does it make?” 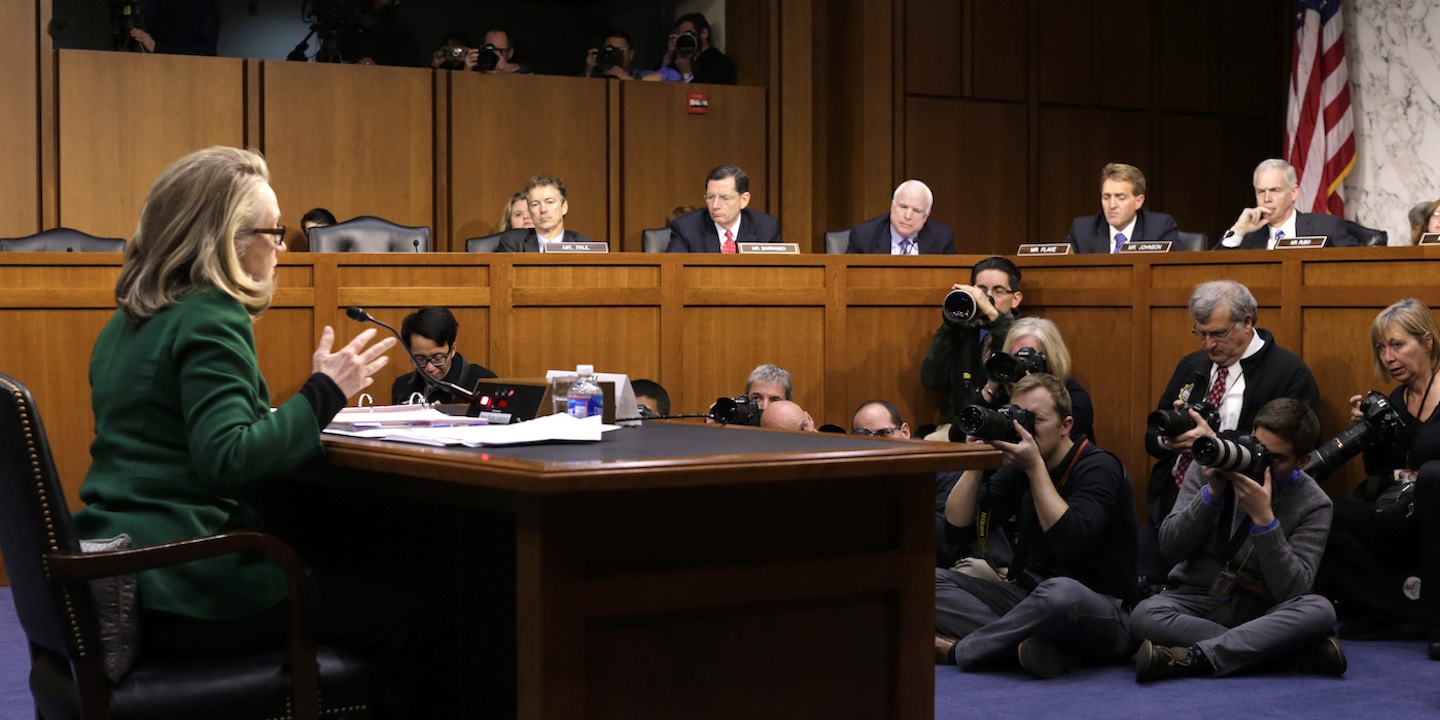 Sen. Ron Johnson, a Republican from Wisconsin who is in grave danger of losing his seat in November to Russ Feingold, opened his prime-time speech to his party’s convention on Tuesday night with a blatant lie about a comment Hillary Clinton made on Benghazi.

“Ladies and gentlemen, ‘What difference, at this point, does it make?’” Johnson began, quoting Clinton’s exasperated comment to him during a 2013 Senate committee hearing on her handling of the deadly attack on the American diplomatic and intelligence compound in Benghazi, Libya, the year before.

“I am the guy that got under her skin and provoked that infamous response from Hillary Clinton,” Johnson continued, “by asking a pretty simple question: ‘Why didn’t you just pick up the phone and call the survivors?’”

WATCH Ron's speech at the #RNCinCLE about the need for strong leadership #WISen #Benghazi #HillaryClintonhttps://t.co/Q6feMCBWSa

Even to those not steeped in the Republican catechism about Clinton’s supposed responsibility for the death of four Americans in the Libyan city of Benghazi on September 11, 2012, Johnson’s account of her testimony does make the former secretary of state sound very callous.

It is, however, wildly inaccurate, as the transcript and video of the televised exchange shows.

Clinton was, in fact, replying not to Johnson’s suggestion that she should call the survivors of the attack on the diplomatic and intelligence compound, but to his veiled insinuation that she and other officials had lied about the violence possibly stemming from protests that day about an Egyptian-American’s video mocking the Prophet Muhammad posted on YouTube.

Earlier in the exchange, Johnson did ask Clinton, “Do you disagree with me that a simple phone call to those evacuees to determine what happened wouldn’t have ascertained immediately that there was no protest? That was a piece of information that could have been easily, easily obtained?” Clinton did not agree and attempted to explain why, but Johnson interrupted her three times before she responded forcefully to his claim that the administration had “misled” Congress.

Clinton: With all due respect, the fact is we had four dead Americans. Was it because of a protest or was it because of guys out for a walk one night who decided that they’d they go kill some Americans? What difference at this point does it make? It is our job to figure out what happened and do everything we can to prevent it from ever happening again, senator. Now, honestly, I will do my best to answer your questions about this, but the fact is that people were trying in real time to get to the best information. The IC has a process, I understand, going with the other committees to explain how these talking points came out. But you know, to be clear, it is, from my perspective, less important today looking backwards as to why these militants decided they did it than to find them and bring them to justice, and then maybe we’ll figure out what was going on in the meantime.

It has become an article of faith among Republicans that the anti-Islam video, which had sparked protests in Cairo in the hours before the attack in Benghazi, and across the Arab world in the days after it, had absolutely nothing to do with the killing of the Americans. Inside that bubble, carefully nurtured by Fox News, any suggestion that the offensive video — a trailer for a film biography of the prophet made to antagonize Muslims — acted as a catalyst for the assault by Islamist militants was part of a cover-up by the Obama administration.

According to a subsequent investigation by New York Times reporters, however, “extensive interviews with Libyans in Benghazi who had direct knowledge of the attack” suggested that the violence was indeed “fueled in large part by anger at an American-made video denigrating Islam.”

What makes Johnson’s lie about what Clinton was referring to in the exchange with him all the more egregious is that he only brought it up to argue that her conduct in the aftermath of the attack demonstrated that she was unfit to be president because she had lied about it.

Rather than find out exactly what happened during the attack, Johnson told the convention, “She hatched a cover-up story and repeatedly lied to the American people; she even lied to the surviving family members of America’s fallen heroes.”

“Think about that for a moment,” Johnson said, scanning the crowd before looking directly into the camera to add, “she looked those family members right in the eye, and then she lied.”