The TPP would expand corporate and investor rights at the expense of medical affordability, the environment, and labor rights. 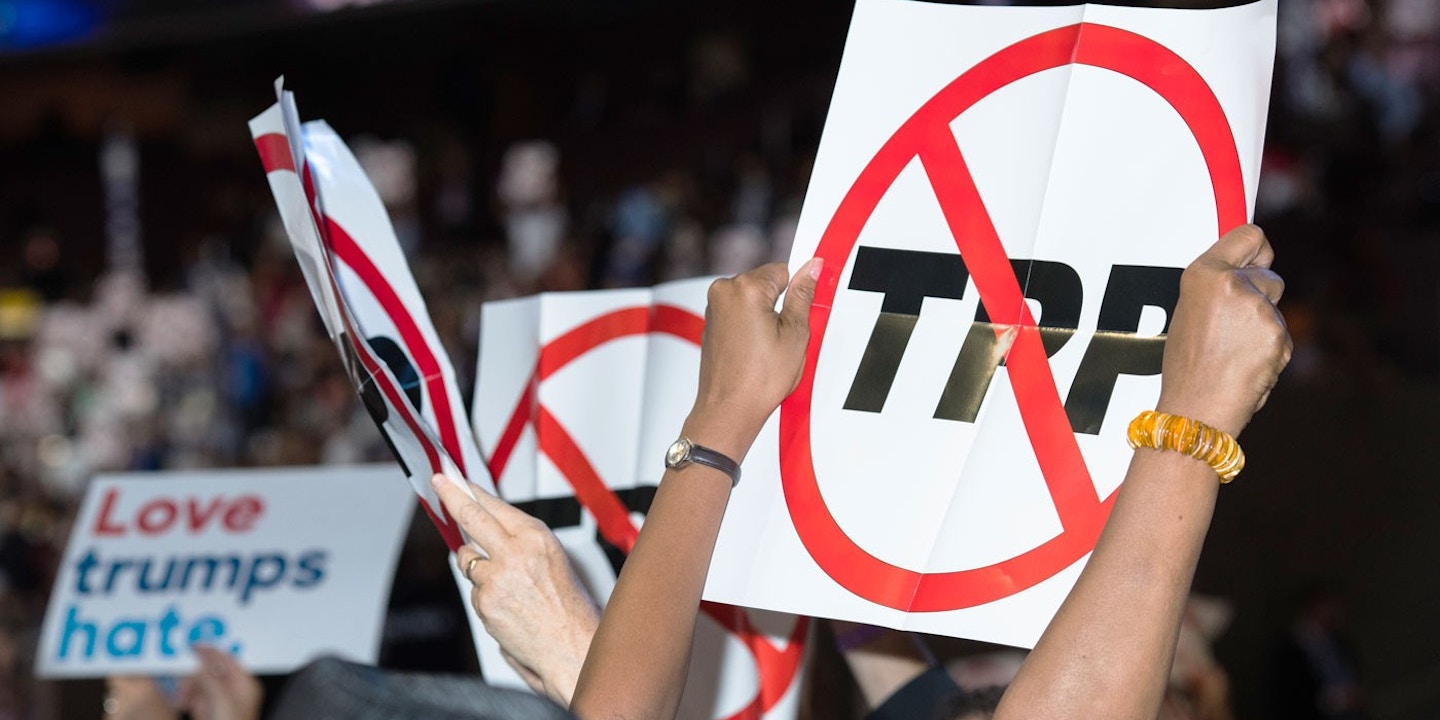 Hillary Clinton and Bernie Sanders both now oppose the Trans-Pacific Partnership (TPP) — so why were so many Bernie Sanders delegates yelling about it Monday night and waving anti-TPP signs over their head?

The TPP has become a hot-button issue for a lot of progressives who want the party to take a more anti-corporate tone.

Some of the opposition comes from bad memories of the lost jobs that came in the wake of the NAFTA agreement in the 1990s. But the TPP is not actually a free trade pact. It won’t lower tariffs, the most common trade barriers.

In fact, the TPP is more focused on crafting regulatory regimes that benefit certain industries. It would expand corporate and investor rights at the expense of medical affordability, the environment, and labor rights.

For Bernie Sanders supporters — and some Trump supporters — the TPP has become shorthand for corporate control of the political process. Hillary Clinton was a late convert — and not particularly sincere at that.

So that’s why you saw Sanders delegates waving their sign around — and that’s why some of them plan to make their opposition known Wednesday night when the pact’s foremost proponent, President Barack Obama, speaks on the convention floor.

It’s not just a matter of principle either. Although Obama is leaving office, opponents of the pact worry that the next five months offer him an opportunity to seek a final vote on the agreement, including during the crucial lame-duck session after the election, but before inauguration.

Utah Sanders delegate Cheryl Butler told The Intercept that she anticipates the same raucous chants and sign-waving against the TPP that took place on the DNC floor on Monday.

“I think people that are very strongly against the TPP have a right and responsibility to make their voices heard,” she said.

Early Tuesday morning, during Oregon’s state party meeting, delegates broke out into chants of “No TPP!” during a speech by its Democratic Sen. Ron Wyden, who supports the agreement.

Jeremy Likens, a Sanders delegate from Oregon, explained that the campaign’s delegates came to the convention to move the party on issues, not just to support the Vermont senator.

“We’re here; we’re informed voters who care about things, like making sure to stop the TPP,” he said.

Carolanne Fry, another pledged Sanders delegate from Oregon, said she has met numerous Clinton delegates who also oppose the TPP, but that they didn’t appreciate the sign-waving tactics on Monday. “They were getting really frustrated that we were holding them,” she reflected.

Indeed, several Clinton delegates told The Intercept that they trusted Clinton’s judgment on the issue and would not take part in any protests of Obama’s speech.

Elena McCullough, who serves as the vice president of the Democratic Hispanic Caucus of Florida and as an at-large delegate for Clinton from Florida, said she prefers to trust her candidate over taking protest action.

Jamian Smith, a Clinton delegate from Washington state, said she’s “pretty sure” that delegates from her delegation, which is overwhelmingly made up of Sanders backers, will engage in some sort of protest during Obama’s speech. She, however, had no intention of joining them.

“I think the TPP could be improved. I don’t think that it’s necessary to completely scuttle it,” she said. “We prefer to go in the system. … holding up signs is great, you’re making your voice heard, but nothing’s really being done when you do that.”

Victor Quiroz, a Clinton delegate from California, sported an anti-TPP button. Yet he opposed making any sort of public statement during Obama’s speech. He was confident that Clinton would maintain her position.

“You don’t … embarrass your chief. You do not do that,” he instructed, opposing any protests. “Secretary Clinton, she opposes TPP.”