The “mothers of the movement” took the stage at the Democratic convention where they read the names of black victims of police violence. 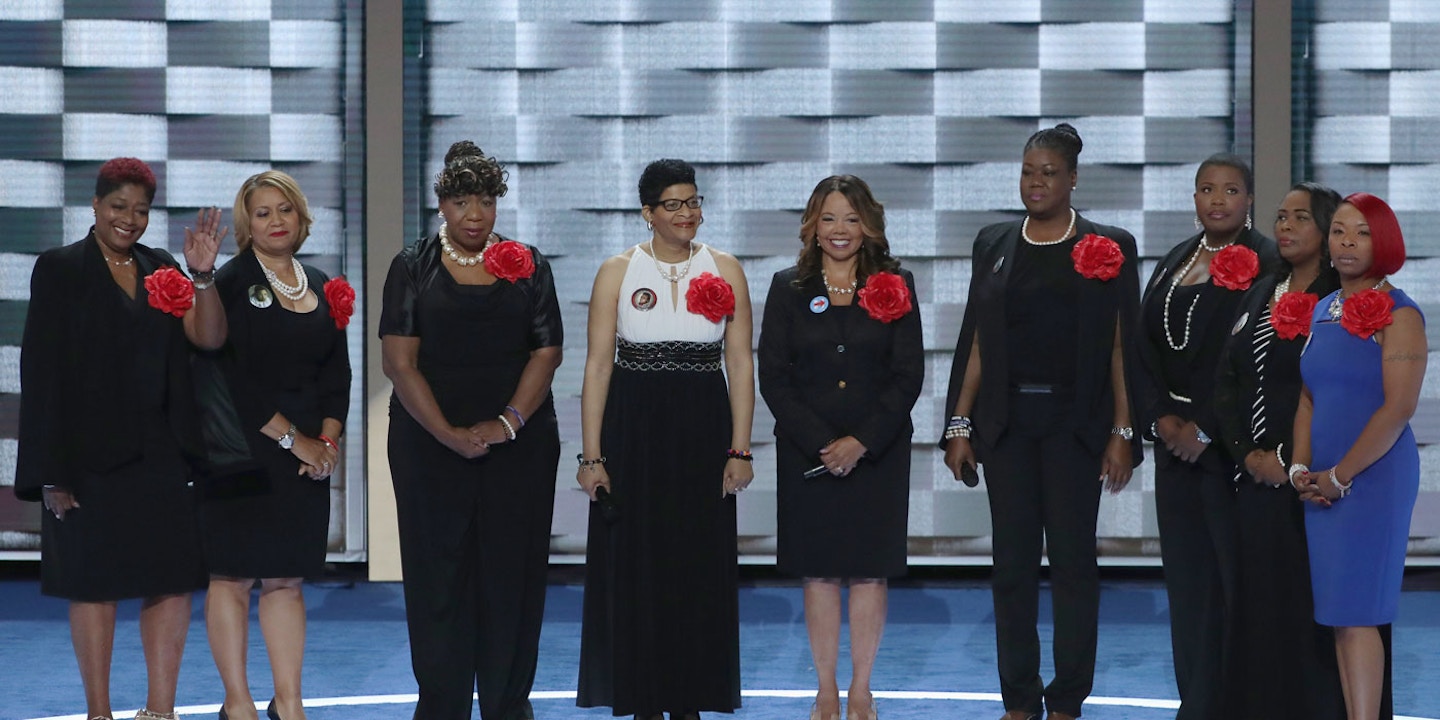 One of the most poignant moments of the Democratic National Convention came on Tuesday night, as Geneva Reed-Veal took the stage. “One year ago yesterday, I lived the worst nightmare anyone could imagine,” she said. “I watched as my daughter, Sandra Bland, was lowered into the ground in a coffin.”

Bland was found “hanging in a jail cell after an unlawful traffic stop and an unlawful arrest,” she continued. Six other women died in custody that same month, she then added, before reciting their rarely heard names one by one. “I’m here with Hillary Clinton because she is a leader and a mother who will say our children’s names.”

“Saying the names” of those killed by police, in custody, or in acts of racist violence, has become a ritual since the deaths of Trayvon Martin and Michael Brown, whose mothers were also on stage at the DNC, together with Reed-Veal and six other women — the “mothers of the movement,” as they have been called.

Going through endless list of people killed by police, it's been going on for at least 20 min #BlackDNCResistance pic.twitter.com/SuzJ9pj44k

Just hours before they took their call for justice and an end to violence to the national stage, a similar ritual took place across the city in North Philadelphia, where dozens of protesters had gathered for a “Black DNC Resistance March.” They too, paid tribute to victims of police violence, as a woman standing on the back of a pick-up track read dozens of names, some well-known, most not, into a loudspeaker, handing out sign after sign carrying each name and turning the crowd into a sea of names of the dead. She read names for at least 20 minutes, without pause.

At the same time, in another part of Philadelphia, at an art exhibit titled “Truth to Power,” residents and DNC visitors walked around provocative installations portraying police violence, mass incarceration, and racism. They walked through a sea of tags floating from the ceiling, carrying the names of 613 people killed by police in 2016 alone, and a couple items from police reports to describe their lives and deaths. Some blank tags floated as well. “By the time this show closes, we estimate another 15 names will be added to the piece,” a caption read.

But while the pain and anger over police killings of mostly Black and brown men and women resonated across Philadelphia, outside the convention center people expressed deep disillusion in the political class and Democratic nominee to be able or willing to do what it would take to put an end to them.

As Martin’s mother said that Clinton has “the courage to lead the fight for common-sense gun legislation,” and Jordan Davis’s mother Lucia McBath said “Hillary Clinton isn’t afraid to say black lives matter,” protesters on the streets carried a banner saying “Hillary, You’re not welcome here.” As former Attorney General Eric Holder took the DNC stage to say that Clinton “has talked about systemic racism in a way that no one else has” and “will help our nation summon the courage to face racial injustice and face down the legacy of our darkest past,” protesters in the streets chanted “Don’t vote for Hillary, she’s killing black people.”

“There’s a complete disconnect between us and the people up on top,” said Adeola Adesida, who marched with a sign asking “Who killed Tamir Rice?” and the answers, “A) Cops B) Institutional racism C) GOP/DNC/ ABC/ CBS/ NBC/ FOX D) Corporate AmeriKKKa E) All of the above.” “Maybe the actual people inside the DNC are not paying attention, but this is for you and me and everyone else to be aware of,” she added. ”And eventually when all these people are aware, the people on top, like those at the DNC, are going to have to pay attention.”

“We are more than them,” echoed Ysanel Torres, a 19-year-old student who carried a “You are armed, I am not sign” and the words “I’m not sorry” on her shirt. “The DNC has been overshadowing the conversation of Black Lives Matter and this is the conversation that should be the biggest, and is the biggest concern in the US currently.”

“But regardless of if they’re listening now, they’ll be listening soon. Maybe this sounds disruptive to some people, I think it’s disruptive that they’ve been killing us,” she said, adding “Fuck Hillary, Fuck the police.” “I don’t think she’ll be doing anything supportive for us after this week.”

In fact, the Black DNC resistance march — which drew so many white protesters that at some point organizers had to ask “all white people to move to the back” — was little different in sentiment from all other protests in Philadelphia this week: if the emphasis now was on black lives, the sense of anger, disenchantment, and complete lack of confidence in the political system in general and the Democratic Party in particular had been voiced all week long, and captured in cynical streets signs like “If voting could change anything they wouldn’t let us do it.”

“I can’t trust them to do work from the inside, we have to do the work from the outside,” said Jamhar James, who with three other men was carrying a “DNC” coffin down the streets of Philadelphia. “They can’t do it because they don’t understand us.”

James said he “almost cried” when Obama was elected in 2008, but didn’t vote for him four years later. A Bernie Sanders supporter contemplating a switch to Jill Stein, he slammed Democrats for allowing the Voting Rights Act to be “gutted” on their watch. But he also recognized, commenting on the white crowd at the march, that many black people felt so checked out from the political process that even protest seemed futile.

“More and more black people just feel disenfranchised and don’t feel part of the system,” he said. “Why would they come here and protest? Even if they live up in North Philly, why would they come down here? They’ll say, ain’t nothing gonna happen. But we have to show them that it is, or that it can happen.”

While the so-called “black vote” remains solidly with the Democratic Party and Hillary Clinton, whose convention so far has been filled with the support of prominent black individuals, from Michelle Obama to Alicia Keys, and unprecedented talk of racial justice —  that support was not granted and was quickly eroding, some warned.

“Historically the Republicans were so racist – well, after the Democrats stopped being the party of the slave holders — that Democrats kind of looked good, and a lot of black folks were desperate and almost felt like they had to cling on to something,” said John Parker, who was at the march and recently lost a run for U.S. Senate in California, where he ran as a Peace and Freedom Party candidate. “That’s what the Dems held over them, but people are starting to see that they’re not helping.”

“They’ll tell you, we’ll get in office, don’t worry about it, we’ll take care of it, don’t go out and protest, and when the movement dies down, repression gets higher,” he said, adding that it was particularly “hypocritical” of the Clintons to portray themselves as champions of racial justice when they were the ones behind “all those laws that have caused so many black and brown people to be in jail.”

If not all criticism of Clinton and the DNC’s racial justice platform was as angry as that poured onto the streets of Philadelphia on Tuesday, many advocates of sweeping police and criminal justice reform remained skeptical.

“It’s OK for Democrats to say sentencing reform or more training for cops but they need to get specific,” said Scott Roberts, a campaign director for Color of Change, a group that is fighting to defund abusive police departments. “It’s a very powerful thing to bring those women out and unless you’re really ready to have solutions and be accountable, that’s touchy to me,” he added, referring to the Mothers of the Movement. “We’re going to be looking for real specifics from Hillary in terms of how she wants to deal with these policing issues.”

Russell's self portrait, made with his prison papers #TruthToPower #DemsInPhilly pic.twitter.com/ppnqdD5fYo

Color of Change was one of several groups discussing criminal justice reform at the “Truth To Power” art exhibit, where visitors walked by black and white paintings portraying the killings of Walter Scott and Eric Garner. Another painting showed black parents having “The Talk” with their child as a television screen flashed news of “no indictment in police shooting of unarmed youth.”

A giant map of the United States made of guns hanging from a ceiling was titled “Identity Crisis,” and piece after piece spoke of social justice issues organizers of the event hope would make it into the policy priorities of those at the DNC.

Philadelphia artist Russell Craig stood in front his wall-sized self-portrait, painted over pages of his incarceration and probation paperwork and broken into four panels that made him look as if he were the target of a gun’s viewfinder. “I’m being targeted by a system of mass incarceration and of them shooting black people on camera and getting away with it,” he said. “There’s lot of stuff that’s going on and there’s nobody doing nothing about it. I don’t know where they’re at.”