Israeli officials are seeking to pressure Facebook to take down posts they insist incite violence. But critics fear this is another attempt to censor Palestinians’ legitimate free speech. 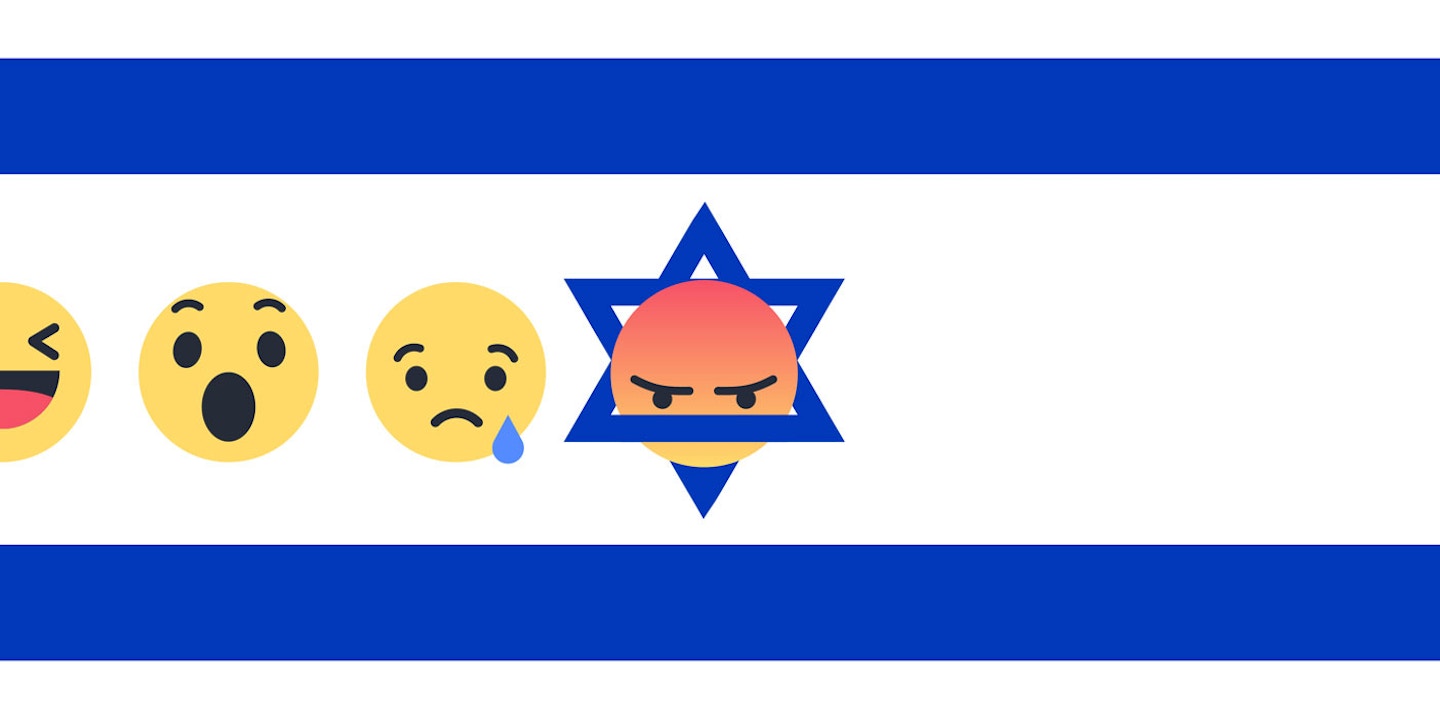 Two days after a Palestinian teen fatally stabbed an Israeli girl, an Israeli official blamed an American living thousands of miles away for the crime, as well as similar attacks.

“Some of the victims’ blood is on Zuckerberg’s hands,” Gilad Erdan, Israel’s public security minister, said on Israeli television in early July, referring to Mark Zuckerberg, the head of social media giant Facebook. Erdan called Facebook a “monster” because it has become the platform of choice for Palestinians to denounce Israeli rule and broadcast their intention to attack Israelis. Muhammad Tarayra, the 17-year-old Palestinian behind the June 30 knife attack in the settlement of Kiryat Arba, had written on Facebook that “death is a right and I demand my right.” He expressed anger that Israeli soldiers had killed his cousin after he tried to run over them, according to Israeli news reports.

Now, Israeli officials are seeking to pressure Facebook to take down posts similar to Tarayra’s. On July 13, Erdan and Ayelet Shaked, Israel’s justice minister, submitted a bill to the Israeli Knesset that would empower courts to compel Facebook to remove content deemed violent. And amid Israel’s legislative push against Facebook — including a separate measure that would see Facebook fined if it did not remove content inciting people to terrorism — an Israeli law firm has also filed suit against the social media company in a U.S. court.

The moves amount to a multi-pronged campaign aimed at Facebook, which has been increasingly drawn into the Israeli-Palestinian conflict. Israeli ministers have cast Facebook in the role of terror supporter and now want to force the company to police Palestinian speech they say leads to violence.

But Israeli laws against incitement have also been used to arrest Palestinians whose Facebook posts criticize Israeli rule but do not explicitly support violence. Palestinians say that Facebook does not fuel militant attacks against Israel and that it is Israel’s decadeslong occupation and discriminatory policies against Palestinians that lead to violence. The mother of a 13-year-old Israeli girl who was fatally stabbed by a Palestinian attacker mourns during her funeral in the Kiryat Arba settlement outside Hebron, June 30, 2016.

Yousef Jabareen, a Palestinian Knesset member with the Joint List coalition of Palestinian parties, told The Intercept that the proposed bill would violate freedom of expression. “We are afraid that, basically, such a law will be used to target legitimate critique against the occupation,” he said.

Facebook did not respond to questions about the Israeli legislation. But the company told Reuters it works “regularly with safety organizations and policymakers around the world, including Israel, to ensure that people know how to make safe use of Facebook. There is no room for content that promotes violence, direct threats, terrorist or hate speeches on our platform.”

Israeli officials have been railing against Facebook since October 2015, when cases emerged of Palestinians stabbing Israelis as part of what some call the “knife intifada.” Shaked, the justice minister, has met with Facebook officials to pressure them to take action against incitement. At a conference in Hungary in June, she said that Facebook, Twitter, and Google remove 70 percent of violent content in Israel. The offices of Shaked and Erdan did not respond to requests for comment for this story.

In 2015, Facebook took down 431 pieces of content that it said violated harassment laws or denied the Holocaust, which is against the law in Israel. And Facebook’s report on government requests shows that last year, Facebook handed over user data to Israeli authorities for about 60 percent of the 468 requests it received.

Some of those requests pertain to Palestinians swept up in Israel’s dragnet targeting social media users who post messages against Israeli wars and occupation. As The Intercept reported, the Israeli police detained Sohaib Zahda, a Palestinian activist, in August 2014 after he wrote angry messages about an Israeli commander on a Facebook page he ran. While he was in custody, the Israeli police sent an order to Facebook for data about Zahda’s page. The company complied, according to Zahda’s lawyer.

In a later interview, she added: “The state of Israel’s human rights record vis-a-vis Palestinians is not great. It’s incredibly troubling” that Facebook gives Israel information on Palestinians.

Israeli authorities want Facebook to do more. During his interview with Israeli news outlet Channel 2, Erdan complained that Facebook “sabotages” Israeli police work because it does not cooperate with requests pertaining to residents of the occupied West Bank. Israel has ruled the West Bank since 1967, when it captured the territory during the Six Day War, but much of the world does not recognize Israeli sovereignty there.

Facebook has also refused some requests for data on Palestinian citizens of Israel. In October 2015, when the Israeli police sent a legal order to Facebook requesting “all records” on and the IP address of Dareen Tatour, a citizen arrested for Facebook posts and a YouTube poem, Facebook and Google, which owns YouTube, did not respond to the order, Tatour’s lawyer Abed Fahoum told The Intercept. 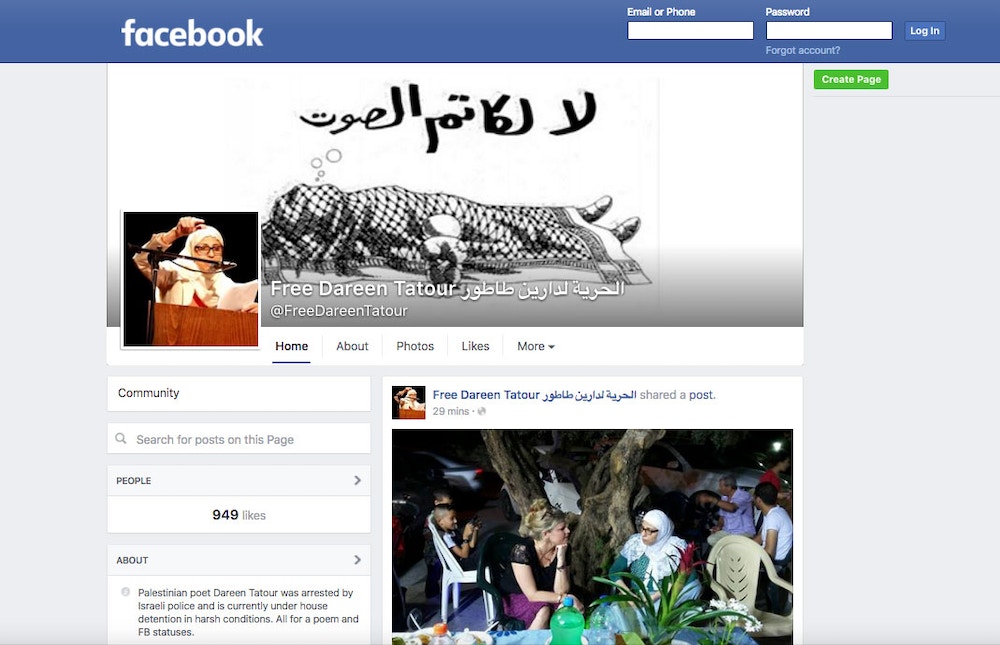 Screen grab of the “Free Dareen Tatour” Facebook page set up in response to the arrest of the Palestinian poet by Israeli police based on her status updates and poems.

The bill pushed by Erdan and Shaked seeks to force Facebook to take down content that an Israeli court deems a threat to Israeli security, though Facebook would have the ability to appeal such an order. An Israeli prosecutor could introduce the state’s confidential information as part of a case seeking to take down a Facebook post.

On July 17, the Knesset’s Ministerial Committee for Legislation, which determines whether the ruling coalition will support a bill, approved a separate piece of legislation that would fine Internet companies $78,000 if they do not take down content deemed “incitement” within two days. The bill, which would require Facebook to monitor its own network for such content, easily passed a preliminary Knesset vote on July 20.

“I don’t think Facebook is responsible for terror or for the terror wave,” said Zionist Union Knesset member Revital Swid, who introduced the bill. “But they can do a lot to prevent [attacks].”

Swid insists her proposed bill would not infringe on freedom of speech, and she would prefer that Facebook monitor and take down such postings voluntarily. “Telling someone to go and to do terror acts, that’s not freedom of speech,” said Swid, who explained that her legislation is narrowly tailored to focus on posts that call for terrorism.

The campaign to pressure Facebook to censor its users has also made its way to the United States, where the company is headquartered. On July 11, the Israeli legal center Shurat HaDin sued Facebook in U.S. federal court on behalf of the families of U.S. citizens killed by Palestinian attackers in Israel.

A 2007 State Department cable released by WikiLeaks quotes the center’s head, Nitsana Darshan-Leitner, as saying that in its early years, Shurat HaDin took direction from the Israeli government on what cases to file. However, she now strenuously denies ever saying that to a U.S. diplomat.

The Shurat HaDin lawsuit alleges that Facebook “knowingly” provided material support to Hamas because the Palestinian militant group has “used and relied on Facebook’s online social network platform and communications services” to carry out terrorism. Under U.S. law, it is illegal to provide material support — including any service-like communications equipment — to a group, like Hamas, on the U.S. designated terrorist list maintained by the State Department.

A Facebook spokesperson described the lawsuit as “without merit,” adding that the company has a “set of Community Standards to help people understand what is allowed on Facebook, and we urge people to use our reporting tools if they find content that they believe violates our standards so we can investigate and take swift action.” A house in the West Bank belonging to a Palestinian man who carried out a knife attack in March, in which an U.S. tourist was killed, was demolished by Israeli security forces, June 21, 2016.

“Facebook, the all-American, social media, 21st century, billion-dollar business is providing the communications system and advertising system for this terrorist group that is only too happy, by their stated intent, to kill and maim civilians,” said Bob Tolchin, who is U.S. counsel on this suit and frequently works with Shurat HaDin.

Some observers think the suit against Facebook has a chance of advancing through the U.S. court system. Writing on the blog Lawfare, legal analysts Benjamin Wittes and Zoe Bedell said that Shurat HaDin makes a strong case that Hamas’s use of Facebook — including posts calling for violence — helps cause militant action that has killed Israelis.

But Aaron Mackey, a legal fellow at the Electronic Frontier Foundation, said the plaintiffs in the suit have a high legal barrier to clear in the case. He said the suit does not establish that Facebook helped cause the attacks and the Communications Decency Act broadly immunizes Facebook from liability for content on its platform.

If the lawsuit is successful, however, the consequences could be profound, he said. It could lead to certain parts of the world being cut off from Facebook, or certain users’ posts being censored if they mention Hamas or the Israeli-Palestinian conflict.

Mackey described the lawsuit, coupled with Israel’s push against incitement on Facebook and proposed U.S. legislation requiring social media companies to report terrorist-related content to law enforcement, as part of a broader strategy.

“These are all small strategies as part of a larger goal to force Facebook and Twitter to become the sort of active police for certain types of speech and content,” he said. “But what that’s ultimately going to mean is less speech about things that these governments disagree with.”

Dena Shunra translated sections of the Shaked-Erdan Knesset bill on Facebook from Hebrew to English.